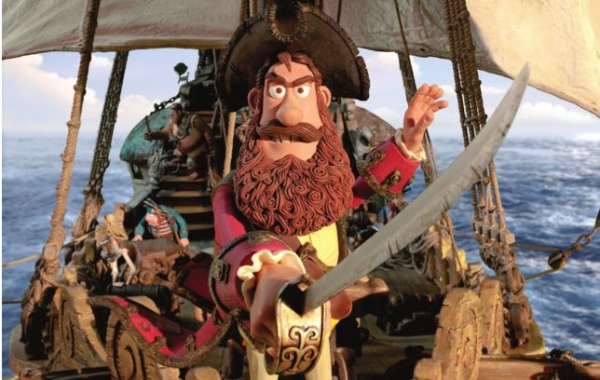 ‘The Pirates! Band of Misfits’ fires an errant cannonball%u2028

It’s hard not to mention Chicken Run without wanting to make a joke about Mel Gibson voicing a rooster. And while that may be the lasting thought from the 2000 movie, the fact remains that it was an affable claymation adventure from Aardman Animations that holds up well when compared with the relentless CGI dreck that has infested theaters over the last decade-plus. So when The Pirates! Band of Misfits was announced, the general reaction was curiosity and muted enthusiasm. It would have been more intense anticipation, but admitting you’re excited for a cartoon sometimes puts you on watch lists.

Sadly, Pirates is neither quite engaging enough for children nor quite intelligent enough for adults, despite featuring the inclusion of Charles Darwin, which may be an animated first. The film follows a pirate captain named Pirate Captain, which is the most on-the-nose name since Dirk Diggler.

Pirate Captain, voiced by former hooker enthusiast Hugh Grant, is sad that he continues to lose the Pirate of the Year award to folks like Black Bellamy ( Jeremy Piven), Cutlass Liz (Salma Hayek) and Peg Leg Hastings (Lenny Henry). But the goofy, well-intentioned leader has a plan … sort of.

A chance meeting with Charles Darwin (David Tennant) reveals that the Pirate Captain’s parrot is actually a dodo bird. So, with the help of Darwin’s sidekick, a man-panzee named Mr. Bobo, the gang heads into the heart of the empire ruled by the pirate-loathing Queen Victoria (Imelda Staunton) to compete in a scientific competition that may just net Pirate Captain his coveted title. Also, evolution is joked about, which also may be a first for an animated movie.

Here’s the major problem with the largely good-lookin’ Pirates: it’s boring. And not just for adults! Had this been jam-packed with wedgies and fart jokes, it would have at least been understandable. The truth is, the film is just far too slow for anyone with a pulse, whether they poo in public or not. Whereas Chicken Run had a clever script to support the painstaking animation, Pirates just kind of meanders. Half-developed jokes about a pirate passing as a male when she is “surprisingly curvaceous” never pay off, and quips about gout feel tepid at best.

Here’s the point where 3D comes up. The film, which is offered in extra dimensions most everywhere it is playing, is further proof that the gimmick only works in capable hands. Not to say that directors Peter Lord and Jeff Newitt are incompetent, but Marty Scorsese or Werner Herzog they ain’t. While a movie like Up leveraged the tool to provide dimension, Pirates embraces it half-heartedly, which aptly describes the film itself.

Look, Pirates isn’t bad by any means. But it is somewhat monotonous and surprisingly disengaging. There’s a reason why, despite the fact that movies appealing to children represent the safest box office bet, you haven’t heard much about this one. Aardman Animations deserves a place at the animation table, but Pirates doesn’t justify their portion size.