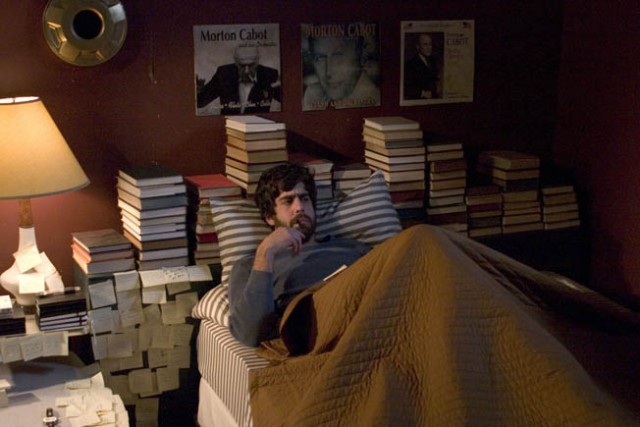 The new comedy (Untitled) has the punctuation and the thinness of a gallery wall label. It wanders the exhibition spaces, lofts and performance venues of Chelsea and other parts of Manhattan, eavesdropping on the narcissistic mutterings — funny, some of them, now and then — of a group of artists and bohemians and poseurs going up, or down, or sideways.

The script by Jonathan Parker and Catherine di Napoli, which Parker directed, is a tale of two brothers. Adrian, played by Adam Goldberg, devotes his sour life to music so forbiddingly atonal, he believes that harmony was “a capitalist plot to sell pianos.” Brother Josh, played with a bland air of superiority by Eion Bailey, is the opposite: no standards, no artistic fire in the belly, but lots of money in the bank. His paintings decorate countless hotel-lobby walls, and Madeline, his rep, played by Marley Shelton, likes to keep his stuff “in back,” where the swells visiting her gallery for its more adventurous offerings will never see it.

Both brothers have a yen for Madeline, who, in one of the film’s few successful running gags, is always wearing clothing made of vinyl or squeaky leather or excessive zipper components. She’s not a sight gag; she’s a sound gag. I wish the movie had more sly jabs up its sleeve. Too much of the time we’re stuck on repeat, as we listen to different characters pull variations on the theme of insecure narcissism. In one scene, Adrian unleashes his preferred brand of atonal angst on a restaurant audience. In another, Madeline’s hot-hot-hot installation artist, played by Vinnie Jones, explains that he’s not influenced by the past, he’s influencing the past.

A surer hand behind the camera might’ve finessed the jokes more effectively, or established a consistent and satisfying tone. Playwrights as diverse as Donald Margulies, Tina Howe and James Lapine have dissected characters such as these before, and better. (Untitled) has too much repetition, not enough variation.

The women fare best, and if it weren’t for the British actress Lucy Punch, very droll as Adrian’s game but long-suffering clarinet player, the movie would have no contrast of any kind, nothing to vary its jargon-mad game.