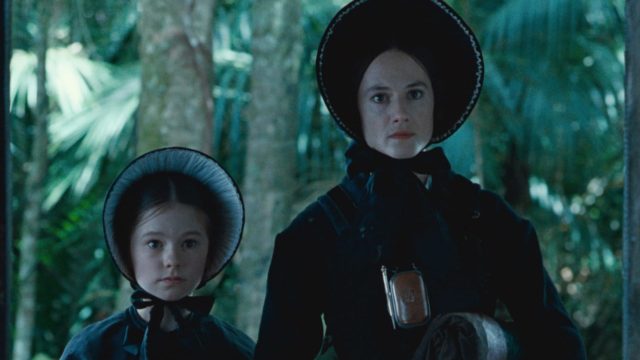 A young girl spies her mother in bed with a man who is neither her father nor the woman’s husband. The young girl is Flora (Anna Paquin), the speaking child of her mute mother, Ada (Holly Hunter). Both were bought and brought here by Alisdair Stewart (Sam Neill), a white settler in New Zealand Maori country. The mute part, Alisdair knew about that. Though he probably expected her to be more meek than mute. What he didn’t expect was that Ada would be bringing her voice, a John Broadwood & Sons piano, along with her.

Alisdair is the quiet, reserved type. Handsome, yes (it’s Sam Neill, after all), but lacking in the lust department. This is the Victorian Era we’re talking about, and I doubt many parents took their kids aside to give them “the talk.” The urges are still there. What to do about them is the problem. These settlers—including the very prim and proper Aunt Morag (Kerry Walker) and Nessie (Genevieve Lemon)—are trying to bring civilization and repression to the bush. If only they knew how nature works.

Back to Ada’s bed: The man she is lying with, the one Flora spies through a hole in the door, that’s George Baines (Harvey Keitel), a man who would not look out of place aboard the Pequod. In the parlance of the time, Baines has gone native—finding more spiritual solace in the Maori culture than his own. It’s little wonder why he’s attracted to Ada: She’s the type of woman he went looking for all those years ago and never found. And it’s a two-way street. Baines might be the first man Ada has known, carnally, that was not taken. That little Flora does not understand this is the tragedy of the movie.

Flora doesn’t do anything about seeing her mother and Baines together—at least not immediately. The next scene shows Flora and a handful of Maori kids playing among the trees. They take turns hugging each tree, giving it a little kiss and, in the case of one of the boys, a couple of healthy humps. The Maori mothers watch and laugh. Kids being kids. But when Alisdair comes upon the scene, he’s appalled. “You’re greatly shamed,” he scolds Flora. “You’ve shamed these trunks.”

To make amends, Flora scrubs the tree trunks at Alisdair’s behest, covering them in thick, white soapy suds. It’s a powerful image in a movie filled with powerful images, each one more charged than the next. So why am I so locked in on these three scenes, brief as they are? Because I think they provide the skeleton key to unlock the mystery at the heart of 1993’s The Piano, written and directed by New Zealander Jane Campion.

The Piano’s place in cinema history is secure as Campion was awarded the Palme d’Or at the Cannes Film Festival, the first for a female director. The win launched Campion onto the world stage, a role she’s held with considerable acclaim for the better part of three decades, and brought attention to New Zealand filmmaking, particularly Campion’s previous features: Sweetie (1989) and An Angel at My Table (1990).

Both Sweetie and An Angel at My Table are good—well, An Angel is incredible, but I have limited space—but how The Piano takes Campion’s interest with female sexuality and imbued it with gothic eroticism and earthy imagery is second to none. Cinematographer Stuart Dryburgh uses a process similar to Autochrome, the photographic style popular during Ada and Alisdair’s time, to give the New Zealand bush a lush, sea green hue. It looks like Ada and her stark black Western wear are drowning no matter where she goes.

The Piano is beautifully gothic. Campion adores the Brontë sisters, and to see The Piano through their lens is to understand what all that pent-up passion is all about. But what makes The Piano all Campion are the two endings: One fitting, the other hopeful. In my heart of hearts, I know the story really ends a few minutes before the credits—you’ll see what I mean. But I prefer Campion’s ending, the one that bumps right up against the final fade-out. It has the touch of an author, one who doesn’t want life to end in despair or heroic sacrifice. The kind of ending that knows life, no matter how mired in the muck it may be, is still worth living. That music and sunsets and love plaster over all of the hurt out there. Sure it’s romantic, but if that isn’t the reason to keep going, I don’t know what is.