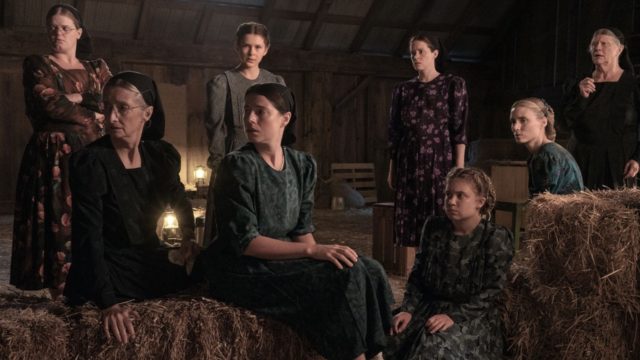 You may overlook the anachronisms at first, but a few things ought to tip you off that Women Talking, the latest from writer-director Sarah Polley, does not take place when you think it does. A slow-moving traffic sign here, a manufactured cigarette there. References to cow tranquilizers. Acknowledgments of police custody and the cost of bail. In what century do these women live? They are Mennonites on a remote compound and are kept from virtually any form of schooling or education. That is by design. So, too, are the abuses.

Women Talking is a magnificent piece of work. The movie delivers what the title promises, as these women (a stellar ensemble led by Rooney Mara, Claire Foy and Jessie Buckley) debate leaving their compound—the only home they’ve ever known—or remaining under the thumb of their abusers. This adaptation of Miriam Toews’ 2018 novel features rhetoric at its most real, based on actual accounts of systemic physical and sexual abuse on a Mennonite compound in Bolivia.

“We put frames around ideas and events,” the narrator of Women Talking says. “But sometimes the story spills over.” So it did all weekend long inside Telluride’s box canyon, deep in the San Juan Mountains of southwest Colorado. Over 50 movies screened this past Labor Day weekend at the 49th Telluride Film Festival, many of which could not be confined by the frame. BARDO (or False Chronicle of a Handful of Truths)—the latest from Alejandro G. Iñárritu—is so expansive, the movie’s messiness might be its greatest quality. There’s nothing messy about Tár, but writer-director Todd Field packs in so much that you’ll spend days pulling on threads while wondering if Cate Blanchett’s performance of Lydia Tár is her best yet. Spoiler: It is.

A line from Brian Selznick’s novel, The Invention of Hugo Cabret, sums up moviegoing with the greatest of ease: “It had been like seeing his dreams in the middle of the day.” But to whom do these dreams belong? In BARDO, you could say they are Iñárritu’s. But you could also say they are the dreams of Iñárritu’s idols. What about Women Talking? Are these Polley’s dreams or Toews’? The collective who inspired the story? How about Adam Curtis’ outstanding Russia: 1985–1999? Curtis culls through hundreds of hours of archival BBC footage to craft a four-hour documentary about the fall of communism—and democracy—in the Soviet Union. There are no talking heads, and context is kept to a minimum. We learn by watching: A bread line. A car manufacturing plant under the control of the mob. The rise of the oligarchs. Technicians searching for a missing nuclear core wearing nothing more than glorified plastic bags and masking tape. These are not the dreams of one but many. This is what history must look like to an extraterrestrial.

I can’t recommend Russia: 1985–1999 enough. Ditto for Women Talking—both made me wonder if I’m paying attention enough. Take a key moment in the latter film: The women, after having talked themselves to the point of conflict, decide to take a break. In this moment of rest and solace, The Monkees’ “Daydream Believer” shatters the quiet of the Mennonite farm and stamps a shocking date on the proceedings. We know the past was horrible for many, and we like to think we are more enlightened now. But we are never as far from the past as we would think. Whose dreams are these? They are ours.