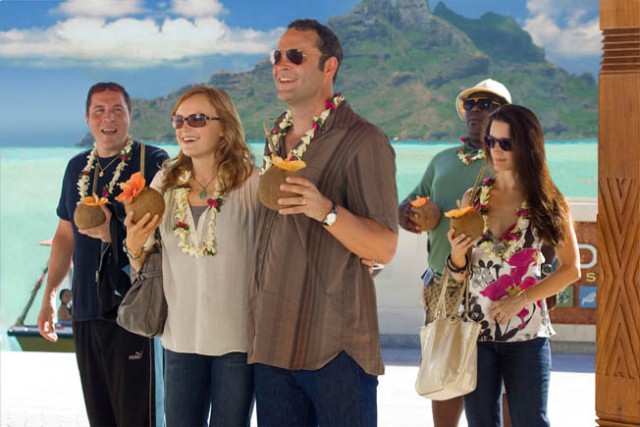 Director Peter Billingsley had a tough assignment: take four suburban couples and put them through a series of “relationship building” challenges that were thought-provoking, poignant, revealing and funny. In attempting to accomplish this, he makes everyone a crass caricature, preventing us from neither engaging with them nor caring about the outcome of their journey. Worse, it’s just not that comical.

Couples Retreat could have been a funny movie, but even the significant acting and comic skills of its stellar cast left me completely uninvolved. The fact that it blatantly stereotyped and poked fun at gays, blacks, Asians, therapists, couples who need therapists, and on and on just added to the pain of being in the audience.

The film stars Vince Vaughn as Dave, a video game salesman who is married to Ronnie (Malin Akerman). They have two young boys and while he works long hours, she obsesses over remodeling their house, dragging him to pick out $1,000 kitchen tiles and insisting he choose a finish he prefers for new towel rails.

Dave is pals with uptight dweeb Jason (Jason Bateman), overweight black guy Shane (Faizon Love) and perpetually good-guy Joey (Jon Favreau). None of these guys are believable and some pretty heavy material is awkwardly played as comic. For example, Jason is a survivor of testicular cancer, but it’s just a setup for a few jokes he makes to his friends about avoiding what they call “ball cancer.”

It was difficult for me to understand why these guys would be friends, since they don’t seem to like each other very much. They’re not supportive; they don’t have shared interests or hobbies, kids in the same schools, or even geographic proximity.

Dave is married to Ronnie; Jason is married to Cynthia (Kristen Bell). Shane is with Trudy (Kali Hawk) but still working through his recent divorce from Jennifer (Tasha Smith). Joey is married to Lucy (Kristin Davis, who, as a trivia aside, was born in Boulder).

Forty-something Shane has only known his 20-year-old girlfriend Trudy for two weeks before they leave town together.

Joey and Lucy are doing their best to appear normal in front of their high school daughter, and there’s a touching scene where he explains to the daughter why she can’t go out inappropriately dressed (e.g., halfnaked), then adds, “And you need to change your Facebook pics too. No bikini pics on the Internet. While you’re in my house, you’re Taliban.”

After she leaves, however, it becomes clear that Joey and Lucy are holding the relationship together until the daughter moves out. The problem? Kids always know, and the dichotomy between the nice parenting moment and the vitriolic argument immediately thereafter is completely unbelievable.

The most problematic relationship to me, though, was Jason and Cynthia’s. A testicular cancer survivor, Jason is clearly the stand-in for the cerebral, detached modern man. While Jason and Cynthia sell it to their friends as a fun vacation, it turns out there are hours of required relationship-building exercises, daily sessions with therapists, and other obstacles, and it’s not until the end of the film that the characters get to “ride the Jet Skis,” the film’s metaphor for having created a strong relationship. The transition from their suburban lives to arrival at the island is jarring, and the edits throughout the film had a surprisingly rough feel, making it feel a bit like a work print.

There’s not much more I can say about Couples Retreat. There were definitely some funny scenes and the exteriors (shot on location in Bora-Bora, Tahiti) were stunning, but was it a coherent film with a beginning, a middle and an end? Keep your expectations low and perhaps you’ll enjoy its 107 minutes of late-night skits. Then again, maybe a tanning salon and daiquiri would be a better use of your cash.

Dave Taylor has been watching movies for as long as he can remember and sees at least 500 films a year. You can find his longer, more detailed reviews at www.DaveOnFilm.com or follow his movie updates on Twitter as @FilmBuzz.