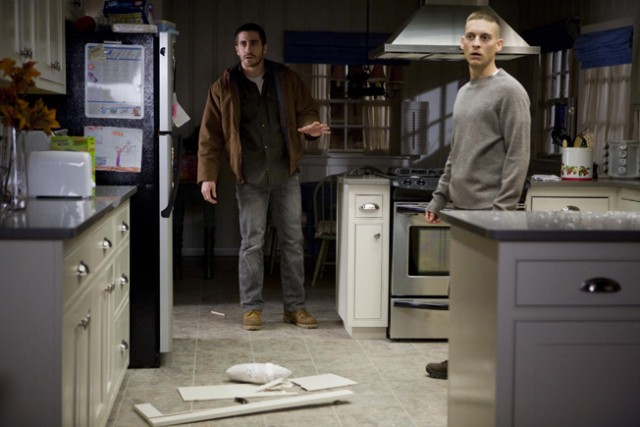 A mid all the promotional noise for Up in the Air and Avatar and the rest, it’s easy to overlook a drama like Brothers, with its plain-spoken title and stern subject matter.

Don’t. The film is gripping — an honorable and beautifully acted addition to the tradition of homefront war stories. Director Jim Sheridan has prodded his actors to dig deeply and deliver the big emotions without going for capital-A Acting, also classified as capital-O (Oliver) and capital-S (Stone). The stars playing the brothers of the film’s title, Tobey Maguire and Jake Gyllenhaal, have been variously effective and touching in much of their respective screen work, but their best stuff here is the their best stuff to date.

Along with Natalie Portman, an actress of grace, integrity and guts, they anchor a tightly packed melodrama. Sheridan, whose career peaks include My Left Foot and In the Name of the Father, orchestrates the tension and release with a sure hand. There’s just enough breathing room in this piece to make it work and to make us realize we could be any one of these people. How would we respond to the challenges they face?

The story’s outline hews closely to Susanne Bier’s 2004 Danish film, also called Brothers. It dealt with a soldier, presumed dead in Afghanistan; his ex-con brother; and the soldier’s wife, who develops an emotional bond with her brother-in-law. Working from a script by David Benioff, Sheridan’s remake (shot in New Mexico) is a model of compression. It takes place in 2007. Capt. Sam Cahill (Maguire) is about to return to Afghanistan for his fourth tour of duty, leaving once again his wife (Portman) and daughters (Bailee Madison and Taylor Geare) to cope on their own. Sam’s drifter brother, Tommy (Gyllenhaal), is sprung from prison just before Sam leaves. The family reunion is wary. Sam Shepard, at his intuitive and subtle finest, plays their taciturn father, a retired Marine himself. Typical of the small moments in Brothers that make it special: In the cramped kitchen, when Tommy sees his father for the first time in a long while, the muttered words between them speak volumes, quietly.

Sam Cahill’s survival is never in doubt for the audience (no spoilers here), and having endured Talibaninflicted torture and bearing a heavy load of guilt, he returns home a distant, volatile relation to his former self. I wonder how far audiences today are willing to go in supporting a film the story of which hinges on posttraumatic stress disorder. In the exceptional picture The Hurt Locker, the explosives expert played by Jeremy Renner copes with a world of pain, but not enough to interfere with the audience’s perception of him as a firstclass warrior and a hero. Brothers is different. It’s more conventional and familiar, but, without cheapening the military figures, Sheridan and company venture further into Cahill’s despair — arrestingly so — than you expect.

In the early scenes the easygoing, soft-centered Maguire doesn’t quite seem like any sort of military type. Also, his bug-eyed crazy look later on may be a touch too theatrical. Then again: Wars use (and use up) all kinds of enlisted men. The film moves swiftly to its conclusion, and that conclusion rightly demands audiences to imagine the next chapter in an ongoing story for themselves.