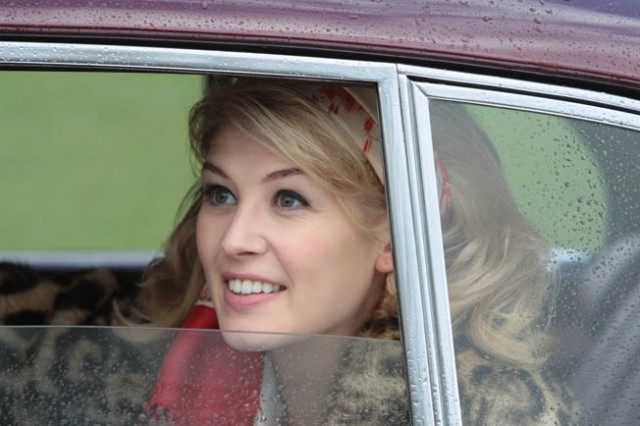 “Why was I, a conventional Twickenham schoolgirl, running round London nightclubs with a con man?” British journalist Lynn Barber asks herself this question in her memoir, published earlier this year. The question has now led to a movie, which answers Barber’s query in its own genial, highly enjoyable way.

By temperament, adapter Nick Hornby, the popular novelist and screenwriter (High Fidelity, About a Boy), prefers to risk only so much audience discomfort. His screenplay for An Education sands a few edges off the corners of its heroine’s story, in the service of keeping some of the later narrative developments palatable. Yet the film is awfully charming. It bops along with so much esprit and lively, responsive acting, and such an observant sense of the period, you’re seduced by the results in the same way charming, slightly oily David, played by Peter Sarsgaard, entices young Jenny into his glamorous orbit of night life, day-tripping and illusions.

Sarsgaard, sporting a workmanlike posh dialect, receives top billing, but the film belongs to Carey Mulligan as Jenny. Now 24, the actress with the thrummy alto delivery already has done a good deal of film and theatrical work. An Education showcases her comic range and natural authority. She is excellent.

Jenny is a prototypical good girl, bright, avid-eyed, living with her buttoned-down parents (played by Alfred Molina and Cara Seymour) in the “beige” Twickenham area of southwest London. The time is 1961, just as the culture was being pulled forward and apart. The girl has a moony-eyed teenage suitor named Graham, but just as she’s knuckling down for her Oxford entrance exams, Jenny meets a good-looking fellow a decade and a half her senior, with a maroon sports car and the promise of something new, dangerous and dazzling.

David and his chums, played by Dominic Cooper and Rosamund Pike, offer Jenny a metaphorical room with a view, ushering her into a world of culture, good food, the dog track, the high life. How does David make his money? Something to do with property. An Education keeps key information hidden until it’s good and ready to spill. Well in advance, the Sarsgaard character’s

Jewishness is a red flag for certain influential and repressive parties in Jenny’s universe, especially the school headmistress, played by Emma Thompson. Olivia Williams provides the antidote, as Jenny’s badly needed mentor, Miss Stubbs. We are the people we know, and An Education illustrates the value as well as the cost of exploring the human condition fully.

The film version of Breakfast at Tiffany’s came out in the year in which An Education is set, and beyond the hairstyles, there’s something of the willful, gleeful Golightly reinvention expert about Jenny. Still, she’s no poseur, at least not in Mulligan’s deft portrayal. As the character’s sexual initiation (discreetly handled) gives way to a new chapter, director Lone Scherfig plays the developments for as much truth and sensitivity as the material — somewhat facile in the home stretch — allows. Danish-born Scherfig has said she wanted to make the ’60s coming-of-age picture she never got to see growing up. Mulligan seizes the day. Parts like these do not come around very often. She has a touch of Wendy Hiller’s intelligence around the eyes, and a dash of Audrey Hepburn mischief in her smile.

She’s here to stay, and while An Education might have worked perfectly well with a different young actress, happily we’ll never know.