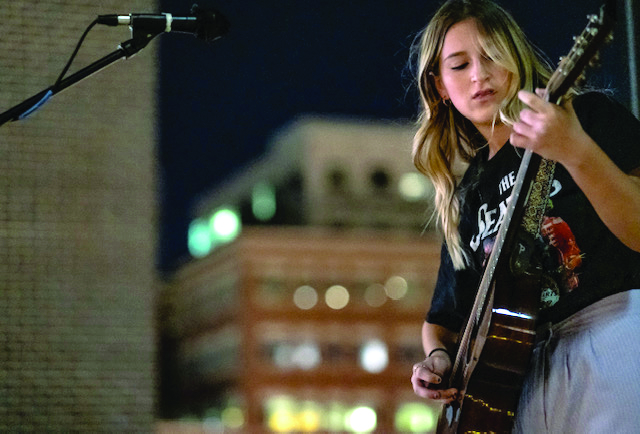 When Emelise Munoz was young—younger than she is now—passersby would hear her busking down the street, drawn by her deep, soulful voice, surprised to find a child behind the sound.

But while she enjoys singing, guitar is her real passion.

“I don’t remember ever not playing the guitar,” says the singer/songwriter, who mononymously performs under her first name. “I was just so little.”

The now 16-year-old is set to record her first full-length album over spring break, with more than a decade of live performance experience behind her. Her melodies are full of a raw emotion that belie her age. Her skillful guitar strumming and picking create rich acoustic soundscapes. And she comes alive in front of an audience, her engaging charisma creating fans everywhere she goes.

Born in Florida, Emelise first wanted to play guitar at the age of 4. After her grandmother (her “biggest fan”) bought her a guitar for her birthday, she began lessons at age 5. Out of convenience, her mom found her first teacher at a music shop across the street from work, which is where everyone learned Emelise could play music by ear—listening to a song and quickly matching its note and melody. Soon, Emelise began learning a new song each week, easily replicating tracks she heard. To this day, she struggles with music theory.

“I can tell you what note it is on the guitar, but just putting it to little circles on lines—it’s hard for me,” she says. “I don’t really think of the names of the notes as much as how they make me feel. My ear is everything for me in music. My ear is my best friend.”

By the age of 6, her guitar teacher began bringing her to local gigs, inviting her to play during his breaks. She fell in love with performing live, got her busker’s permit in Fort Myers, Florida, when she was 7, and has been playing for audiences any chance she gets ever since.

“Whenever I don’t have a show, I always go and busk to make my own show,” Emelise says. “It’s my practice. I love practicing in front of people.”

Her family moved to the Denver area when Emelise was 9, bringing her busking career with her. Emelise attributes her love of music to her parents.

“I remember when I was little, I’d just ride in the Jeep with the windows down and my dad would be blasting all this great music,” she says—Elton John, Dave Matthews Band, Brandi Carlisle, the Lumineers, Nathaniel Rateliff. She’s either met and/or seen most of her heroes live, and many have also heard her play. (In July 2021, while playing at Denver’s Ace Eat and Serve, Lumineers lead singer Wesley Schultz walked by with his family right as she was singing “Dead Sea.” He posted his approval on social media.) She sees almost as many live shows as she plays—sometimes even skipping school to do what her educator parents call “professional development.”

For guitar specifically, Emelise is inspired by Tim Reynolds (who plays for Dave Matthews) and Tim Hanseroff (who plays with Brandy Carlisle). But more recently, she’s discovered more obscure musicians like Emily Remler, an American jazz guitarist who also began playing at a young age but passed away in her early 30s in 1990. Emelise has taken lessons in Flamenco, classical and jazz guitar over the years,  melding these into her own style of playing, as well as voice lessons.

She now owns about 10 guitars, but prefers her Rockbridge, given to her by the company founded by a friend of Dave Matthews. She plays hard, often breaking strings in the middle of a set. It happens so often that both of her parents now know how to change the strings in under two minutes, something they learned after multiple trips to a local Guitar Center for the same service.

Emelise is tenacious in her pursuit of live performance, sometimes emailing up to 50 local venues at a time hoping it leads to booking at least a handful of shows. Without a booking agent, she manages this all herself, often scheduling a handful of gigs each week in addition to busking. She’s played at the Bluebird Cafe in Nashville and the Apollo Theater in Harlem. She’s played  Vail and other resorts on the weekends after skiing, and had a residency at Beaver Creek last summer, often performing after a day of mountain biking. She played the Denver Bernie Sanders rally in 2019, the Women’s March and March for our Lives in 2018. She’s performed as part of the The Boulder International Film Festival and Arise Festival, as well as Trident Booksellers, the local Sofar circuit, and she most recently opened for John Craigie at eTown Hall.

Through it all, she’s unphased by the size of the audience, unaccustomed to the nerves most people experience in front of crowds. Her mantra is: “The more people I can play in front of the better.” When she sang the national anthem at the Major League Baseball (MLB) all-star game in Denver in July 2021, one of the heads of MLB came out and told her she was going to perform in front of millions of people. “The more the merrier,” she responded. She went on to do the same at the Little League Classic a few months later, her first televised performance.

She has yet to go out on tour, though; COVID-19 and its variants have kept her at local venues the last several years.

After a friend of a friend heard her busking outside Coors Field at age 10, she was introduced to Brad Corrigan of Dispatch and was scheduled to play with the band at Red Rocks in July 2020. Then she was supposed to join the band on a national acoustic tour in 2021, but both were canceled to accommodate public health. The pandemic has been especially difficult for someone who loves performing live as much as Emelise.

“I try not to look on the downside,” she says. “I just write a song about it.”

In fact, regardless of what may be going on in her life, Emelise spends most of her free time either writing or playing music. When she gets home from high school, the first thing she often does is pick up a pen and paper to write, sharing new compositions with her family each week. At teenage sleepovers, her friends all stay up into the early morning composing and singing. She’s written songs for class projects and about her family’s struggles as small-town farmers in Iowa and about her dreams, jotting down sleepy memories in the middle of the night. She has written so much that she actually doesn’t know how many songs she has, some still in fragments waiting to be finished. And she plans to write even more in the coming weeks, preparing tracks for the forthcoming album, the first of her music to be released on streaming services. Whatever doesn’t make the cut, however, Emelise promises to keep in her sets, both on the street and on the stage.

“My originals are my favorite to play because it’s my words that I’m sharing with other people,” she says. “And I think that’s really special. I just love hearing or seeing people connect with what I’m thinking and what my emotions are.”