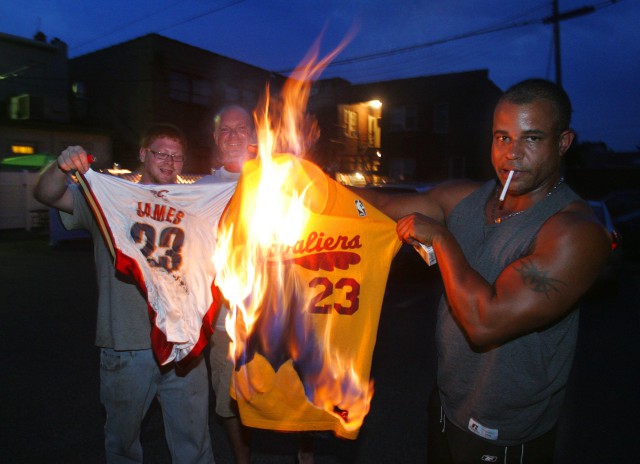 There was a lot to like: The immediacy. The breadth and depth of information. Several stories were dead on, including reporting on ESPN that would join the Heat and likely would, too.

But there was some misinformation that further
erodes the public’s trust. And throughout June, ESPN’s coverage of
James was over-the-top, dominated by speculation and guesswork in the
absence of hard news.

If ESPN had not agreed to James’ demands to sell ad
inventory during his 60-minute special Thursday — with the money going
to the — some other network assuredly would have. So don’t blame ESPN for accepting James’ terms.

But you can blame ESPN for dragging out Thursday’s announcement. James didn’t disclose he would play for the Heat until , after ESPN assured Wednesday that he would reveal the team

And shame on and ESPN for asking 16 questions — 16! — before asking James the only one on anybody’s mind: Which team will you play for?

The answers to those questions would have been more
substantive, more meaningful, if he had revealed the winning team
first. Remember, ESPN executive said
the network had editorial control over the show except for the presence
of Gray, who was there because Maverick Carter, James’ business
partner, wanted him there.

And was there really a need for a three-hour,
James-heavy SportsCenter before the announcement? ESPN gave James his
own entry on ESPN’s crawl the past week, even when news didn’t warrant
it.

“It takes 15 seconds to say, ‘I’ve decided to stay in ,’ Magic coach told reporters Wednesday. “But we’ve got 59 minutes and 45 seconds to what? Promote ? As if we don’t do that enough… . You don’t hear and talking about their brand.”

offered dead-on perspective on the circus:
“It’s gotten ridiculous. It’s almost like a parody of itself. If Wade
just comes right out and says, ‘I’m going back to ,’
you can’t get a film crew to follow him around to do that. Bosh had to
make it look like he considered all these teams so there would be some
suspense and interest.”

One viewer’s media scorecard of how free agency shook out:

—Biggest winners: 1) .
Yes, he’s loud. Yes, he scowls as if a kid had egged his house. But
give the man credit. He nailed two weeks ago that James, Bosh and would play for the Heat. 2) ESPN’s Broussard; he was the first to report Bosh would join Wade in and reported all day Thursday that the Heat was the front-runner for James. 3) New York Newsday’s , who joined Broussard early Thursday in saying James would join the Heat and had the scoop on the site for the announcement ().

—Biggest loser: , which played up its story two weeks ago in which a league source said James-to- was a done deal.

—Most ridiculous report: Fanhouse saying last month that James would go on a recruiting tour, with unveiling a new sneaker at each stop.

—Oops: ESPN’s Broussard and insisting 10 days ago that Wade, Bosh and James met in during a weekend when Wade was in
the entire time. They stood by that report until Thursday, when
Broussard admitted it was untrue, and that the three players actually
met in .

—A bit too far: ESPN’s saying last Friday that Wade was leaning toward signing with the Bulls.
Wade strongly considered it, but said this week he always planned to
re-sign with if Bosh or James joined him.

—Naive report: ESPN, quoting a source, said the
Nets’ meeting with James was “front-runner tremendous.” ESPN shouldn’t
have fallen into that trap — every team said its meeting went
splendidly. (And, by the way, have you ever heard a team announce that
a player underwent unsuccessful surgery?)

—Huh? Broussard reported the Knicks were the favorite to land ; colleague said the Hawks were. Bucher was right.

—Most overexposed: Broussard and , who were forced to appear on ESPN networks at all hours even if they had nothing new to say.

—Most entertaining candor: From , who said he wasn’t surprised Bosh joined Wade in because he had been following Wade “around for two weeks like a lap dog.”

—Most amusing report:
reporting James, hours before the start of free agency, pulled out of
his mansion in a Black S.U.V. and honked his horn at three fans holding
signs begging him to stay. “That beep meant everything!” said Cavs fan
Justin Sugermen. Or not.

—Unfortunate timing: WQAM’s not only was on vacation this week — missing all the Heat hoopla — but spent the time filling in on a radio station.

—The world is round, ESPN’s is reporting: ESPN crediting Stein for reporting that the salary cap
would be higher than projections — three hours after the NBA sent an
e-mail announcing that.

—Most obsessive Twitter use: Bosh, who felt compelled to announce he was eating a Belgian waffle on Wednesday.

Visit Web edition on the World Wide Web at http://www.herald.com/