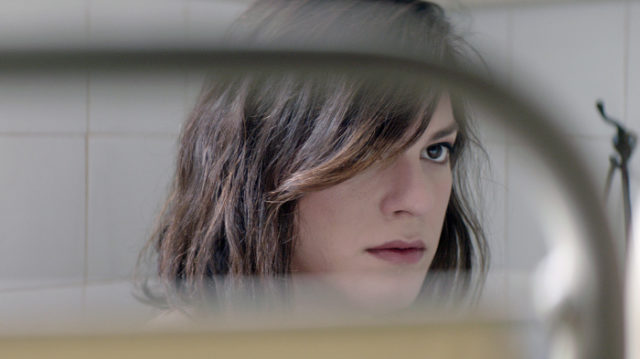 Marina Vidal (Daniela Vega, Chile’s first openly transgender actress and model) is a waitress with designs of being a singer. And with a voice like hers, she will be. But as the old story goes, nothing ever comes easy.

Someday Marina will bring down the house at the opera, but for now, nightclubs will have to do. That’s probably where she met Orlando (Francisco Reyes Morandé), a handsome businessman with salt and pepper hair and a few decades on her. But that matters little to either. Theirs is a relationship of love and excitement. You can see the spark when their eyes meet, the sensuality when they kiss and the tenderness in their touch. Simply put, they are in love.

Then, he dies. Suffering an aneurysm in the early hours of the morning, Orlando loses his balance and tumbles down a flight of stairs, expiring shortly after being admitted to the hospital. Now Marina’s true struggle begins. First, when the nurse hesitantly hands over Orlando’s personal effects to her, then when the doctor suspiciously questions Marina about what the two were doing prior to the fall. Sleeping, she tells him. Then a police investigator gets involved, curious about those bruises on Orlando’s body. Were they really from his tumble down the stairs? On and on, Marina defends herself from questions, suspicions and accusations that go well beyond her romantic relationship. “Did you have the operation yet?” Orlando’s son asks, and not out of curiosity.

Directed by Sebastián Lelio, A Fantastic Woman lets us experience this firsthand. We see how the world sees Marina through her own eyes. And what do they see when they see Marina? Abnormality? Perversion? Disgust? “A Chimera,” Orlando’s ex-wife says.

That reference to a Chimera, a hybrid from Greek mythology, points us in the direction of another myth, this one of the soothsayer Tiresias, for insight into Marina’s adventure. As the story goes, Tiresias was walking along a path when he came upon two snakes copulating. He stuck his staff between them and was suddenly transformed into a woman. Tiresias then spent the next seven years as a woman until she came upon two snakes copulating in the road, stuck her staff between them and was transformed into a man.

Years later, Zeus and Hera were having a spat about who enjoyed sex more, the man or the woman — Zeus claimed woman derived more enjoyment and Hera was having none of it. Deadlocked, they decided to ask Tiresias, considering he had experienced it from both sides of the equation. Tiresias concurred with Zeus, saying men only enjoy one-tenth of the pleasure and Hera, furious she lost the argument, cursed Tiresias blind. Taking pity, Zeus granted Tiresias the wisdom of prophecy.

How does this relate to the Oscar-nominated film from Chile? That you will have to discover for yourself, and what a discovery it is. As Marina moves between the pairs of opposites, we glimpse the inner workings of her mind and of her fantasy. Her eyes are wide open, as are ours, and there is no doubt: Marina is one fantastic woman.