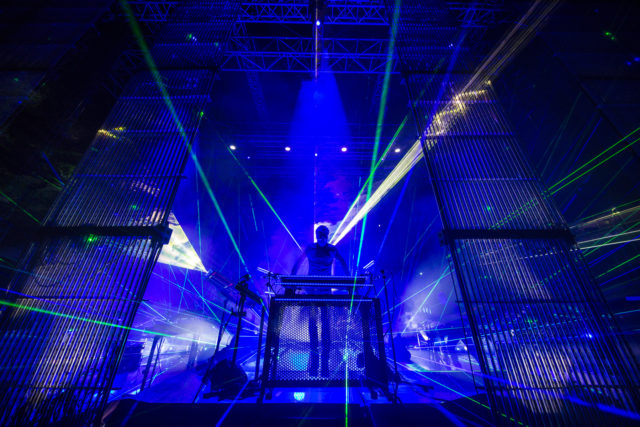 A mere four days before chatting over transatlantic phone lines with Jean-Michel Jarre, the French electronics master played a show at the iconic site known as Masada, in Israel. The ancient fortification, atop a steep mesa overlooking the Dead Sea and once the site of Herod’s palace, is a popular tourist attraction; for Israelis, Masada is an iconic historical landmark, the place where nearly a thousand Jews committed suicide rather than surrender to Roman siege forces in 74 A.D.

“Not my first trip to Israel,” Jarre explains in heavily accented English, “but my first free concert there. It went very, very well, except we had a very strong windstorm three hours before the concert.

“It was really to provide a showcase to the Dead Sea problem, where the sea is diminishing every year. I was really touched by the people of the region when I went there a year and a half ago, and when I went back, I discussed with the UNESCO people about what I could do, and we came up with the idea of doing a concert to improve the awareness of the problem. This is a problem that can only be solved through awareness and action by the international community.”

Arguably the most successful solo electronic musician on the planet, Jarre is accustomed to both milestone-stamping free concerts and defying troublesome weather.

Depending on your point of view, the roots of the genre extend back to the 1950s and guys in lab coats, or to the 1960s with angular German compositional theorists like Karlheinz Stockhausen and Wendy Carlos’ Bach interpretations on the Moog. Or to the early 1970s with the flourishing of the so-called “Berlin School,” mainly the German trio Tangerine Dream and Klaus Schulze, as well as the explorations of Bob Margouleff and Malcom Cecil, who brought their trippy Moog blips and beeps into the pop mainstream through their collaboration with (of all people) Stevie Wonder.

But it was Jarre — with his first major release, Oxygène in 1977 — who promoted the genre past theory and reefer-scented planetariums, and into mass accessibility. Recorded in a cramped home studio, Oxygène reached  No. 2 on the UK charts in 1977, No. 1 on the French charts and blasted Jarre into international recognition. Its signature single, the gently loping and dreamily melodic “Oxygène Part IV,” remains an enduring radio staple.

As a live performer, Jarre’s concerts over the years are mass-attendance legends. He holds the record for the largest outdoor concert attendance (3.5 million in Moscow, in 1997), as well as multi-million shows in Paris in 1990 and 1995, and they are known for grid-stressing light shows, as well as his use of the laser-harp, a laser light-enabled synthesizer.

Jarre isn’t the first EM artist to employ visuals into his music (Tangerine Dream toured with the Laserium guys in the mid ’70s), but he is the first to use it in sprawling outdoor settings. His attraction to the visual was both practical (who wants to watch a guy by himself turning knobs?) and aesthetic. Trained as a painter in his youth, Jarre, who has done extensive consultation work on performance synthesizer design over the years, says he has always been sensitive to the visual.

“I remember when I first started, I went to see the Rolling Stones,” Jarre says. “They were just playing their rock band music. Now when you see all the massive production and all the visuals, and the fact that you can listen to music everywhere, if you go to a concert and buy a ticket to see a concert, somehow you have a visual expectation.

“I just regard it as using the technology of our times.”

What started five years ago as a wouldn’t-it-be-cool project for the synthesist became a logistical and artistic enterprise of epic, continent-hopping proportion. Even Jarre himself was stunned at the positive reaction he got from virtually every artist he approached.

“When you’re doing electronic music, you’re always working in your home studio, as a composer, by yourself,” he explains. “So I made this rule: We wouldn’t do this by making and sending files back and forth, we would get together and talk about composition, talk about the abstract together. And I was very moved and touched that so many people opened their studio, their private gardens, up to me to work together. And to see their work habits, and where they work, and explore their strengths and weakness, and to share these moments. So many great artists … one of the most extraordinary musical experiences of my life.”