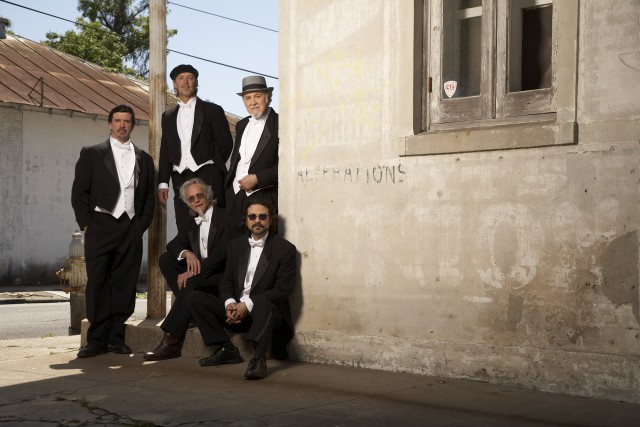 Summoning imagery from real American mythology, especially the mythology of the Old West, is the kind of legerdemain usually out of reach for most popular music franchises. And it should probably stay that way.

Still, put it in the hands of someone like the subdudes and let it fly with the kind of ragged elegance that has kept the band such a compelling enigma for two decades, and maybe the dog’ll hunt.

The band’s new album Flower Petals isn’t even really a new album. Originally conceived and demoed out as a follow-up to 2004’s Miracle Mule, the project was reluctantly shelved in favor of somewhat more commercial fare by the band’s label, we hear.

“It’s a project that the band really needed to do,” says bassist Tim Cook.

“We had written a song called ‘Flower Petals,’ which had a possibility of making it onto the first album after our break-up, Miracle Mule. And it didn’t make it, but the song was cool. We were playing it live — it kind of told a story within a story, and we just decided to expand on it with a bunch of other songs, create all these other characters… It’s kind of a rock-folk opera, told in subdudes’ style.

“It’s completely different from anything we’ve ever done. We were going to try to do it a couple of albums ago, but the record label at the time kinda nixed the idea,” Cook said.

These things happen, but the ’dudes’ last full tour, performed largely acoustic, reignited their interest in the project and fired their determination to get the thing finished and released.

Flower Petals is something of a song cycle, a life’s recollection by an unnamed protagonist from the late 19th century, touching on love claimed and lost, betrayal and redemption, death and honor, the kinds of things that stand in stark relief in a life examined. Weighty subject matter, but the songwriting here circumscribes the narrative with vignette and understatement, relying on abbreviated language and a little allegory to coax the details, rather than subtitle them. In that respect, the CD doesn’t bear the crutch of forced literalism that usually sinks concept albums; what it delivers in the way of storyline — the Civil War-enlistment testimony of “The Flower and the Fire,” the Western-justice pastiche of “Sho’ Looks Guilty” — allows the songs to live and breathe and take flight on their own.

The bouncing, grassy “Redemption Song” and grinding blues workout of “Nightshade” break the Cajun acoustic ballad vibe just enough to round out the proceedings — either would sound just fine in a live set, removed from their context here.

But the music had sat on a shelf for a spell. We wondered, after some time had gone by, whether the concept and the music supporting it still spoke to them.

“I dunno. For me, it was fun to record the songs because it felt fresh. We were doing some creating while we were there in the studio, trying to keep a simplified approach.

“You know, we were brought up with albums that were not just concept records, but records that had a theme. But that’s good… some people try too hard to get the story, you know?” So in that respect, the subdudes are exactly what they always were: a song collective, bred from the disparate motherlands of Colorado and Bayou country, by a band that’s managed to keep its pedigree relatively untarnished and its lithe musical instincts fresh and feral.

It’s been said of the subdudes that they were years ahead of the alt-Americana movement, to their credit and perhaps to their unfortunate bad luck, and that’s probably true. Some of us think they have more in common with early ’70s Robbie Robertson than late ’90s Wilco, and Flower Petals only underscores the notion that the band reaches pretty far back and pretty far down for their Cajun revival moxy, not necessarily a trademark virtue from an outfit surfing a genre buzz.

“You know, I think, myself, I think the subdudes, had we been around even in the mid or late ’60s, a lot of the songs that we had, I think we would have had some hits. I think the time we came around, late ’80s or early ’90s, pop radio just wasn’t the same.”

Indeed, there’s something a little old-fashioned about what you hear when the subdudes circle the mic, but being a little unstuck in time is what makes this band so consistently, elusively appealing, with every Boulder Theater gig a date with a slightly volatile mistress.

“Heh, I hear that. Although I’d try to downplay that with my wife,” Cook said. “But, yeah… Colorado is really were we got our start, and the folks in Boulder have always gotten it.”