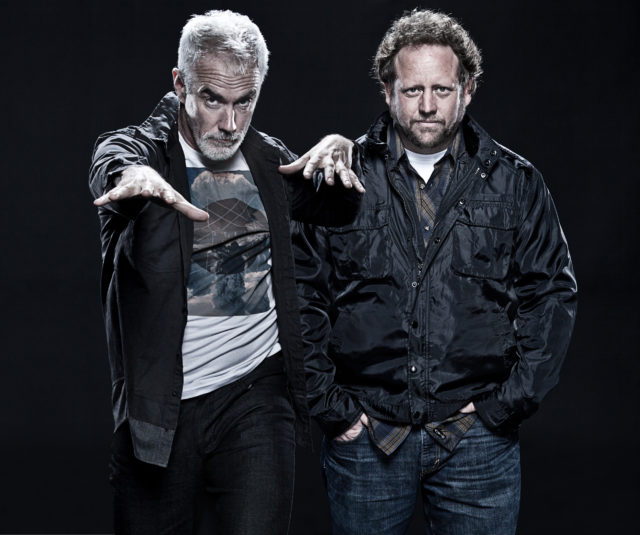 Shifting gears” is one of those colloquialisms that, once hatched as an automotive term, has slithered its way into the irretrievably tainted waters of everyday speech. But it also aptly applies to musicians like Jason Hann, who glides effortlessly — enthusiastically — from the world of string-jam to world fusion to unbounded duo electronica, as well as on-demand guest appearances when the calls come and the schedule permits.

Any working drummer will tell you that it’s better to have work than not have it. And bringing EOTO back to its Colorado roots for a three-day run through Boulder, Denver and Aspen is a nice cap to a year of a few EOTO festival gigs, some String Cheese activity (including a three-night stand in Broomfield leading up to and including this New Year’s Eve) and a few scattered dates with his other-other side project Rhythmatronix, with Oteil Burbridge.

Hann and his EOTO partner Michael Travis, of course, are both members of String Cheese Incident (SCI), and the inevitable question asks itself: Is slipping between the highly evolved string jam band gestalt of SCI and the rigorously unpredictable ethic driving EOTO ever a challenge?

“We get that question a lot. I think if you’ve played music for a while and you have lots of different interests, the way me and Travis do, going back and forth, you just sort of gear yourself up for a different frame of mind,” Hann says.

“String Cheese is all six of us collaborating and jumping in. To this day, neither me nor Travis have ever been the guys who said, ‘Let’s try an electronic piece.’ Y’know, try to force the electronic vibe.”

EOTO was quietly, and for some diehard SCI fans almost scandalously, birthed as a why-not kind of side project for Hann and Travis at the 2006 Sonic Bloom festival. SCI was already deeply cherished institution by then, and the duo’s foray into electronica, a movement just starting to burble past its club and fringe festival adolescence, raised a few eyebrows.

But while EOTO’s relationship with the String Cheese fan base continues to evolve and embrace (or ignore) its genre-defying paradoxes, it may be the duo’s relationship with the electronica fan base that is most compelling. The pair’s enduring ethic of improvising virtually every show, literally going on stage without a plan at all, places them in a slightly precarious and sparsely populated corner of the digital circuitry playing field.

Hann, of course, makes no apology for the band’s rigorous spontaneity, but concedes that much of the scene has outgrown its expectations and has become a lot of different things.

“I thought when Skrillex first started taking over the universe that there’d be a couple of years of that, and then [it’d] gradually disappear. But then dubstep latched on to being like rave music, really, and eventually all the big festivals you’ll see dubstep DJs headlining as much as any of the other techno stalwarts,” he says.

“And with that popularity always comes a sort of commercially driven aspect of it, which loses all the characteristics that made it such great underground music. It got to be just a competition of who sounded most like a drill… I mean, there was all this amazing and great production and sound design where it kind of went the way of drum ‘n’ bass, where it became who had the gnarlier sound, and then it caught on with people doing all these singer remixes with pop stars, it got more popular.”

And thus, a little less spontaneous.

“I’d completely agree,” Hann says. “If you were going to go that direction, you weren’t going to see a lot of variety, because people expected to hear this one thing. Again, it’s sort of like it crossed this area of being a cool, underground to something that is, for lack of a better word, more commercial. But I think that’s the evolution of any popular music. It happened to rock ‘n’ roll. Everything goes through that.”

So as the scene started to hoist its biggest and most heavily produced acts into the mega-fest thin air, EOTO actually further retreated into their own improv ethic, tempering some of their growing projection and audiovisual glitter, and stiffening their resolve to keep the approach purely and uncompromisingly a product of the moment and the congregation.

“There was a while, when we just wanted to be so good at what we do, that people couldn’t tell whether it was a DJ dropping tracks or we were dropping pre-recorded music. And after a while, after we got all our projection and we had a big production going, where people couldn’t see what we were doing, we found out that like 80 percent of our audience really didn’t know what we were doing,” he says.

“So, probably over the last three years, Travis has been saying before every show that, no, we’re actually making everything up, playing all the music in front of you, and the thing that makes it go is that we’re totally keying off the audience’s vibe, and everything is in the moment.”

For his part, Hann is grateful to have limited non-playing time, but he does have a couple of hobbies on the side — politics (and yeah, he had some thoughts about the election, something about a wall and cranial impacts), and the other a bit more physical.

“So, yeah, when I’m not hitting something, I’m actually hitting something. For the last four years, I’ve been doing a lot of boxing. I love it, it’s a whole other thing, but it definitely taps into a lot of the same skills as drumming, as far as timing and pacing,” he says.

“I nerd out really strong on it.”