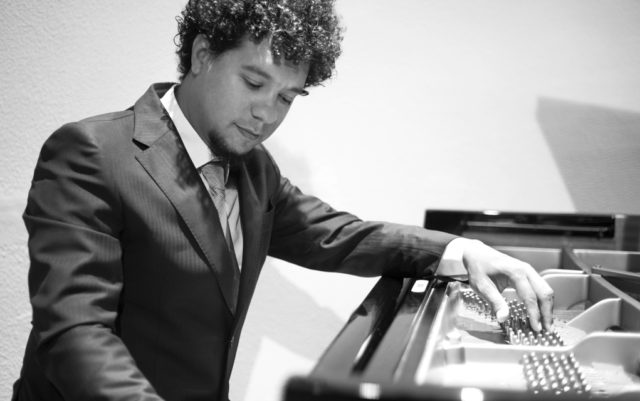 Michael Butterman, conductor of the Boulder Philharmonic, was sitting in his driveway, thinking “What on earth is going on?”

“It was just an amazing mix,” he says of the music he was hearing on American Public Media’s radio program Performance Today. “I was trying to guess what it was. Whatever it was, it was exciting and intriguing.”

It turned out to be Emporium for piano and orchestra by Cuban pianist/composer Aldo López-Gavilán, and Butterman decided he wanted to perform the piece with the composer on the Boulder Phil’s season.

The title gave Butterman the key to the wildly eclectic style of the piece. “When they said that the title was Emporium,” he says, “I thought, OK, it’s a cornucopia. It has influences from every possible genre and place that I could imagine.”

The title also suggested to Butterman that one could play almost anything with it, but he settled on music that had a stylistic relationship to López-Gavilán’s Latin American roots: Tangazo by Astor Piazzolla, the Variaciones Concertantes by Alberto Ginastera and Ravel’s Boléro.

Reflecting the eclecticism of his score, López-Gavilán performs many different kinds of music. He appears as a guest artist with orchestras, including performances of Gershwin’s Rhapsody in Blue with the Colorado Springs Philharmonic last April, and plays jazz both as a solo pianist and with the Harlem Quartet, whose first violinist is his brother Ilmar Gavilán.

Butterman’s description of Emporium is intriguing and mind-bending. “It sounded like a little bit of Philip Glass, and there were moments that sounded like the Downton Abbey soundtrack,” he says. “In the last movement I thought this is almost like ‘Bohemian Rhapsody’ by Queen, or Prokofiev. It was like all of those different things.

“He’s hard to categorize. I love that about him.”

López-Gavilán confirms the significance of the title. In his program notes, he writes, “I named it Emporium because I wanted to describe a place where you could find many different things from all over the planet.”

The first movement is based on a tune the composer wrote as a birthday present for his twin daughters. The second includes post-revolutionary Cuban songs and American country music songs, combined to symbolize peace. The finale is highly rhythmic and polytonal, bringing together music from all three movements and ending in a grand final statement of the main theme.

Butterman suggests that Emporium is not an easy piece to play, at one point describing it as “bamboozling” in the way it mixes meters and rhythms. “It looks incredibly challenging,” he says. “The outer movements [are] very rapid [with] a lot of figuration, a lot of mixed meter, where the meter feels one way and syncopated against it is something quite different.

“That makes it challenging for us on stage, but it’s always exciting to have a composer involved in the performance of a work like this.”

Of the other works on the program, Ravel’s Boléro is certainly the best known. The score’s long, slow buildup over a single repeating melody is notoriously hypnotic. “It’s all about pacing and concentration, and maintaining intensity,” Butterman says.

Tangazo by the Argentinian tango master Piazzolla is a piece that Butterman has done many times, including his first year in Boulder. “It’s one of the few things I’ve repeated in my time here as music director,” he says. “I love it. It takes us through a wide range of tempos and unusual sounds for a symphony orchestra: ‘whip’ effects, quick glissandos up, tapping on the instrument.”

Tangazo will be accompanied by a pair of dancers, Gustavo Naveira and Giselle Anne of the Boulder Tango Studio, performing in front of the orchestra. “I don’t know what they will do,” Butterman says, “but I’m always interested in hybrid art forms and bringing different elements into concerts.”

Ginastera’s Variaciones Concertantes is a notoriously difficult piece, with separate variations for individual players in the orchestra that are often featured on advanced auditions. “It’s one of those pieces that gives all the principal players a chance to do something rather impressive,” Butterman says.

“The variations are all over the place in their tempos and style, everything from very subdued and lyrical in the horn, kind of rhythmic and accented in the trombone and trumpet, and flying all over the place virtuosic in the clarinet and flute. And perpetual motion for the concertmaster.

“It’s a piece that there’s a lot of variety packed into a short time,” he says. “To me it’s a very appealing piece, but one that is extremely demanding for the orchestra.”