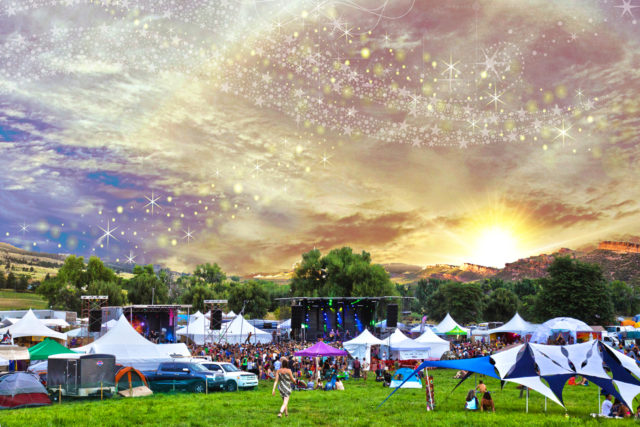 Strolling down the main vendor concourse on Saturday, the middle day, of ARISE last year, we happened upon a guy who, like us, was sporting a pretty nice Nikon DLSR. A retiree from New Mexico, mid-sixties or so, he hadn’t really come for the music, little of which he had much first-hand familiarity with, but just for the “experience” and to escape a brutal “heat dome” that was roasting Albuquerque at the time. He saw our own cameras and came up to ask for a little technical advice; the three of us spent 10 minutes comparing and twiddling knobs on our cameras — all different models — trying to thwart a quarrelsome setting on his, until amiably agreeing to a joint surrender.

And it was fine. We passed him four or five more times during the course of the afternoon, smiling and waving each time. Our new buddy. We never got his name.

It’s probably de rigueur that festivals be defined by culture critics by their “vibe,” but ARISE, at least for us, seems to slip the noose of easy labeling. Equal parts none-too-subtle conscious-living advocacy, fairground family fun, low-impact concert event, Earth-trinket marketplace and Gaia-child cosplay, ARISE coaxes and seduces its patrons to derive their own experience. It doesn’t hurt that the site — about 100 acres of the Sunrise Ranch — is in an Eden-esque valley west of Loveland, with forested foothills and sandstone cliffs silently surveying the proceedings.

Rolling Stone calls ARISE “politically charged,” and, sure, if you’re lining up non-profit booths that focus on conscious and sustainable living, community-based advocacy, environmental causes, etc., and the notable absence of groups like Coloradans for Responsible Energy Development or the National Rifle Association, someone somewhere is going to call you “political.” Paul Bassis told us last year that he envisioned the festival being the locus of an “ARISE movement,” a Colorado Front Range outpost in a more global progressive social transformation.

We’re not sure about the “charged” part. Movements can be swift or glacial in their development. We spent a solid half hour in Colorado Community Rights Network’s booth, talking to their volunteers about various land and resource development issues throughout the state, before anyone even thought to ask us to sign up to their mailing list, much less ask for a donation. According to co-producer Tierro Lee, this is no accident.

“One of the premises to having a really, really great ‘conscious party’ … is providing options for people,” he told us a few weeks ago. “And the people will choose. And those options will all have a theme to create an uplifting experience, a positive experience.

“So we don’t pound anything over anyone’s head — we want to allow the attendee to create their own experience. When you hold a space like that, and you hold this variety of options, people will just gravitate to what they want and what they’re interested in.”

Later in the day last year, we were lucky enough to catch Bassis and Lee tooling around in a golf cart — they picked us up and brought us up the hill to the huge yoga tent (quiet, please) that afforded a sweeping view of the concourse, the Area 51 electronica stage, the Eagle and Scene stages to the north, and the vast harbor of tents and vehicles off to the southwest. For some peculiar reason, the image of Custer gazing down on the Sioux village popped into my head. The subdued hum of humanity in a transient village.

We shared that observation with Lee.

“For me, as a producer of this festival, there’s a real feeling of organizing a mass movement of people. We have just over 700 staff, interns, volunteers and artists at this event. So that’s a lot of folks mobilizing to create a very unique experience.”

Lee says that this year’s attendance looks to be about a 35 percent increase over last year’s, which was about 30 percent growth over 2014’s numbers. Which raised a question… growth is a good thing, especially when you’re trying to establish an event of these proportions as a benchmark community event. When do they know, or how will they know when the festival hits a chill-vibe ceiling; when it’s outgrown its comfortable slacks, so to speak?

“That’s a good question, I believe there is [a growth ceiling], and I don’t think we’ve gotten there yet. But we will watch closely.

“The other part to that is that we do have room to expand. Right now, we’re hosting on a hundred acres of the Sunrise Ranch, but the ranch itself is well over three hundred. So we’ll look down the road; we’ve thought, if this does grow bigger, how do we want to maintain that relaxed at atmosphere and that space.”

And some of that future growth may well come from families. Kids under 12 are free of admission to ARISE, and Lee says that persuading young families (many of whose parents came of age in the festival era) that large, three-day outdoor music festivals don’t need to be scary and disorienting experiences for their kids, is one of their primary missions.

“Absolutely. It’s important to us personally, because we’re family people and the way we run our organization is very family based … we’ve put a lot of effort into the Children’s Village, which is expanding again this year. One of the things that says a lot is that 10 percent of the population of ARISE is 12 years or younger. You look at other events, and that’s not necessarily the case.”

As for the music, this year’s headliners include Ziggy Marley, Jurassic 5, Papadosio, The New Mastersounds and Todd Snider’s Hard Working Americans. We told Lee we were also pleased to see Elephant Revival high up on the bill. The Front Range quintet has had a year touched by triumph and near-catastrophe, almost selling out a headlining Red Rocks gig in May, then barely escaping a scary bus fire in North Carolina in June, to which the band lost personal effects and musical instruments.

“They are a tremendous Colorado act, and a tremendous national act as well,” Lee says. “I just think they really embody what a lot of our audience enjoys. Colorado loves to support their musicians, and this is a perfect example of that. If you look at our lineup, you’ll see its riddled with wonderful local acts.”

For now, Lee and Bassis’ operation is running smoothly — every year is an audition for the next year’s festival. But being an outdoor festival in a climate like Colorado’s, Lee also has his sights set on the one element all the planning can’t control.

“Right now, the weather looks good. Mid-eighties, a mix of sun and clouds. Basically perfect for us.

“But I watch the forecast
every day.”