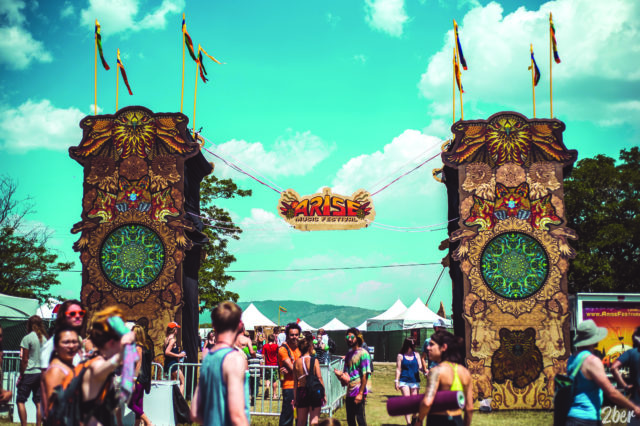 There’s a panel at this year’s ARISE Music Festival called The End of Loneliness, and in a way it sums up exactly what ARISE is all about.

“One of the most troubling things about our modern society is so many people feel alone and isolated,” says festival founder Paul Bassis. “You can be together with people in a large crowd and still feel that way.”

But not at ARISE, the once-boutique festival that has become one of Colorado’s largest parties — and that’s saying nothing of the workshops and panel discussions that get attendees thinking critically about the world they live in before sending them back out into the splendor of Sunrise Ranch in Loveland to dance and play.

“We sought to create something that was going to be uplifting,” Bassis says. “The music, the workshops, the panel discussions, all of the programming really is grounded in that intention. There’s something that happens in a gathering like this where community is created. Building community is ultimately going to be the solution to our problems.”

For seven years, Bassis and his team have worked to cultivate a festival that focuses on environmental and social justice as much as it does music and entertainment. There are dozens of panels each day, ranging from the political (Friday’s Defense Against the Dark Arts workshop, a primer for non-violent direct action) to the playful (tantra speed dating, anyone?) to the soulful (forgiveness as a path to emotional freedom). Kids under 12 still get in for free, and a tree is still planted for every ticket sold.

“If we’re going to [build community], then we’ve gotta figure out how to celebrate better. We’ve gotta throw better parties if we’re gonna build a bigger movement, a greater movement,” Bassis says. “When we do come together and we celebrate, we remind each other of the incredible gift of humanity and the degree of joy that we’re capable of as a human family. That strengthens us both individually and collectively. To me, doing this kind of work is activism.”

There are a few new touches to the festival this year. Mainstage artists and up-and-coming artists will collaborate together in playshops throughout the festival, and the public — not just VIP ticket holders like in the past — will have access to press conferences with artists in the oh-so-air-conditioned Big Sunrise Dome.

With tension running as high as ever across the American political landscape, ARISE will continue pushing to register first-time voters and connecting new activists with the communities that can help their grassroots grow.

“To build community we have to identify what we have in common,” Bassis says. “But it’s just as important to acknowledge our differences. In an ecosystem, the health of an ecosystem lies in its diversity.

“A monoculture is a desert.”

As always, music is the driving force behind ARISE, the gravitational force that pulls everyone in and holds them tight for three days. But there’s going to be a lot of music out there at Sunrise Ranch, so we put together a little list of some of the bands we thought you shouldn’t miss. We know you’re going to secure prime real estate when Tipper, Leftover Salmon, Railroad Earth and Rising Appalachia play, but it would be a shame to miss out on some of the lesser known artists (sometimes playing in far more intimate settings). While our list isn’t exhaustive, we hope it’ll help you discover a little something new each day of the festival.

Right after the opening ceremony, this Boulder-based band will dish out a healthy helping of lo-fi psych rock that’s sure to get you primed for a far-out weekend. If you enjoy The Black Angels or Brian Jonestown Massacre, Bella Duro’s got a sweet surprise in store for you.

Mihaly grew up in Fort Collins cutting his chops as a musician at his parent’s church. His simple folk melodies and enchanting songcraft are evocative of M. Ward, Ryan Adams and Leif Vollebekk.

The day is going to be hot by 2:30 p.m., but Project 432 offers up electro-tinged reggae sounds that are the very essence of the dog days of summer. For fans of Sublime or Dirty Heads, Project 432 will have you doing the rockaway.

No seriously, this is a mystery, right up until they take the stage, but Paul Bassis has this to say: “It’s someone who’s coming back into the market. It was the only way that we were going to be able to get him here was to do this, and we were excited about it. We like to give people a treat.”

Not only is this going to rock your socks off, there’s air conditioning. This playshop will explore world instruments and global musical traditions, featuring David Satori from Beats Antique on jumbush, kone, guimbri and ilimba; Tommy “Sidecar” Cappel from Beats Antique on drums and percussion; Arouna Diarra from Rising Appalachia on kora, ngoni, balafon, talking drum and djembe; and Biko Casini from Rising Appalachia on world percussion.

Guatemalan cellist and composer Pamela Symphony’s tribal, looping show is not to be missed. With the avant garde flare of Bjork and the technical proficiency of Yo-Yo Ma, Pamela Symphony offers up songs in Spanish, English, Portugese, Japanese and Kaqchikel (Mayan). Check out her wild video for “A L O N E.”

Listen, ARISE is where the weird go to get W-E-I-R-D, so let go and spiral out to the ethereal sounds of spoken word artist Fierce le Fey, aka Zoë Clare, the cosmic pop poet. Clare’s poetry encourages more vocal communication about emotions, more space for vulnerable expression and more compassion toward each other. Ain’t that what it’s all about?

CASTENA is a side project for Rising Appalachia’s David Brown, who remixes and reworks gentle acoustic sounds into something delicately danceable and soul-stirring. This is a spiritual trip-hop dance party.

Get funky. The Main Squeeze weaves rock, funk, blues and R&B into modern song stylings for a show that will make you sweat.

In complete darkness, Jordan Ashtree McCullum will lead the audience with harp and vocals in this Blind Cafe experience.

Break down the walls you’ve built with judgment and hate and go on an ego-destroying journey with Poranguí. Trained in ethnomusicology at Duke University, Poranguí (who was raised in Brazil, Mexico and the U.S) has spent two decades exploring the healing properties of sound and movement. This show will present Poranguí as a one-man orchestra, presenting ancestral songs and indigenous rhythms from around the world.

This one is special, and if bluegrass gets your heart pumping and your foot stomping, you can’t miss this one. It’s an opportunity for many of the finest acoustic pickers at the festival to get together and let it rip. This year’s pick will feature musicians from Railroad Earth and Meadow Mountain along with Bridget Law.

After the ARISE Pick, stick around the Big Sunrise Dome for this discussion and performance with Leah Song (Rising Appalachia), Drew McManus (Satsang), Big Samir (The Reminders), Amber Lily and Mikey Pauker about believing deeply in what you sing and raising your voice.

You know what this list needs? A big fat brass band. This is straight up New Orleans-style funk.

From the small town of Springhill, Louisiana, Niki J. Crawford knows how to bring the soul-funk-R&B sound that will stick to your bones long after you’ve left the show. Her voice is powerful, her lyrics poignant and her beats won’t stop.