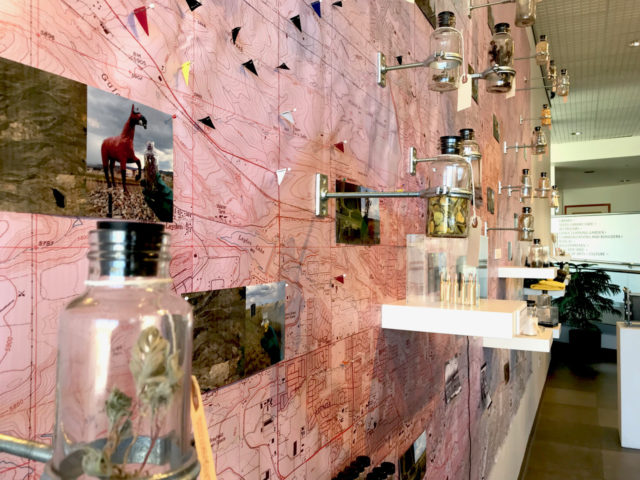 The first thing you’ll see when you walk in the door of the Boulder Public Library’s Canyon Gallery is a fluorescent-red, wall-sized image of a muddy wasteland with two identical figures in glowing yellow hazmat suits tending to steel barrels.

If you were hoping for impressionistic daisies or elegant nudes, you’ve come to the wrong gallery. Welcome to Facing Rocky Flats, a group exhibition of paintings, sculpture, photography and multimedia art focusing on the dark side of Rocky Flats, the former nuclear weapons facility 10 miles south of Boulder.

Curated by local artist Jeff Gipe, the installation “uses art and oral history to explore the past, present and future of this contentious site,” which from 1951 to 1989 manufactured an estimated 70,000 plutonium “triggers” for nearly all of the nuclear weapons in the U.S. arsenal. The facility shut down after a raid from the Federal Bureau of Investigation (FBI) and Environmental Protection Agency (EPA) for environmental contamination, and underwent a 10-year, $7 billion cleanup, which ended in 2006.

Facing Rocky Flats will run until June 10, in advance of the planned public opening of the Rocky Flats National Wildlife Refuge, 5,237 acres of grasslands surrounding the former facility site ceded to the U.S. Fish and Wildlife Service (USFWS) in 2007.

As you wander around the gallery, you’ll soon be drawn to a pile of trash bordered by red and yellow caution tape. As you inspect it, you’ll see the face of Charles Manson peeking out at you from the cover of Life magazine, an empty, pull-tab can of Coors, a Woodstock poster, a rusty steel barrel, and countless other bits and pieces of refuse topped with a globe, like a cherry on a hot fudge sundae.

Next to the pile, a child’s phonograph sits atop another steel barrel. When you set the needle on the record and slip the headphones over your ears, you’ll hear 1960s country star Brenda Lee cooing out her sappy hit, “I’m Sorry.”

This is artist Amy O’Brien’s “I’ll Cry Tomorrow,” a time capsule-like work serving as a reminder of the 1969 Mother’s Day fire at Rocky Flats, which sent unknown quantities of plutonium into the air, downwind and off-site.

A little over a decade after the fire, Gipe’s father started work at the plant as a maintenance supervisor. Though Gipe grew up in Arvada, only a few miles from the facility, due to the secrecy shrouding Rocky Flats, he says didn’t know much about it other than “they did something nuclear out there.” It wasn’t until he moved away to earn his MFA from the New York Academy of Art that he began to delve into the issue.

Part of what he learned was the history of protest, including the occupation that lasted from April 28, 1978 through April 29, 1979. Memorializing this historic upsurge of anti-nuclear sentiment, Facing Rocky Flats presents several of Joseph Daniel’s riveting black and white photographs from his book, A Year of Disobedience. Standouts include a smiling middle-aged woman holding an American flag and “We Want Truth” sign while standing behind a barbed wire fence with a placard reading, “US Property No Trespassing,” and a dozen protesters huddled together on snow-covered railroad tracks as a phalanx of helmeted police rush toward them.

While Rocky Flats hasn’t seen an occupation in nearly 40 years, opposition has been steady and fierce over the decades, including: accusations of a Justice Department cover-up (detailed in the book, The Ambushed Grand Jury); a critique of what some call a “compromised” cleanup; pushback against a prescribed burn proposed (and later canceled) by the USFWS for the Refuge in 2015; and, most recently on May 1, legal action by a coalition of local environmental groups against the construction of a visitor center and recreation trails.

As you continue along the wall, you’ll spy an oil painting depicting a bird’s-eye view of a vast ochre-yellow grassland with the Flatirons in the background: an up-to-date representation of the Rocky Flats site and Refuge lands. But this isn’t your typical landscape painting, as dozens of stark white rectangles and polygons scar the foreground, literally sliced out of the painting. You’re looking at “Gipe’s Impression,” painted on Dow Chemical Styrofoam (Dow was the first Rocky Flats contractor), which he says is about “the loss of memory and knowledge of what went on [at Rocky Flats] and what it means.”

This isn’t the first time Rocky Flats has served as Gipe’s muse. In 2015, he created the “Cold War Horse,” a life-sized sculpture of a stallion in a red hazmat suit and respirator on permanent display off Highway 72 near the outskirts of the facility. And for the past year and a half he’s been working on The Half Life of Memory: Rocky Flats and the Nuclear Trigger, a documentary film he plans to release this summer.

Due to the complexity of the topic, Gipe says it’s hard to communicate to the average person what went on — and some say, is ongoing — at Rocky Flats. Art, however, he says, “takes these huge ideas that really are almost impossible to put together in your mind [and] condenses them into this object, that then gives us all these connotations about what it could mean.”

Another way to make sense of Rocky Flats is by listening to individuals tell their personal stories. That’s the purpose of the Living Library component of Facing Rocky Flats, where individuals connected to the site will make themselves available as “books” that can be “checked out” for 15 minutes at a time.

Future “books” include Patricia Mellen, one of the attorneys currently suing to prevent trail construction at the Refuge, on May 17; activists Bonnie Graham-Reed and Marian Whitney from Rocky Flats Right to Know and Dorothy Ciarlo, Rocky Flats Oral Historian, on May 24; Tiffany Hansen, co-founder of Rocky Flats Downwinders and peace-activist Judith Mohling on May 31; and Jon Lipsky, the former FBI Agent who led the 1989 raid on Rocky Flats, on June 7.

Since Facing Rocky Flats takes a primarily critical view of the former nuclear weapons facility, those hoping for more supportive takes might do well to look elsewhere.

To his credit, though, Gipe did recommend David Lucas, manager of the Rocky Flats National Wildlife Refuge, as one of the Living Library “books.” While the Boulder Library contacted Lucas in February inviting him to participate, and he agreed to do so, staff never followed up with him for scheduling, according to emails Lucas provided to Boulder Weekly. As of press time, Boulder Library staff didn’t return calls or emails asking them to clarify the situation.

While Gipe doesn’t hide his public health and environmental concerns, he wants people to come to their own conclusions about Rocky Flats. He just doesn’t think an informed choice is possible without taking into account the “accidents that happened there, that there is plutonium left in the ground, that there was a compromised cleanup, that there’s all of this history.”

While many of the Facing Rocky Flats pieces are disconcerting, one borders on alarming.

Sitting on top of a pedestal is a square-foot, bolt-studded, black metal box fitted with a circular window, which you can peer through to see what looks like a rough silver hockey puck.

The attached label reads “Pu-239: Plutonium Button (encased),” and artist Gregg Schlanger goes on to describe how Rocky Flats triggers were manufactured out of plutonium “buttons” such as these, originally extracted from fuel rods from the Hanford Site, a now-decommissioned nuclear production complex in Washington State.

Your breath catches as you notice the fluorescent yellow sticker warning of radiation attached to the pedestal. Surely, that’s not actual plutonium, you think, as you take an involuntary step back.

After all, the library wouldn’t allow anything potentially dangerous to be put on display, unguarded, behind a few fragile millimeters of glass, would it? It goes without saying that if public health were at risk, one governmental body or another would step in and shut the exhibit down. Right?

The answer, as with all works of art, is up to interpretation.