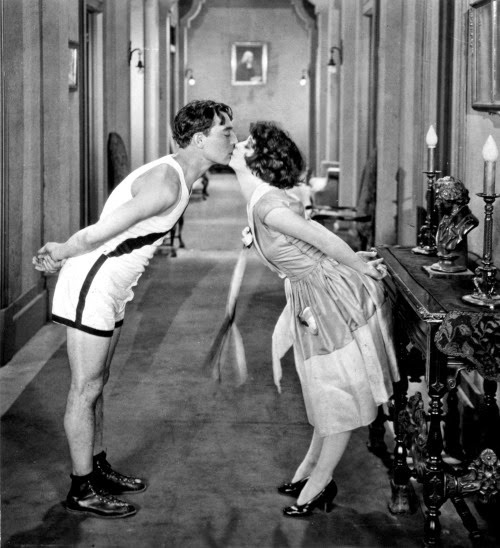 Still wonderful, isn’t it? And no dialogue. We didn’t need dialogue. We had faces. There just aren’t any faces like that anymore. —Norma Desmond, Sunset Boulevard

Of all the faces to grace the silver screen, none were greater or more enchanting than The Great Stone Face of Buster Keaton.

Born Joseph Frank Keaton in 1895, and given the nickname “Buster” for his ability to take a fall — as the legend goes, Harry Houdini was the one who bestowed the moniker; he didn’t, but it’s a good story — Keaton made his name alongside Charlie Chaplin and Harold Lloyd as one of the three clowns of the silent era. Keaton was popular in his day, but not like he’s been in perpetuity. Now, many consider him to be the greatest of the silent comedians. Partly because of his sheer physicality, partly for his seemingly endless cinematic imagination and partly because, “There just aren’t faces like that anymore.”

Shot in 1920, The High Sign was Keaton’s first attempt behind the camera and though the short has plenty of successful gags, Keaton wasn’t fully satisfied and held its theatrical run until 1921. In the interim, Keaton made seven other successful films and established himself as a comedian with The Great Stone Face, which he wore with deadpan indifference no matter the situation or how perilous the outcome seemed.

Fast-forward to College in 1927 and we find Keaton in a period of unrivaled creativity. Coming just one year after his bonafide masterpiece, The General, and with Steamboat Bill, Jr. and The Cameraman, both 1928, in the percolator, College plays to Keaton’s strengths as both a gag and stunt man. Running a brisk 65 minutes, College is sparse on story, heavy on gags. Keaton knew how to get straight to the good stuff.

The premise: Ronald (Keaton) is a high school brainiac who shuns sports. While this might sit well with his teachers and mother, his girlfriend, Mary (Anne Cornwall), falls for the handsome class jock and leaves Ronald heartbroken. But with college around the corner, Ronald decides to forgo the scholastic arts in hopes of winning Mary’s heart by making the team.

But making the team isn’t as easy as Ronald might hope. He tries baseball, then track and field, and fails miserably at both. Keaton, an agile and gifted athlete in real life, manages to squeeze every last drop of comedy out of these moments of incompetence, letting the audience revel in watching a physically capable and agile performer flounder foolishly. All with the same deadpan stone face.

That’s the secret to Keaton. Unlike Chaplin, a sentimentalist, or Lloyd, America’s everyman, Buster Keaton was always tenderly, tragically Keaton. It’s all there in the face.