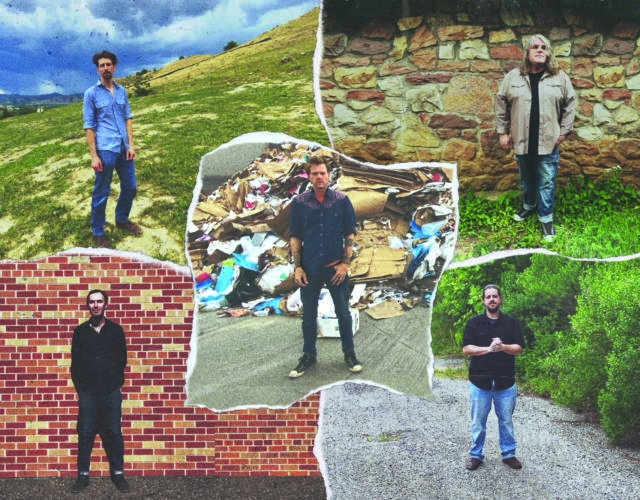 The skies were a sickly slate gray a couple of weeks ago when we caught up with Gasoline Lollipops’ singer/songwriter Clay Rose. Not so much the annual summer monsoon — we should have been so lucky — but the formless ghost of Colorado’s incinerated forests, drifting mournfully eastward like a pale funeral shroud. And much of the rest of our world, it seemed, if not burning with vigor and light, smoldered with exhausted despair and masked-up frustration. Mailboxes hijacked away to undisclosed locations. Fact-checking political pundits swinging fly swatters at the locust swarm of election season rhetoric. COVID statistics. Portland. Justin Townes Earle.

Against this toxic zeitgeist, at maybe simultaneously the best and worst time, GasPops drop their much-anticipated album, All the Misery Money Can Buy. Recorded out of town, at Dockside Studio in Lafayette, Louisiana, the album reveals a cowpunk band grown into a pair of Saturday night boots, a self-assured call to arms in places, tempered bittersweet personal testimony in others, and true to form streaked with pleas for redemption and resolve.

“A lot of curveballs were thrown at us,” Rose recalls, “but honestly, it’s been the strangest series of events. For every obstacle that was thrown our way, a bridge just magically appeared right in front of us. This would have been impossible for me to figure out, or create a strategy around, if I were left to my own devices and my own willpower. It was… metaphysical. I mean, I can’t explain it any other way. Every single obstacle was turned into a blessing.”

Amid the trials of so many musicians sidelined by the COVID curse, Rose says a combination of fortuitous timing and sheer good fortune helped the band complete recording and polishing before everything stopped.

“The last time we went to the studio… was in February, during Mardi Gras. That was right at the beginning of the pandemic, and Mardi Gras, of course, was one of the first really big red flags,” he says.

“We’d been in New Orleans the week before for Folk Alliance, and the next week we were in the studio to do some mixing and some overdubs, and then we flew home. And then all hell broke loose. Fortunately, we didn’t have to be physically present [at the studio] anymore.”

Mastered by the legendary Bernie Grundman in Los Angeles, one of only two industry guys left who still master to tape, the album kicks off with the flagship single “All the Misery,” a swampy rumination on the seemingly impossible chase after the American dream, cleverly twinning addictions to material success and the narcotics promoted to ease the struggle. The sentiment echoes with the rollicking rocker “Get Up”:

If ya’ go to their schools and follow their rules, you’ll get up.

You know I took that bet and just watched my debt blow up.

Now I’m tired of living just to pay the rent,

Elsewhere, Rose tackles toxic masculinity on the NSFW and unmistakably targeted “Lady Liberty,” a gentle ode to bestowing his son a damaged planet on “Dying Young,” and a poised country lamentation on walking away from a failed relationship on “Train to Ride,” which if there were any justice in this world would get a generous airing on country radio. And the album’s coda, a seven minute, failed-brakes homage to Nina Simone’s iconic 1965 rendering of the African American spiritual “Sinnerman” (sub Donny Ambory’s guitar for Nina’s piano) that booms and chastens and rolls like thunder.

And yeah, the listener would feel as if this were really two albums; the topical and barbed poli-social projectiles, uncompromised and unfiltered, and the more introspective, personal songs. First person plural, first person singular.

Rose concedes as much, although in the months intervening, when the world changed beneath everyone’s feet, the focus has evolved. Songs are planted on tape, but they grow and flower in the world that hears and responds to them. We asked Rose if the songs (most of which were written either collectively by the band, or with help from songwriter Max Davies and Rose’s mom, Donna Farar) feel the same as when they were originally composed and cut, pre-pandemic.

“Has the world really changed?” Rose wonders. “Or did we just put a magnifying glass on top of it?”

“But yeah, it just feels more intense,” he concedes. “They all still really apply, it’s just when I listen to them now, it’s really visceral.

“There were a few songs on the record that I thought, these songs are the canvas, like ‘Train to Ride’ or ‘Gypsy,’ these were a little lighter, maybe a little more familiar to GasPops fans. They were the canvas, and these other ones were going to be punctuated color. And now, the way I look at it, because the whole world has been ‘punctuated,’ those are more the entrée now, and the others are sort of the garnish. The sugar for the medicine. And I think they’re way more important for me now, those lighter songs, because they’re reminding me of the days before COVID. The days before… you know.”

As far as curses morphing into blessings — the GasPops was denied their summer tour this year, so Rose spent his time working on a proper publicity model for boosting the album. With help from Gregory Alan Isakov and his longtime manager, Sarah Levin, Rose navigated the tortured and perilous machinery of radio and press exposure, a minefield daunting enough under normal circumstances. He says he isn’t particularly embittered that the band can’t take the new songs out on the road, at least for the time being.

“If we had a big label where we could simultaneously be pitching it, touring it and promoting it, then we’d be doing that,” Rose says. “But I’m the management company; I can’t do all that. We were supposed to be touring all summer; if that had been the case, I wouldn’t have had the wherewithal to do the publicity, nor would we have had the funds, because all the funds would have gone into touring.”

But the spiked summer tour doesn’t silence the GasPops’ experience completely. Through the tireless efforts of longtime superfan Angela Vallero (who has virtually no experience in booking concerts), the GasPops have a two gig/one night live appearance at Red Rocks on Monday, Sept. 14. Socially distanced, CDC complaint, the whole enchilada. Managing which entrances they need and don’t need. Trash can placement. Seriously, don’t try this at home, kids.

“As we’ve been talking,” Rose says toward the end of our interview, “I’ve gotten three texts and one email from her. I mean, it’s just non-stop. They just keep throwing curveballs at her…. It was just super important for her that we finish this thing right. She’s really, really gone to bat for us.

“If we sell out two shows, we’ll break even. That’s the goal.”

“No. My average day is so goddamned stressful, any day I get to play music, that’s in the bag. Once I’m on stage, I’m OK. I can do this job.

“Every other day, I’m just bewildered.”