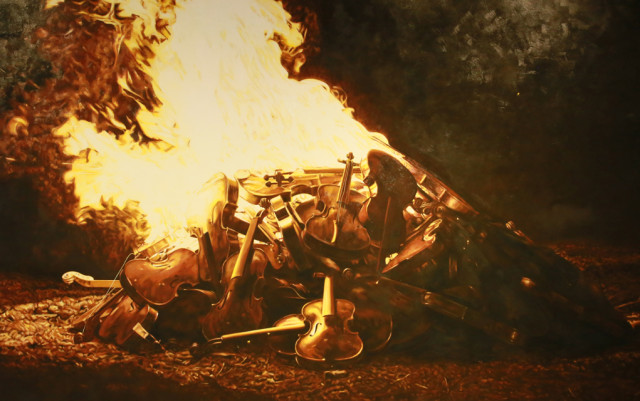 The violin is iconic. Whether because of its lovely sound or its elegant design, the violin conjures of feelings of tradition and beauty. Which begs the question: Why would artist Julie Comnick set them on fire?

She did so for her multimedia project Arrangement for Silent Orchestra, now on display at the Firehouse Art Gallery through Feb. 28. Silent Orchestra consists of several large scale paintings that chronicle a bonfire of violins from dusk until dawn. Along with the paintings is a 45-minute video of the actual burning Comnick did back in 2010. Juxtaposed with the paintings, which dwell on single moments, the video allows the viewer to experience the fire in real time.

Surrounding the paintings are pillars with violin cases displaying the remains of the torched instruments. Some are filled with ashes and small fragments of what was, while others are partially intact, adorned with some charred edges and blackened areas. Acting like a casket, the cases hold the remnants of the violin, adding to the haunting feeling of the exhibit.

The original idea for the project came about organically back in 2009, when she got the image of a pile of violins. The instrument, she says, had popped up in her work before. Music was an essential part of her household; as the only child of a piano teacher, Comnick was tasked to choose an instrument and in second grade she chose the violin.

“I enjoyed it at first. Then as many adolescents do, you have different interests, and you lose interest in certain things, and I matured. I got more interested in visual art, and I eventually left the violin behind,” she says. “Anything you aspire to do and then decide not to do sticks with you or follows you in a way.”

Comnick was interested in her own past with the violin, but also society’s. She says it’s an integral part of our culture and it holds a different meaning for everyone. It’s a handmade object that transcends musical genres and socioeconomic class, Comnick says. It’s a tradition that can be passed through generations. Even its parts — the body and the neck — are synonymous to human features.

For Silent Orchestra, Comnick chose only to use violins that were out of commission or beyond repair. She spent nine months collecting them from all over the country, finishing with almost 100. People were enthusiastic with her project, and were happy to donate violins rather than discard them in their own way (this included as decorations for walls or book shelves, and one family who was using a violin for target practice).

“The very first instrument I collected was this horribly painted thing. It looked like one of those plastic blue violins, and it had been cracked,” she says. “But the individual who gave it to me was psyched to give the violin away so that it could live on beyond his use for it.”

In the first painting, “Prelude,” the violins are set up in a discarded stack. When grouped together, it’s inevitable to ponder the life of each instrument: Who owned it? How many people owned it? What did it play? Where was it made? With each question, the individual instruments become even more significant, and as they lie in the dirt the image seems wrong.

“Part of what my work has always been about is taking these objects out of their conventional contexts for them to be reconsidered,” Comnick says. “Even piling them up, they look dumped by a dump truck. They’re ready for burial.”
In the next picture, you see the heap ablaze, which is even more jarring. It’s just as upsetting as burning books or other precious items. But it’s that reaction that drives home Comnick’s point.

“Burning can be such a horrendous act, especially when done deliberately, but what’s beyond those acts is that symbolism,” she says. “Destroying something brings the attention back to it.”

Her statement is meant to highlight the demise of traditional craft practices because of technological advancements. Comnick says she sees a push toward STEM areas — science, technology, engineering and math — instead of the arts. She notes her home state of Arizona as one of the lowest ranked for arts funding.
“This project to me is largely about the relationship between increasing technology advancement and diminishing cultural heritage,” she says. “The tradition of music practice and artistic practice can get cast aside and exchanged for technology.”

Without art there can be a lack of creativity, innovation and vehicle for expression. Comnick does see the value of technology in increasing art’s possibility and accessibility, but she’s calling for a balance. And you can see this balance in Silent Orchestra with her inclusion of photography and video.

The video also provides a soundtrack for the exhibit. While looking at the paintings you can hear the crack and pop of the fire, which helps the paintings come to life and adds to the eerie vibe of the exhibit. And notably, as the name suggests, Silent Orchestra is devoid of violin music. At first Comnick was planning on the instrument playing in the background, but the sound of the fire was much more powerful.

But Comnick does have a musical element to the show, and for those interested, she’ll be accompanying the exhibit with a live violin performance on Feb. 28. She’ll play Beethoven’s Romance for Violin in F Major, Op. 50. She chose the piece because it has elements that mirror her work, and it falls into the romanticism era, which is the style she used in her paintings.

This live portion of the project required Comnick to brush off her violin and relearn her skills, which she saw as a crucial piece to the project. Comnick started taking violin classes and practiced before every painting session. She found that the routine helped her focus.

“Typically when I would go into the studio and start painting, it would take a good hour to warm up to painting to get in the mode and get rid of all that baggage that was in your mind when you start a studio day,” she says. “But I found by starting the day with music practice, ultimately what would happen is I’d get through all that [mental] noise with music. By the time I started painting it was much more immediate.”

She has four more paintings to do until the project is done, but Comnick says she’ll be keeping music as part of her artistic process.

Throughout creating Silent Orchestra, Comnick has had a clear vision for the message she wanted to portray. But, she says, art is always open to interpretation and she loves hearing how other people view her work. When Comnick was soliciting for violins, she says she spoke with a musician who liked her project because she felt it challenged the restrictive boundaries of classical music. “It takes dismantling or, in this case, destroying it to revitalize the tradition.”

Comnick hopes the viewer will engage, and maybe consider the motivation behind their behaviors. While Silent Orchestra might galvanize some to buy a ticket to a symphony or pick up their discarded musical instrument, Comnick is also interested in that long-term, societal change that happens after ideas have soaked in the brain.

“Images sort of settle in your subconscious and ask you to revisit them over time,” she says. “That’s what I think is most powerful — when someone is shaping the iconography that means something in contemporary culture … and how that affects the decision they make in their own lives.”