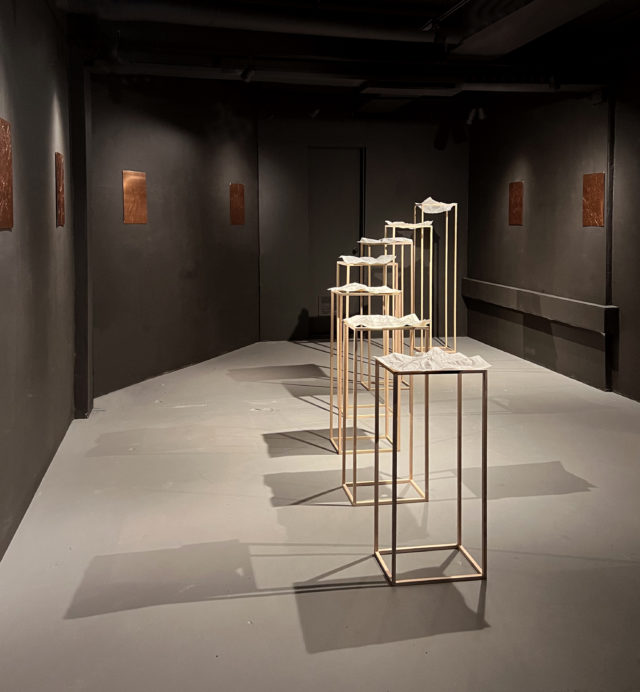 Wandering aimlessly about the internet in the early, lockdown days of the pandemic, Marina Kassianidou stumbled onto some research out of Harvard that proves there’s a mathematical pattern to the way paper crumples.

“Every time you apply pressure, the paper tries to retain its material integrity on a molecular level,” she explains. “I was thinking of it as agency; the amount of agency that the [paper] has in terms of protecting itself.”

Kassianidou likes to think about things like this, about the logarithmic folds of crinkled paper and the language of computers—“how to think like the machine a little bit,” she says with a lilting laugh, “and how things work with bits and bytes and memory registers and whatnot.”

The Cyprus native studied both studio art and computer science at Stanford on a Fulbright Scholarship before moving on to advanced degrees in fine art.

“One of the things that I really enjoyed in computer science was when we were using a programming language that allowed me to intervene directly in the very low-level electronics of the computer and interface directly in individual memory registers,” she says.

“I think that translates in some ways into the kind of art I’m making, which also deals with the very basics of mark-making, and working with a surface and learning its language almost, and then responding to that.”

In Geometric Frustrations, now showing at east window (4949 Broadway) through Oct. 28, Kassianidou responds to the surface of crumpled log graph paper, lightly tracing lines along the creases that form, recording the structural changes to the paper.

The paper—which one of Kassianidou’s art students at CU Boulder found in the trash—was printed by the U.S. Department of the Interior Geological Survey Water Resources Division, most likely to record water discharging in reverse. Its logarithmic scale, with lines that run close together, then further apart, then closer together, over and over, can be used to record data over tens or even hundreds of years.

Kassianidou shifts the recording process from the external fluctuations of the earth to the internal struggle of the paper.

“But in the process, the paper turns into its own terrain,” she says. “The reason they’re displayed horizontally in the gallery is to have that relationship to the ground that you’re standing on, so they do become this quasi representation of the earth and how we attempt to make sense of the earth. And part of the way we try to do that is by collecting data and creating graphs and trying to make sense of what’s happening around us in the geology and topography. So I see them as this attempt to try and make sense of space and place—sometimes futile attempts.”

It would seem there’s nothing humans love more than futile attempts to make sense of the world, often shoving one another into proverbial boxes by drawing imaginary lines on maps to delineate who owns what and who belongs where. It would be easy to overlay Kassianidou’s native Cyprus on this concept, where British rule in the previous century sewed dissent among Greek and Turkish Cypriots that exists today, resulting in a country divided.

But for a long time, Kassianidou refused to see the connection between her home and her art. When people, like a local journalist, for example, would ask if her art was a representation of the so-called “Cyprus problem,” Kassianidou was almost offended.

“Looking back, it is a very traumatic history that the island has lived through, and that trauma is still around,” she says. “Friends of my parents were refugees, so they remember being little and being thrown out of their homes and living through the war situation. It’s so heavy and so traumatic. Maybe I just didn’t feel that I could do justice to it in some way.”

But there’s another interpretation of Kassianidou’s art. In a response to Geometric Frustrations, filmmaker Erin Espelie compares the artist’s work to the topography of the foothills that surround Boulder, where deep-rock scars known as shear zones have formed over millennia of pressure, “where the Earth’s crust has sustained extreme internal stress.”

What shear zones offer in metaphor, Espelie writes, “is their ability to negotiate stress by changing position, sometimes subtly and other times radically.”

“Kassianidou’s Geometric Frustrations brought me into this state of contemplation,” Espelie muses, “a recognition that I sit upon a shear zone, a scarred site that can absorb stresses, high strain, and move but not break in response to where two very different strata meet. We are in a place that allows for repeated change, vulnerability, resilience, and reformation. We may wish to dispose of our past failures quickly, yet to regard our stressful, collective collapses with careful intensity, as Kassianidou does, may offer insight for the future.”

Perhaps there’s a mathematical pattern to the way humans fold as well.

ON THE BILL: Geometric Frustrations is showing at east window, 4949 Broadway, Boulder, through Oct. 28.