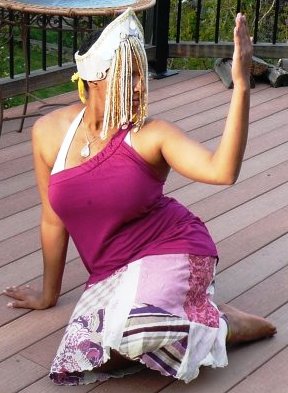 Dancing with beings seen and unseen, connecting with nature, culture, and activism are all a part of what you may find in one of the Brazilian dance offerings in Boulder. Ask anyone what the word Afro-Brazilian means and you will surely hear a concoction of definitions, a melting pot of meanings which all are based on the idea that the Afro-Brazilian is a Brazilian-born black person — which in itself turns out to be a diluted classification. The expansive dance culture coined as Afro- Brazilian dance evolved as a result of slavery and the mixing of African and Brazilian movement forms.

“In the dance world it’s a blanketed term because it’s as complex as the people it comes from,” says Lizi Martin, who teaches Afro-Brazilian dance every Sunday from 1 p.m. to 2:30 p.m. at Kakes Studios, 2115 Pearl St. in Boulder.

“The dance is mixed with everything — Carnaval steps, some folkloric steps, Condomble steps. Everything is together. You can put anything for the dances inside there,” adds Alirio Silva, a Brazilian dance and music teacher who holds classes every Saturday from 10:30 a.m. to 12 p.m. with his wife, Neisha Remaily-Silva, at Pearl Street Studios, 2150 Pearl St. “Folkloric Orixás dance is different than Afro-Brazilian.”

Orixá or Orisha dances are based off of a particular deity and combined with potent movements that evoke the essence of that particular force of nature.

“It’s the gods and goddesses of a polytheistic religion that has its roots in Yoruba and the Yoruba people of Nigeria. So most of the songs of the dances are in Yoruba and not Portuguese,” says Martin.

Some people perceive the dances and the ether of the Orixás as something otherworldly, deeply religious and even at times ungodly. Silva makes an effort to break this myth, “Some people think its OK; some people don’t,” he says. “They say it’s devil stuff and some things like that, but it’s like the same thing about Catholicism and other religions. It’s always helpful when you try to explain the culture, where you’re coming from. The more you teach, the more you learn.”

Alirio Silva, who is a descendant of Brazil, and his wife, Neisha Remaily- Silva, teach several dynamic Brazilian dance styles, including traditional Orixá dances, along with social, Samba/Afoxe dance classes for children and adults on a weekly basis.

Silva studied with Brazilian dance legend Emilia Biancardi for nearly 20 years and studied drumming with Jose Ricardo of the Ballet Folklorico de Bahia. Remaily-Silva picked up Brazilian dance forms from several sources, her main being her husband, along with the likes of Rosangela Silvestre, Quiena Ribeiro, and some of Silvestre’s students in Brazil and New York.

“Rosangela is kind of like the mom, the mother of all the Orixá dances in the U.S. as I see it, the pioneer of bringing these dances to the U.S.,” says Martin, a native of Colorado and avid world traveler who spent six months in Brazil studying the culture. She also studied with Silvestre and some of her students in Portland, Ore., and Northern California.

Martin also offers weekly classes based on the Dances of the Orixás and Samba Reggae, which is a variation of Samba rooted in the essence of African and Reggae rhythms.

“It comes from the influence of Bob Marley,” Martin says. “With the music I’ve found, it also comes from activism and black consciousness — promoting the black person, the black beauty, the black body as a positive image.”

Go into any of these dance classes and discover that there is an inherent meaning behind each dance and song. Brazilian rhythms, which are energetic and full of layers, are often a challenge for many Americans to understand. There is a certain way to catch the beat, but once it is achieved the click, the tock, and the depth of a subtle boom, all become a repetitious part of the moment — swirling together sweat and understanding.

“The most important thing for learning is to go to the culture,” Silva says. “You need to understand the connection between the music and the dance.”

“I hope that others will see that its okay to learn a new form, its OK to be interested in other cultures, and if that interest ever sparks anyone to just go for it, because that’s how we grow as people,” Martin adds.

There are many ways to feel the verve that is Brazil while in Boulder. Whether through Afro- Brazilian movement, Orixás dances, Samba, Capoeria, or jumping into the Bateria parade down Pearl Street, you merely need to head out into the community to feel a cultural metamorphosis. Echoing the shakes, pounding the floor, and lifting your head to the sky, Brazil is alive.

“There is so much life in Brazilian dance, I think that there’s a lot of joy and just real uninhibited pleasure for movement and music that just comes through the music itself,” Remaily-Silva says. “Personally, as an American, it feels really liberating to kind of lose the way we approach movement and dance.”