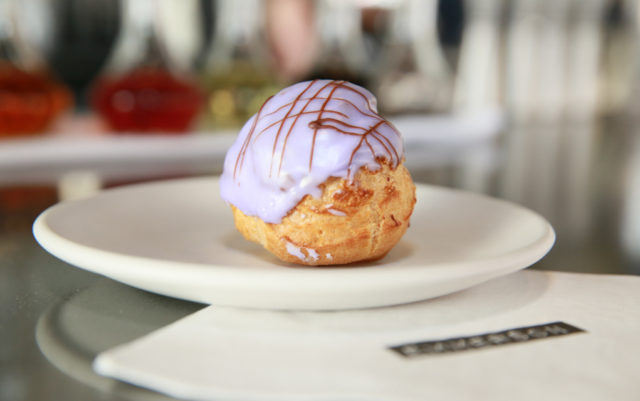 Smatta Phairatphiboon is explaining what makes Thai food exceptional. The truth is, the steaming bowl of bua loy in front of her says enough on its own. There’s just nothing like it. Purple, orange and white balls float in a bowl of hot coconut milk. The balls are made of steamed purple yam, pumpkin and taro, which are rolled in tapioca and rice flour and boiled. Their colors are vibrant, and so is the taste — salty sweet with myriad flavors that keep you guessing after the bowl is empty. The rice balls are chewy like braised grapes or marinated Quaker oat squares.

“It is a very sophisticated piece of work when you really do Thai food correctly,” says Phairatphiboon, who owns Louisville’s Busaba with her family. “It has a level of sophistication that you can taste and see. That’s a strong point that made our cuisine worldwide famous.”

Phairatphiboon would know. She grew up in Bangkok in a family that coalesced around food. Thai-centric Michelin-style restaurant guides charted the course for many road trips, and Phairatphiboon’s family would also leave the country, to Hong Kong for instance, just to eat. Conversation would often include trying to figure out what was in each dish.

“We always discussed that during the meal, ‘What’s in the sauce?’… It’s a funny conversation we had over and over,” Phairatphiboon says.

That appetite for food exploration is ubiquitous amongst Thais, Phairatphiboon says. And the average American pad-thai-eater might not realize there are five distinct cuisine regions in the country: central, which is what you’ll typically find in American Thai restaurants; northern, which builds around sticky rice and vegetables; northeastern, which is Laos-inspired dishes like larb, fried papaya salad and crying tiger; eastern, which is coastal fare; and southern, which also features seafood but has a spice level too high for the tastes of much of the rest of the country (and the world).

But it isn’t just diversity of flavor that makes Thai food exceptional, Phairatphiboon says. Thailand is the only Southeast Asian country to avoid Western colonization, and so without those forces, and the subsequent violence that ensued in surrounding countries, Thai cuisine has been able to evolve unbothered for 800 years.

“Back then, we were very wealthy because we [did] a lot of trades to China and European countries, so they [had] a lot of money plus time,” Phairatphiboon says, adding that dishes like curry, which took up to 20 people and hard work before technology made it easier, could only be perfected in such ideal situations. “And I feel like because we didn’t have our world war back then, they had time to create something spectacular that would carry on to the next generation, and to me, that’s food.”

In part because of its cuisine’s worldwide popularity, Thailand has become a favorite destination for ex-pats. So you could make the argument that although Thailand evaded formal Western colonization, its more recent inundation by Americans, Europeans and Japanese may yet have a significant impact on the culture and cuisine that Thailand has spent centuries perfecting and preserving.

“Thai people generally look very nice from the outside, but they are strong on the inside,” Phairatphiboon retorts. “So, ‘Hey, if you cross my line, I’m going to be a different person.’ They learn to protect themselves.”

But as strong an advocate for Thailand as Phairatphiboon is, she notes that since coming to the U.S. almost two decades ago, she’s found parts of Western culture have changed her personality for the better. Growing up, she was always the head of the class, outspoken and well-respected by her peers.

Phairatphiboon is inclined to say what makes Thai cuisine exceptional is its complexity — that it takes someone like her mom with a special palate to apportion ingredients; that it takes centuries-old processes to create perfect dishes; and that with proper care, flavor begets more flavor and the experience of eating a well-made Thai dish is like having a spirograph on your tongue.

But what makes complexity work is balance; you can have a fresh, rare Holy Basil leaf perfectly macerated and blended into curry, but out of balance, the effort is lost. And balance is a quality consistent in Phairatphiboon’s life.

She earned a degree in architecture while still in Thailand. When her family was given a window to accept green cards to the U.S., they took the opportunity. Her father, a builder who, notably, created Bangkok’s first convention center, worked in restaurants in the U.S. and sold buildings over the years back in Thailand to help pay bills after their move. Phairatphiboon, meanwhile, enrolled in a master’s program in Lausanne, Switzerland, and she soon found herself working on international, luxury hotel design projects.

But when the restaurant at which her parents were working went bankrupt, the family decided to open up their own place. Phairatphiboon’s father sold the remainder of his buildings, and the family purchased the shop in Louisville that would become Busaba. Phairatphiboon flew back and forth to help design the space, which is remarkable for its balance of light and wood, of comfort and energy. Soon, though, Busaba required more work than just Phairatphiboon’s parents and siblings could take on.

“I was about to sign a contract in Hong Kong, which was going to be two [years long], so I decided, hey, if my family needs help and if this restaurant is going to grow, we want to make it right. So I ended my career and came back,” she says.

Phairatphiboon, for the record, says she can re-enter what is a very niche field of hotel design when the time is appropriate. But her life changed when she came to work in the restaurant.

“It was very tough,” she says. “When you work in the huge company [I did], you’re going for international meetings in London and New York. It’s pretty glamorous. And then you come back and you’re washing dishes and picking plates and taking orders. A lot of people say when you’re in the restaurant industry people look down on you and think of you as no one, so it’s a huge adjustment.”

But amid all this change, Phairatphiboon and her family have been able to rely on food as a source of stability and love. They learned on the go about how to make their home recipes work on a restaurant scale, and how to serve American customers — “I don’t really know who started that thing like you can make [dishes] mild, medium, hot, Thai hot; I’m like, who does that?” Phairatphiboon says. And regardless of the long, winding road that got them here, Phairatphiboon says the family is happy to share their deep-seated love and unique knowledge of food with the community.

“Luckily I find joy in everything I do,” Phairatphiboon says, “because whatever I do I try to make the best out of it.”