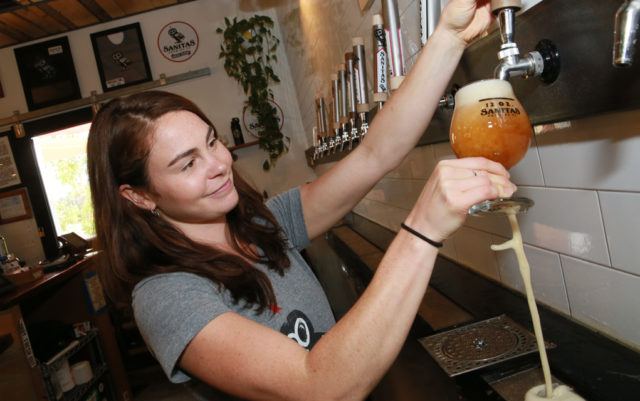 There’s nothing quite like getting a discount for doing absolutely nothing. At Sanitas Brewing Co., located just steps from the BNSF freight railway, that discount comes every time the train rumbles past and its high-pitch whistle blows. Order a Train Beer in the following 15 minutes and enjoy that ice-cold pint for $2.50. Not a bad deal for doing nothing.

Train Beers aren’t the only thing working for Sanitas; the whole package comes together nicely with a combination of what’s in the glass and what’s in the space. Sanitas’s owl mascot, with a six-pointed brewer’s star, overlooks a large and inviting brewery, complete with a spacious patio, bright play area and plenty of indoor seating for those who burn easily in the Colorado sun.

Opening its doors in September 2013, Sanitas carved out its corner of the Boulder craft beer scene with a diverse set of brews, including the aforementioned Train Beer — a low octane rotator, currently the Golden Wheat (4.1 percent alcohol by volume), which is loaded up with dank equinox hops. The variety continues from their Farmhouse-style Saison (5.8 percent) — a beautiful golden ale with bubblegum on the nose and herbal spice in the mouth — to their Black IPA (6.5 percent), which comes either carbonated (roasty and hoppy) or on nitro, which brings out the autumnal pine resin.

Both the Saison and the Black IPA can be found at your local liquor store, but you’ll have to visit Sanitas to experience the brewery’s best. Start with the Local Pale Ale (5.7 percent), a dark golden ale made from Colorado malts and hops. The keg on tap currently has a dash of coffee from Boxcar Roasters, which fills out this ale with flavor.

For those looking for a little fruit with their hops, the Sunburn Grapefruit IPA (5.5 percent) is an imperial session IPA made with whole grapefruits. As the session moniker indicates, the hops are understated, the grapefruit is mellow and the carbonation is refreshing and revitalizing.

Mellow is not the descriptor for the Nothing Rhymes with Orange Tripel (8.7 percent). Tripels use three times the malt of a standard brew, but with this much juicy orange, the malt plays second fiddle to the fruit. Few beers have a finish like Nothing Rhymes, which can last almost 30 seconds and reminds you just how delicious a tripel can be.

But you don’t have to enjoy tripels, IPAs or saisons to enjoy Sanitas. With 13 different offerings, there is a beer just for you. And if cheap is what you like, sit tight, there’s bound to be a train sooner or later.