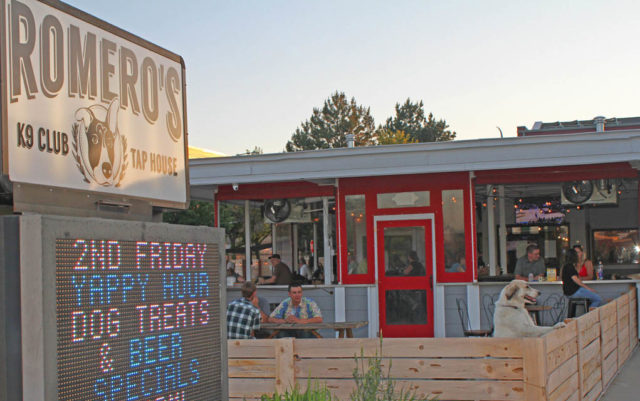 Did you know Colorado’s state animal is the Rocky Mountain bighorn sheep? Those majestic and rugged rams of the Rockies were bestowed the honor back in 1961. But, if they held the vote today, there’s little doubt the Centennial State’s honorary animal would be canine.

Yes, Coloradans love their dogs, almost as much as they love their beer. And as dog parks and breweries become ubiquitous throughout the Front Range, it was only a matter of time before someone brought the two together for the purposes of commerce. Granted, most breweries allow you to bring the pooch along with you — as long as the brewery in question doesn’t prepare food on-site — but at Romero’s K9 Club & Tap House, a typical outdoor biergarten becomes an off-leash dog park for well-behaved and pre-registered four-legged friends while you knock back a few choice brews.

Located at 985 South Public Road in Old Town Lafayette, Romero’s has transformed the former Sonic Drive-In/Snarfburger into an indoor/outdoor playroom for dogs and owners alike.

The individual carports still stand, just without the intercom ordering devices, and should you wish to sit at the drive-thru cashier’s window, a long table awaits you and your companions. The window no longer overlooks grease-stained asphalt; now the view belongs to Romero’s biergarten, where an English bulldog plays King of the Castle on the picnic tables. It’s good real estate for those who come to drink without a dog but still enjoy the chaotic sounds of canines at play.

Inside is divided into two sections: an indoor bar complete with stools, a half-dozen tables and a few TVs tuned to sports, and an indoor/outdoor, corrugated-steel, heated enclave for those willing to brave a stiff Chinook wind. Stools are lined along the horseshoe bar defining the enclave, allowing two-legged patrons a chance to sit while enjoying one of the best-curated tap lists around.

Yes, most come for the dogs, but everyone comes for the beer. With room for 33 different brews, including two nitro taps, and two kombuchas from Upstart, Romero’s is the place to dabble in a wide variety of craft brews. And not just Colorado craft, but brews from Wyoming’s Melvin, Oregon’s The Commons, Missouri’s Boulevard, even Sweden’s Omnipollo. For those who steer clear of gluten, Romero’s also has cider for all your quaffing needs.

But the tap list isn’t the only thing Romero’s has going, its extensive can and bottle list feature plenty of rarities and impossible-to-find beers, including sours from Denver’s Amalgam Brewing and Texas’s Jester King.

That’s just the tip of what you’ll find at Romero’s K9 Club & Tap House. The only thing you won’t find is a quiet corner to disappear into; Romero’s is an extrovert’s haven, filled with yapping dogs, a knowledgeable staff eager to talk beer and plenty of people ready to drink it.