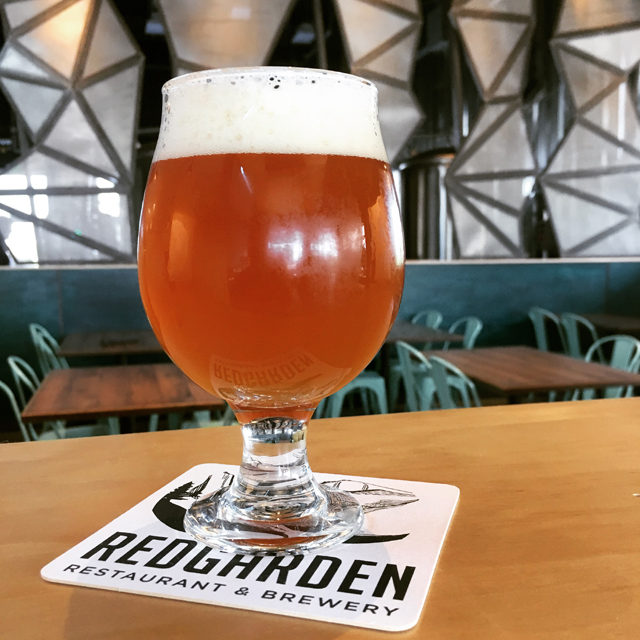 The Colorado Brewers Guild likes to call us “The State of Craft Beer,” and they’re not far off. According to the Brewers Association — the not-for-profit trade association dedicated to small and independent brewers — Colorado is home to 348 craft breweries, 8.4 breweries per capita (100,000 adults over 21). That ranks us third in the nation for total number of breweries — right behind Washington and Oregon, but still ahead of Michigan and Alaska — and fifth per capita.

Well, time to add another to the list: Redgarden Restaurant and Brewery in Louisville. The original plan was to call the joint Pau Hana (Hawaiian for “Work is done”) but a potential trademark dispute prompted the owners to change the name to Redgarden after an iconic rock-climbing wall in Eldorado Canyon.

But what’s in a name when beer is involved? Redgarden’s India pale ale, Work is Done, pays tribute to the spirit of pau hana with a West Coast sensibility: pale amber color, a full-on bitter profile and a good deal of fleshy, almost savory fruits, thanks to prominent Mosiac hops.

In total, Redgarden features eight house brews on tap — Work is Done IPA, Mexican Lager, Ol’ Denty Pale Ale, Yellow Spur Pale Ale, D&D Pub Ale, 1700 Double IPA, Burnwater Brown and Raim’s Stout — and its best offerings are the styles people tend to skip when they read down a tap list. Take Ol’ Denty Pale Ale, for example. It’s a little bit of everything: well-balanced hop bitterness with fruity esters, a lovely color of hazy grapefruit with a bright nose of citrus and even a hint of malt.

You could also try the Yellow Spur Pale Ale, which has a slightly lighter body and muted carbonation compared to Ol’ Denty. Of course, not all beers need be judged by their carbonation; D&D Pub Ale is a soft and smooth special bitter made with Fuggles hops, an old English bittering standby. The beer is rustic and robust, an easy and thoughtful drinker.

Burntwater Brown also keeps life on the lighter side of things. There’s a good deal of roast in the glass, but not so much as to overpower hints of milk chocolate. For those who need a step up, 1700 Double IPA clocks in at 9.5 percent alcohol by volume and brings a wallop of malt to balance out the uptick in bitterness and hops: Centennial, Citra, Mosiac and Columbus.

Seasoned Double IPA drinkers might find 1700 a little on the lean side, but Redgarden is just as much a restaurant as it is a brewery, so you’re better off with something lighter anyway. That’s where Ol’ Denty and D&D Pub Ale really shine. Try them with the lemongrass pork curry with fries, and you’ll see why.