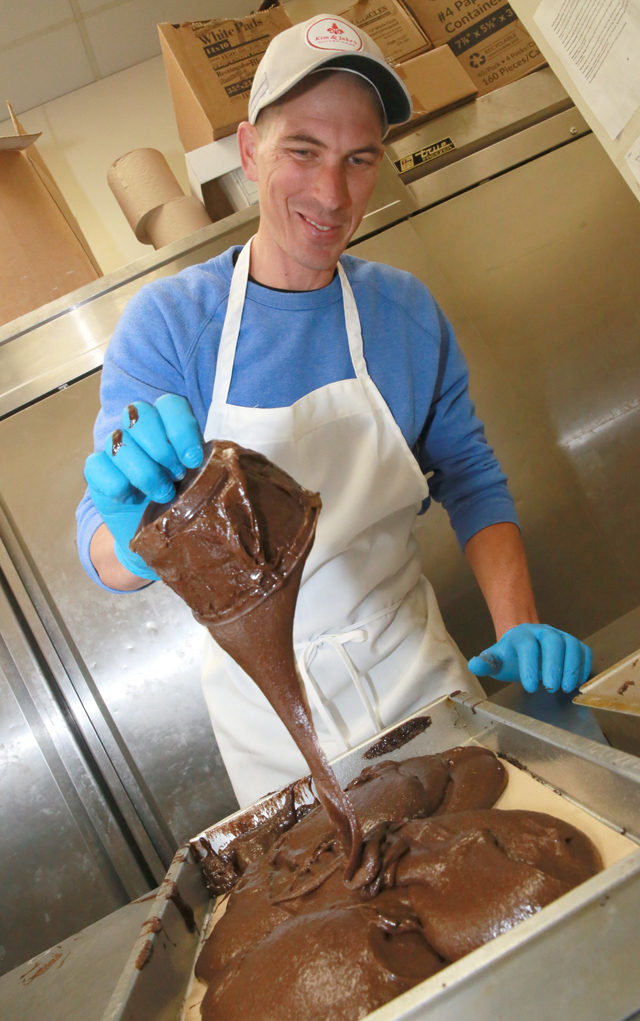 How Kim and Jake’s gluten-free cakes and baked goods came to be in Boulder starts on a date in a Colombian restaurant and bakery in Georgia.

Jake Rosenbarger was out with his now-wife, Kim, when the allure of the rotating pastry display was too great to ignore.

“I said, ‘I gotta try a slice of cake,’” Jake recalls. “And it was so delicious that I kept ordering another slice and another slice. What was fun was you could just point and go, ‘I want that one,’ because I didn’t know the names.”

There was something unique about that cake that Jake, who had grown up baking and cooking with his family in Indiana, couldn’t quite put his finger on. After a few months of regular cake-ordering, Kim, who was between jobs, took a position at the bakery at Jake’s “insistence.”— “Learn how to decorate, do whatever you can to get a job,” Jake says he told Kim.

It was a good match. Jake, a professional cyclist at the time, took Kim’s employment as an opportunity to “get in the back door” and learn from the pastry chef about how she created that cake and other baked goods. It was also an opportunity for free cake.

“I’d come back from big rides and I’d be able to just mow down cake,” Jake says. “So the trick with cake baking, you bake the cake, you take it out of the pan and it’s domed so you can’t stack cakes like that, so every cake you have to cut the top off. … They would just throw out all the tops, and I would go mine that trash can like you wouldn’t believe. I mean, it was a trash bin and they would fill it up every day.

“The bakers would just laugh, like, ‘Are you kidding me? We’ve got cake up front.’”

Flash-forward a few years and the Rosenbargers are in Boulder. When they opened Kim and Jake’s Cakes in 2010, they opened as a traditional bakery — taking recipes from the Colombian restaurant and modifying them to fit their needs (taking the lard out of cake frosting, for instance). There were increasing requests for gluten-free and vegan options, but the bakery was by all means full-dairy, all-flour.

Then, Jake was diagnosed with celiac disease in 2012. Seeing that he still had an appetite for bakery breads and sweets, the Rosenbargers used it as an opportunity to transition to a gluten-free bakery that accommodates all dietary restrictions. The impetus to make such a switch outweighed all the frustration that goes along with figuring out how to replace basics like wheat flour and eggs.

“There wasn’t a point [when I wanted to quit] because I really wanted to eat the frickin’ pancakes, and I wanted them to be good. So I’d get frustrated but just highly incentivized to do right by our customers. I want the trial and error to happen on me rather than settle on something that’s 90 percent good or give up entirely and say, ‘Forget this.’ Because I want to eat pancakes, I want to eat waffles, I want to eat cookies, I want to eat cake. If you’re into what you’re doing, you’re going to put the time in.”

Indeed, there has been a good amount of trial and error — and it’s ongoing. In the kitchen of Kim and Jake’s small bakery, there’s a bulletin board with paper sheets denoting the recipes for the latest iterations of sandwich bread, baguettes and more. The sandwich bread, for instance, has taken on 40 iterations. That comes from variations in types of flour (teff, amaranth, coconut, tapioca, etc.) to how finely milled it is, to how the flours interact together, to how it works with different gums, and much more.

And yet, Kim and Jake’s made the switch to gluten-free without really telling its clients. Some patrons would come in after a year and not even realize the recipes of the foods they’d been eating had changed- — nothing had gluten and much was friendly to those with food allergies.

Being able to buy alternative grains, gums and everything in between in bulk has allowed for constant tweaking and the continued search for quality goods. No doubt, the Rosenbargers and their team have learned a thing or two about gluten-free cooking.

“There’s not one flour that will do everything, so you need to be comfortable with trying and mixing and matching,” Jake says. “I can tell you our [blend] for our cookies and our cakes is oat flour, brown rice flour and tapioca flour, and it’s equal parts brown rice to oat, predominantly, with 20 percent tapioca relative to those flours.”

Nonetheless, Jake is eager to offer more tips to home bakers: Use less gum for things that are denser like cookies; Add baking soda or baking powder to increase lift in gluten-free products (but keep an eye on it); Take 15 percent out of both leavening and sugar in recipes that work at sea level; and bake at a low temperature to prevent immense growth, which can lead to flattening.

And that cake in the Colombian restaurant that hooked Jake in the first place? Use oil, which has a high fat concentration, more than butter, and use a lot of eggs to create a solid protein structure, which enables fat to work better.

But the Rosenbargers took more than just a cake recipe from their former employers, mother and son Cecilia and Enrique Villaveces. They also took a willingness to share happiness in the form of education: by teaching folks to bake and cook the things they like, they’re serving their community just as if they were selling them a loaf of bread.

“Sometimes you don’t know why but you just come across people who extend their hand,” Jake says of the bakers. “So we kind of emulated both their style of cake and some of the things that they did. If someone wants to ask questions, if they want to see it, please let us show you. If you can take something home and make your life better, by all means, I am happy to do whatever I can for you.”