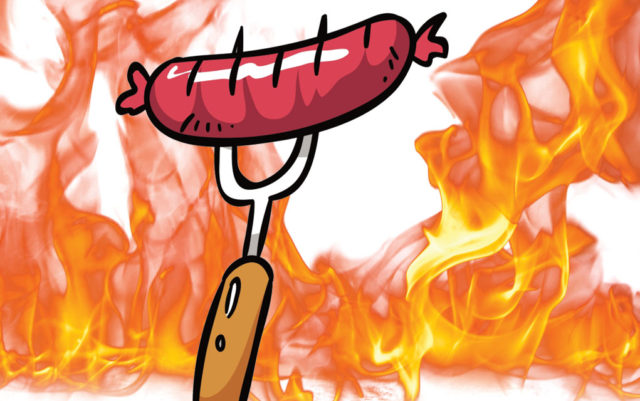 Conventional wisdom says there are two things you never want to watch being made: sausages and laws. If you knew what went into creating them, you wouldn’t like them so much.

A great deal depends on the integrity of the legislator and the sausage-maker. As the grandson of a Sicilian-born sausage-maker, I know great sausage artisans use top ingredients, not weird parts or leftovers. For fans, sausage is the main dish, not the sidekick to the main meat.

Sausage should rule the summer grill or smoker because of its variety: there are pork, beef, lamb, chicken, vegan and other sausages, and nearly every national cuisine has a grill-able sausage, from Chinese lap cheong to Moroccan merguez. Then, there are the wieners.

Most sausage, like most politics, is local, including links from Boulder Sausage, Longmont’s Mulay’s Sausage, Louisville’s Old Style Sausage, Denver’s Polidori and Canino’s, and many others made by supermarkets and butchers.

Many of you love eating sausages but, frankly, you don’t know how to cook them. Grilling sausages that thrill guests isn’t simple, and you can’t cheap-out on low-rent links and expect stunning results.

Jim Pittenger has cooked an awful lot of sausages in the past 13 years. He launched his Biker Jim’s Gourmet Dogs food stand on the streets of downtown Denver. Now, Biker Jim’s has a brick-and-mortar location on Larimer Street, a stand at Coors Field, and carts at various locations. His fans have included the late Anthony Bourdain.

Pittenger says that the first thing to know is that there are two distinct types of sausages for the grill: fresh and pre-cooked. There is a third type, cured. While sizzling pieces of salami are tasty, you are unlikely to grill a whole one. Fresh sausages include Italian sausage, bratwurst and linked chorizo in natural casings.

“Fresh sausage can be really good on the grill but you have to cook them right first. You can heat them through on the cooler side of the grill or they need to be simmered, steamed or pre-cooked,” Pittenger says.

Simmer them in three-quarters of an inch of water in a pan, or use broth or bouillon to add flavor. One secret: Add some butter to the simmering water and it adds a tasty sheen.

Pittenger is not a fan of cooking brats in beer. “Besides the fact that I don’t drink, I don’t care for beer in cooking brats because it can taste sour or bitter. A lot of people cook the sausage in their pans of sauerkraut or a mixture of peppers and onions before grilling them,” he says.

Simmered fresh sausage should be grilled whole. Slicing them lengthwise makes them fall apart and lose essential moisture and fat.

“It’s low and slow until you put them over a flame. I like a little char for flavor but there’s a fine line between caramelizing and carbonizing,” Pittenger says.

“I want to serve something that’s juicy with the right amount of sear — not cold, raw or burnt.”

To Grill a Cooked Sausage

In his business, Pittenger uses cooked sausages, including lots of game sausages — boar, reindeer and elk — from local purveyors like Denver’s CharcutNovo. Even precooked sausages need to be fully warmed before grilling, either on the grill’s cooler side or in a liquid.

Cooked sausages, including summer sausage, have a firmer texture. Pittenger butterflies them — cut in half lengthwise, leaving a hinge. Butterflying is huge. “They cook faster. It also exposes more sausage surface area to the flame. It’s the Maillard reaction with the char,” he says.

‘Dress the Meat, Not the Bun’

Butterflying also creates a perfect trough in the sausage ready for assorted toppings. Pittenger’s stated mantra is: “Dress the meat, not the bun.” It’s better on top.

For him, dressing means cream cheese applied with a caulking gun and onions cooked in cola and more exotic substances. Biker Jim’s toppings include The Desert, a blend of harissa cactus, Malaysian curry jam, scallions, cilantro and onions

Besides good quality wieners and toppings, invest in better buns and warm them before serving, Pittenger says. Heat them foil-wrapped in an oven, toast briefly on the grill, or moisten in a steamer. The ultimate are New England-style buns, spread with butter and griddled.

Boulder constantly brags about being the best this or that. Now, Boulder can claim to be home to the best restaurant service in the country. Frasca Food & Wine won the 2019 James Beard Award for Outstanding Service. … Moxie Bread Co.’s first Heirloom Grain Day celebration May 18 at Altan Alma Farm features an heirloom pie contest. I’ll be one of the judges. Fresh rhubarb pie, perhaps? It’s free to enter with neat local prizes. Competitors can pick up a free bag of heirloom wheat flour at Moxie to use in their contest pie crust. … Salvadoran native Milton Guevara is offering mission-style burritos at Nopalito’s in Boulder’s Diagonal Plaza across from the state DMV office. … Chef Jim Cohen has sold the Empire Lounge & Restaurant in Louisville to Jeff Osaka, the acclaimed Denver chef and restaurateur behind Sushi-Rama, Osaka Ramen and 12@Madison. The name and the menu at Empire will remain largely the same. Cohen continues his remarkable recovery from a serious stroke.

Since 1898, Chautauqua Dining Hall’s wraparound wooden porch has been one of Colorado’s quintessential al fresco dining locations. Since 1976, when I arrived, it’s been a personal favorite. Lately its popularity means summer weekends are ridiculously crowded. So I tend to stop by early on weekday mornings, as I did recently. Settling on the east-facing porch in the sun, I contemplated coffee, a peaceful green view and a well-made breakfast burrito topped with Cheddar, sautéed peppers and onions and a decent green chile sauce dotted with large chunks of soft pork. Chautauqua’s house-made green and red hot sauces added some extra oomph.