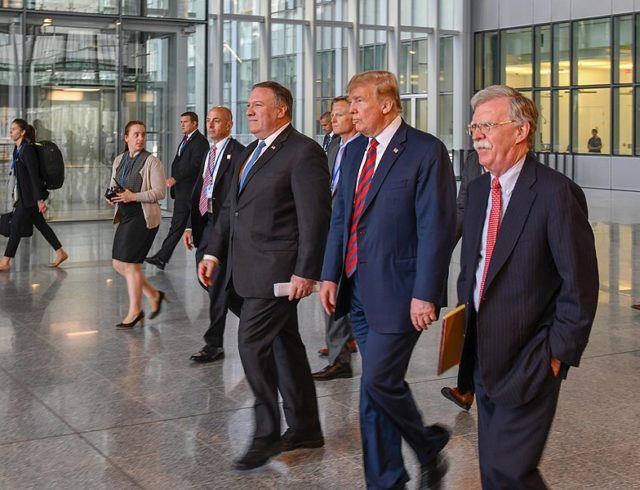 A year ago, Trump withdrew from the 2015 Iran nuclear deal and restored harsh sanctions. As a result, Iran’s economy has been severely damaged.

The deal, formally known as the Joint Comprehensive Plan of Action (JCPOA), was not just between Iran and the United States but also with France, Germany, the U.K., Russia, China and the European Union. It was reached after years of negotiations.

Iran has been complying with the deal. This has been confirmed by more than a dozen reports by the International Atomic Energy Agency (IAEA), the United Nations’ nuclear watchdog agency. IAEA inspectors must monitor Iran’s stockpile of enriched uranium on a daily basis and send four reports a year to its board of governors and the member-states of the U.N. Security Council.

The Trump administration is carrying out a campaign of “maximum pressure” against Iran. The Financial Times says “the ratcheting up of pressure looks deliberately designed to destabilize Iran, rather than bring it back to the negotiating table.”

Is the United States marching toward a war against Iran? The bellicose and reckless rhetoric of Trump, his National Security Adviser John Bolton and Secretary of State Mike Pompeo makes you wonder.

In a recent op-ed in The Washington Post, Senators Tom Udall (D-New Mexico) and Dick Durbin (D-Illinois) warned, “16 years after the U.S. invasion of Iraq, we are again barreling toward another unnecessary conflict in the Middle East based on faulty and misleading logic.”

In April, the Trump administration announced that it would end waivers that had allowed India, China, Turkey, Japan and South Korea to continue importing about 1 million barrels of Iranian oil per day. The White House explicitly stated that this action was intended to bring Iran’s oil exports to zero. Iran responded with threats to close the Strait of Hormuz, a narrow waterway off Iran’s coast through which nearly one-third of all the crude oil transported by sea currently passes.

Under the JCPOA, Iran can have only enough enriched uranium and heavy water needed for its commercial nuclear power plant. The country could produce nuclear weapons if there was a bigger stockpile of both. On May 3, the Trump administration revoked sanctions waivers, which have allowed Iran to export its surplus low-enriched uranium (LEU) and heavy water. Iran would have to stop its production of both if it reached the JCPOA-mandated stockpile limits and couldn’t export the LEU and heavy water.

The Trump administration said it wants to force Iran to end its production of LEU. The Iranian government rejects that demand since it uses the uranium to help produce electricity.

Jon Wolfsthal, Obama’s nuclear expert for the National Security Council, told Business Insider there’s “a very real risk that the cycle of political and diplomatic escalation can get out of hand, and turn into a military confrontation.”

He said, “In the past, accidents and inadvertent contact between Iran and U.S. military capabilities did not escalate into war, but it is not clear that President Trump understands the risk, or that NSA John Bolton wants to avoid those risks.”

That doesn’t mean that the Iranian theocracy is trustworthy. The regime is repressive, supports terrorism and has committed horrific war crimes in Syria defending the bloodthirsty dictatorship of Bashar al-Assad. But Trump is making life worse for the Iranian people. His actions and talk are empowering the hardliners in Tehran.

Saudi Arabia, the United Arab Emirates and the right wing in Israel are encouraging Trump. Former Secretary of Defense Bob Gates said in 2010, “the Saudis want to fight the Iranians to the last American.”

“If Iran resumes its nuclear activities, we can expect a return to the type of Israeli threats of military action that were common from 2009 to 2012. Only this time, the U.S. administration is much more likely to encourage Israeli strikes rather than seek to constrain them. Trump’s support for Israeli Prime Minister Benjamin Netanyahu’s government — which seems deeply rooted in the president’s domestic political calculations — has been unwavering and unconditional. And Trump’s closest advisors seem primed to encourage him to give Israel the green light to launch an attack. After all, in 2015 Bolton opined that the best way to address the Iranian nuclear threat was an Israeli strike backed by U.S. efforts to overthrow the Iranian regime.”

A bipartisan group of senators and representatives are trying to prevent an unauthorized war. Led by Udall and Durbin, they recently introduced the “Prevention of Unconstitutional War with Iran Act of 2019” (S.B. 1039/H.R. 2354). These bills would prohibit funding for a U.S. military attack against Iran without specific, prior authorization from Congress.

Stop the war before it gets started. It would be a gigantic disaster for the Middle East but it would also make things much worse here at home. As Iranian-American scholar and activist Trita Parsi told Democracy Now!:

“Almost none of the progressive domestic programs and reforms that the Democratic candidates are discussing right now, and will be debating as soon as the debate starts for the presidential nomination, can actually take place if by then John Bolton has started a war with Iran. Because war with Iran will be much, much more devastating than war with Iraq was.”