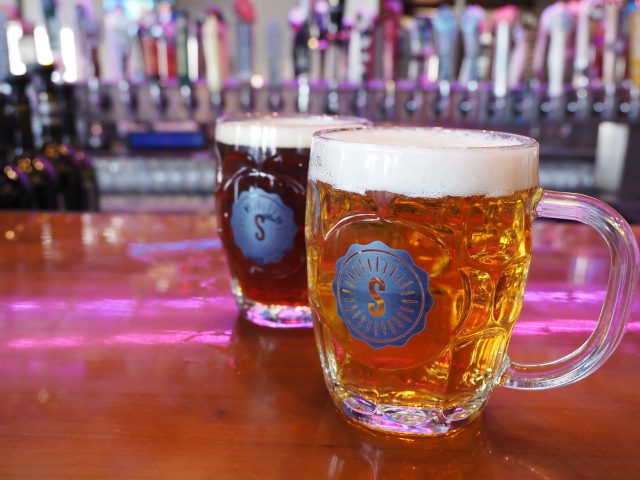 In the Boulder tradition of good craft beer, casual dining and local legacy continuation, Boulder Social, which opened its doors at the end of August last year, checks all the boxes.

“We’ve got a menu that has everything from beer and oysters to sushi, pizza, sandwiches and really great entrées,” says Alex Hindman, general manager at Boulder Social (1600 38th St.).

The brewery-turned-restaurant, which is part of the Concept Restaurant chain of eateries and associated watering holes (including the Hotel Boulderado and License No. 1), is situated in the space that was once another of its owners’ festive local offerings, José Muldoons.

“The space is great for large parties,” Hindman explains. “We constantly have big groups of people walking in and looking for a spot. It helps to fill the void that was created when places like The Med (Mediterranean) closed. We offer that kind of menu, which is really executable and approachable.”

Boulder Social, which has a sister location in Denver, Stout Street Social (1400 Stout St.), features plenty of craft beers and cocktails in addition to its wide range of food.

“We are going to pop out our fifth beer this week,” shares Hindman, who grew up in Denver, formerly worked at the Hotel Boulderado and has lived in Boulder for 20 years. “We started brewing back in December with our Social West Coast IPA and Social Hazy IPA. Then we followed that up with our Buffalo Gold.”

You may recall that Buffalo Gold was the flagship brew of Boulder Beer, which closed its taproom and brewing operation in 2019 after 40 years in business (while entering a contract with Denver’s Sleeping Giant Brewing to continue distribution of six brews by Boulder Beer). Buffalo Gold has found a new home at Boulder Social by way of owner Gina Day, who owned Boulder Beer with her husband, Frank Day, and former Boulder Beer brewer Rodney Taylor, who is now brewmaster for Boulder Social.

“He still had that original Buff Gold recipe in his recipe book,” Hindman says.

Boulder Social offers 30 beers on tap and features products by other brewers, including Avery, Upslope, Coors and Odell.

“Our goal in the next six months is to offer eight of our own Social [brand] beers on tap,” Hindman says. “We want to showcase our own beers, which we will also sell and offer in 32-ounce crowler cans, at our other locations, including Stout Street and the Boulderado. We’ll also have specialty offerings like an Irish-style stout around St. Patrick’s Day, and a pilsner during the summer.”

In addition to its line of beers, Boulder Social mixes a variety of cocktails, including an elderflower basil martini, a burnt orange old fashioned and the Muldoon Margarita.

“The Muldoon is a nice classic clean margarita,” Hindman says. “If you look at the history of the property, it used to be José Muldoons, which was owned by our owners years ago, then they sold the property, and they’ve come back to it now. So that drink pays homage to the history of the company. I’m also excited for summer to come so that we can continue to showcase our frozen drinks on the patio.”