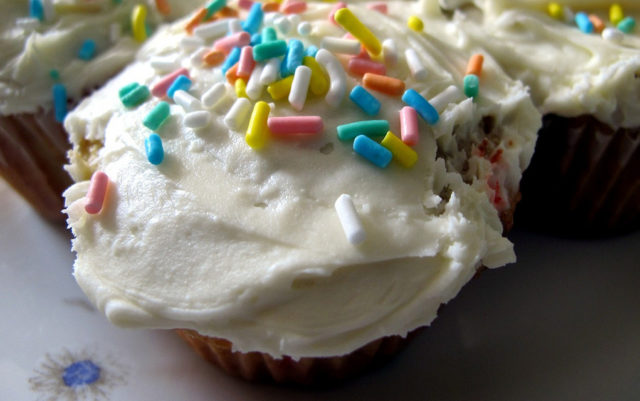 Yogurt, bottled water, pizza, poultry sandwiches, Mexican food, fresh fruit, bars, ice cream sandwiches, chips and pancakes were the Top 10 most influential foods of the past decade in the United States, according to the food-research NPD Group.

You have to wonder: Where is the kale?

This is the season of mistletoe, St. Nick and latkes for some. For food nerds like me, it is also time for the annual ritual of predicting which food trends will manifest in the coming year and beyond. I’ve culled my favorites from dozens of sources.

You have to wonder: How many of the following will still be around in 2027?

Edible water blobs: The startup Skipping Rocks Lab in London has created Ooho!, an edible water transport vehicle made from seaweed and shaped like a semi-spheroid blob that hopes to cut plastic waste.

Cake for breakfast: The Boulder-based Sterling-Rice Group (SRG) has identified 10 trends that will stand out on restaurant menus and expand onto grocery shelves in 2017 including “Wake and Cake” or dessert at breakfast. “With recent science and research endorsing this diet strategy, in the year ahead SRG expects more people to partake in this decadent post-breakfast trend,” the firm reported. We will also be snacking on sardines, chickpeas, turmeric and legumes in 2017, according to SRG.

Flat is in: Centennial-based Food and Drink Resources’ 2017 food and beverage trends include the rising popularity of khachapuri (Georgian egg pizza), okonamyaki (thin savory Japanese pancakes), jackfruit (as a meat substitute), dragonfruit, harissa (North African spice mix), fruit soups and “crowlers,” a metal version of the brewery growler that is canned at the bar.

Praise the lard: An Ipsos survey indicates that more millennials are OK with lard and are more likely to consume lard, tallow and chicken fat than a year ago. The poll found men were more open to eating animal fats than women.

Really local kale: Rutabagas grown in the state, county or even down the road may not be local enough in the future. Supermarkets are already testing fresh produce grown in, around and on top of stores, according to fooddive.com.

Mulled cocoa: Apparently red wine hot chocolate, a marriage of cocoa and mulled wine, is a thing, according to the New York Times. I thought you should know.

Watching the leftovers: According to fooddive.com, refrigerators will get even smarter in 2017 with Samsung’s Family Hub equipped with sensors, an LCD touchscreen display and cameras that take photos of the refrigerator’s contents when the door is closed. I can see this helping a small number of people with memory issues needing a fridge camera. Anybody else has to make a shopping list.

Cajeta is cool: Datassential’s 2017 Trends to Watch has cajeta on the rise. That’s a goat’s milk caramel popular in Central and South America in desserts and served with fresh fruit. Australian finger limes or “citrus caviar” are widely used in restaurant desserts and, according to Datassential, over 30 percent of us are interested in trying finger limes.

Artichoke water: Forget about coconut water and get hip with plant waters including aloe water, maple water, cactus water and artichoke water, according to marketwatch.com. Turmeric and coconut will be the top beverage flavors of 2017, according to the beverage development firm Flavorman which also likes spicy flavors, herbal notes and coffee accents in the new year.

Gruel is back: The McCormick Flavor Forecast 2017 includes global breakfasts (such as Asian rice congee and ancient grain porridge), shakshuka (eggs poached in tomato sauce), plancha (castiron grilling) and sorghum as a grain.

The election and food: “A renewed nationalism by a vocal portion of the U.S. population fueled by Trump’s presidential campaign and victory, likely will not dampen consumers’ desire for international flavors and dishes, according to some trendologists.” — Foodnavigator-usa.com

The election and supermarkets: “Over the past decade food companies have done a terrific job in reducing waste, eliminating ingredients and artificial colors and additives and improving their food safety practices. How will the food industry deal in the uncertainty of non-resident farm workers, increased tariffs on exports and imports to certain countries and possible deregulation of the FDA and EPA?” — Supermarketguru.com

Mukbang: An international online “social eating” phenomenon in which people share videos of themselves eating large amounts of food.

Flavor Tripping: The term for the oral confusion that takes place after eating “miracle fruit.” The fruit convinces your mind that everything sour or bitter is actually sweet including lemons and kumquats. Denver’s Inventing Room offers a miracle fruit experience.

Seacuterie: Like charcuterie — preserved, tasty animal parts — except from the ocean so things like pickled octopus and smoked mackerel.

Merlot cut: Along with shoulder tender, oyster steak and Vegas strip steak, the merlot is one of the new beef cuts designed to use the whole animal and cut down on waste, according to the National Restaurant Association chefs’ survey for 2017. Call it the butcher-to-table trend.

Brinner: Breakfast for dinner on restaurant menus beyond Egg McMuffins at 10 p.m. is hot.

Switchel: Try this fermented slightly sweet drinking vinegar as a sports drink. Kombucha is so 2016.

“You now have a new generation, generation Z, who don’t even have family meals anymore. In the U.S. already, people sit on a couch watching a screen, especially in single parent households. The most telling statistic is that in Europe, the sale of dining tables has declined dramatically. People still have tables, but they do everything on those tables. The table dedicated as a space for food is on the decline.” — Louise Fresco