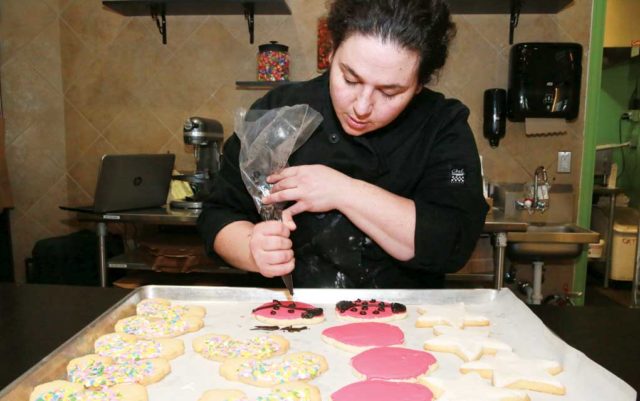 This éclair is the stuff of dreams, a chewy cream-puff expanse crammed with thick, sweet whipped cream and glazed thickly with dark chocolate. So long and so wide is the éclair that it’s enough to satisfy two — or to save half for coffee in the morning.

I love lamination, the process of layering butter into dough, and Button Rock scratch-makes the dough for a stellar flaky croissant filled with almond paste and dusted with powdered sugar.

Nearly everything created at Button Rock Bakery from the cake pops to the lemon bars is a little larger than life including the story of its birth. “I don’t do small. I think of my desserts as classic, family-style shareable treats,” Jamie Lachel says.

The 31-year-old pastry chef and her husband, Larry, co-own the bakery in Lyons. A second Button Rock bakery opened this year on Valentine’s Day at 95th and Arapahoe in Lafayette. The best-selling items in Lyons are sugar cookies and éclairs. In Lafayette, Key lime pie and scones rule.

Button Rock Bakery is not one of those bakeries that specializes in only pie or muffin tops or cinnamon rolls. “I’m too interested in all the aspects of a bakery. I like making a little bit of everything,” Lachel says. The roster includes a full line of gluten-free baked goods plus peppermint brownies and Boston crème pie (which is really a cake).

On the savory side, Button Rock’s house-baked sourdough focaccia is used for loaded breakfast and lunch sandwiches. Leftover bread is used for a rare treat, strata — essentially an eggy, savory bread pudding/quiche fusion with cheese and green onions.

Button Rock is a classic neighborhood bakery, a place connected to people’s lives as they come for sweets to celebrate and commemorate the happy and sad major events of their lives.

Jamie Lachel spent a few years in the Midwest before growing up in Lyons. The bakery’s name originated because of the couple’s affection for Button Rock Preserve near town. She was willing to sit down briefly at the Lafayette shop to talk about the pastry, family and the pleasures of being too busy.

Q: What was the first bakery you remember visiting?

A: I grew up in the Chicago suburbs. There was a place called Carey’s Bakery. The smell knocked you in the face when you walked in. I remember the smiley face cookies and the spritz cookies with sprinkles. They had bread and birthday cakes and pastries. I loved it.

Q: Did you learn baking from your mom?

A: My Mom baked at home — you know, Mom stuff, like cakes. I loved the banana bread she put in my lunch. The first thing I ever baked was cookies for Christmas when I was 6 or 7. When I was 10, I had my first business in Lyons. I had a menu of cookies I brought around to neighbors that they could order. I would bake and deliver them but I’m pretty sure Mom paid for the ingredients.

Q: How did you start your baking career?

A: My first real job at 15 was at Einstein’s Bagels. I like being on my feet and busy. I can’t picture sitting in a cubicle. My father made me get a degree in hospitality at Colorado State before I could go study pastry at the CIA (Culinary Institute of America). I was angry at him at the time, but he was absolutely right. It was essential because I wanted my own place. I wanted to do things the way I wanted to do them.

Q: How did you end up opening the bakery in Lyons?

A: I met Tony — he’s a chef who has been in the food business for 20 years, we got married and decided to settle back in Colorado. We were getting ready to open the bakery when the September 2013 flood happened. I had a 6-month-old baby at the time so having some time off was OK. We finally opened on December 3, 2013.

Q: You seem to like having a lot going on at the same time.

A: In my first year in business, I was pregnant again, we were raising a kid and opening a bakery. I finished a wedding cake, went into labor, had my daughter and was back at work in two weeks.

Q: How do you juggle family and baked goods?

A: Tony runs Lyons. I manage the Lafayette shop. We high-five when we get home. We live in Longmont near the grandparents — they are our babysitters. Our daughter Jordan is 2 and a half. Our 4-year-old son Andrew has autism. He is just amazing and now autism is the cause I support with the bakery.

Q: Do you have any advice for someone who thinks they want to open a bakery?

A: Running a bakery is way too much work for anyone to do it who doesn’t love the day-to-day work.

By the Numbers: 50 dozen

Everybody is talking about the latest viral sandwich idea: A giant cucumber pickle used like a hot dog bun for smoked pulled pork in barbecue sauce. They should be talking about the fusion of two of life’s greatest hits — that would be pie and beer. Two Niwot businesses — Powder Keg Brewing and My Mom’s Pie, have collaborated on two saison-style ales. Bumbleberry and Raspberry Rhubarb are brewed using My Mom’s Pie fruit filling. The pie-ale is being poured at the brewery. … Growler USA has opened at 1071 Courtesy Road in Louisville with 100 taps pouring beer, wine, cider and kombucha. … Turley’s Kitchen has closed, ending a saga launched in 1977 when Paul and Jim Turley opened the Good Earth Restaurant at 17th and Pearl in 1977. I know because I applied for a kitchen job there… and didn’t get it. I’ll always remember the turkey cashew sandwich and the aroma of the orange-love spiced tea at that location, eventually named The Harvest, and then Turley’s.

“It is the duty of all papas and mamas to forbid their children to drink coffee, unless they wish to have little dried-up machines, stunted and old at the age of 20.”  — The Philosopher in the Kitchen by Jean-Anthelme Brillat-Savarin (1755-1826)

John Lehndorff is the former Dining Critic of the Rocky Mountain News. He hosts Radio Nibbles 8:25 a.m. Thursday on KGNU (88.5 FM, 1390 AM, streaming at kgnu.org.)