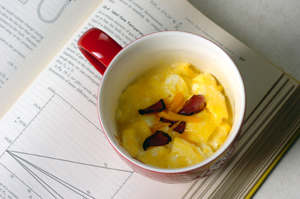 Making the grade in dorm cooking

There’s more to the college experience than fascinating lectures, frat parties and pricey textbooks. There’s all that ramen, for one thing.

Mom and Dad may have paid for a dorm meal plan, but dining hall hours don’t always jibe with student schedules or tastes, for that matter. Many students find themselves on the wrong side of campus, or still in class, when the cafeteria closes. Late-night study sessions require refueling. And a pizza-based diet gets old and fattening quickly.

So here are some fresh cooking ideas that will be equally at home at the big U or in harried non-college households, too.

These days, that’s easy to do.

People’s love affair with local, seasonal fare means farmers’ markets are popping up not just in urban centers, but on college campuses too, from UC-Davis to the College of San Mateo’s twice-weekly market, where students were encouraged to “Shake Your Pom Poms” as in pomegranates last week. University of Colorado and UC-Berkeley students can stroll to farmers’ markets mere blocks off campus.

A well-stocked dorm closet allows students to turn their produce finds into Caprese salads, bruschetta and similar simple fare without so much as a microwave oven. (Tip: Don’t store the laundry detergent near the cooking supplies or your Caprese salad will taste like Tide.)

But basic cookware such as the measuring spoons, mixing bowl and cutting board included in San Jose State’s “Spartan Survival Kit” make gourmet pursuits easy, even in a dorm setting. San Jose college students can purchase their kits, which also include a frying pan, sauce pot and cookie sheet for apartment dwellers, as part of the university’s Healthy Campus initiative.

But the biggest challenges for would-be dorm chefs are aromas and appliance restrictions, says Gaggero, who teaches college cooking classes at her Kids Culinary Adventures school in Belmont.

Be kind to your roommates, she says.

Don’t cook fish, whip up homemade pickled kimchee or burn the popcorn in the microwave.

As for appliances, read the fine print on your housing contract first. Minifridges are allowed everywhere, but the rules on microwaves, crockpots, rice cookers and George Foreman grills vary from dorm to dorm.

“We had an open kitchen where we could cook for ourselves on weekends,” says 2009 Stanford grad Molly Gerth, who lives in San Francisco now. “I learned how to make an omelet for the first time from more experienced friends when we cooked brunch for ourselves on Sundays. And some of my friends’ favorite snacks were Annie’s macaroni and cheese and deluxe quesadillas with all the fixings.”

Those are good choices, says Gaggero, and many dorms have a communal kitchen. Or you can “borrow” a friend’s apartment stove during a study session to cook a week’s worth of baked potatoes or pasta.

“Cook a week’s worth of spaghetti, penne or rigatoni,” she says. “Drain it and toss it in a little bit of olive oil, then portion control it into baggies.”

Reheat it in the microwave and add store-bought sauce; toss it with butter, garlic and fresh herbs; or top it with cooked, shredded chicken. That pasta can also be served cold, garnished with fresh veggies and tossed with an Asian peanut or sesame dressing.

Baked potatoes are also a reliable standby. Try splitting and stuffing them with cheese and broccoli, before zapping them in the microwave.

Of course, many vegetables can be cooked in their entirety in the microwave. Karen Rogers graduated from UC Berkeley last year, but the Berkeley resident still remembers slicing eggplant, drizzling it with olive oil, salt and a pinch of garlic powder.

“It was simple, healthy, and only required seven minutes in the microwave,” she says. “Another favorite was sweet potatoes sweetened with brown sugar and dabbled with butter. All I had to do was poke the sweet potatoes with a fork and pop them in the oven for 10 minutes before they were soft.”

Any final tips? Every dorm room needs a little greenery, says Gaggero. Instead of a fern, put a pot of basil on the window sill. It’s yummier.