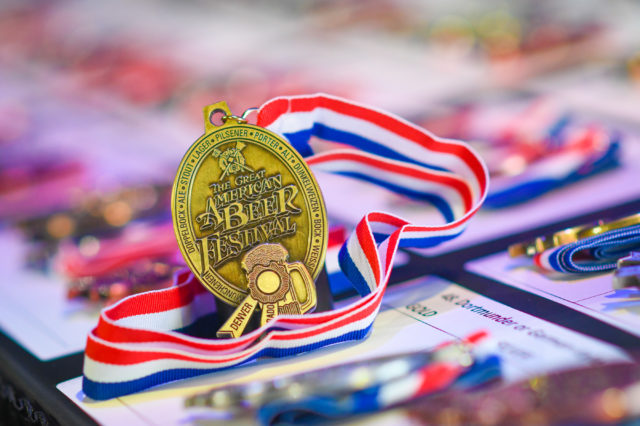 Nearly 40,000 beaming faces filled every corner of the Denver Convention Center Oct. 6-8 for the Great American Beer Festival (GABF). The event marks the 40th anniversary of the festival, the 36th edition of the competition that judges nearly 10,000 brews, and the first year back in person after its pandemic-related hiatus.

The festival has come a long way since original founder Charlie Papazian launched it in Boulder in 1982. Initially held in conjunction with the American Homebrewers Association’s annual conference, Papazian’s event saw 24 breweries and 47 beers being celebrated and scrutinized by a relatively small group of aficionados. By 1987, seven judges were on board, though the number has grown to a whopping 235 presiding over this year’s event. Boulder Beer has been present since day one and entered its Buffalo Gold, Shake Chocolate Porter and a Laws Barrel-Aged Killer Penguin Barleywine in this year’s contest. At least 90 Colorado breweries — including Avery, Twisted Pine and Upslope — graced the floor with some of the best hooch in the house.

For attendees, the multi-session beer-drinker’s Shangri-la had all the trappings of a magnificently curated adult playground. A vast karaoke stage, free chair massages, a bagpipe troupe, a dancefloor, food carts and brightly-hued clothing brands all neatly interspersed the stalls. Costumes were everywhere, with ’80s neon, gnome hats, a full herd of giraffes and plentiful lederhosens joining a nearly endless sea of matching tracksuits. The omnipresent pretzel necklaces — a tradition with no certain origin — were worn and adorned with great relish. Seasoned veterans could be seen sporting intricate chains complete with Froot Loops, Slim Jims, bags of jerky and torso-sized soft pretzels. There were even a few Guy Fieris represented both in style and attitude.

Even with the thousands of patrons, the event’s sheer vastness kept most lines from getting too long. More elaborate stalls belonging to the likes of Dogfish Head, WeldWerks, Sierra Nevada, Firestone Walker and Russian River would occasionally draw extended waits, but guests seldom found themselves idling for more than five minutes. Though the best seats in the house were found at the “taprooms”: the partnership-heavy Collaboration Nation, the “Heavy Medal” stall packed with former winners, and the section for absentee participants called Wish We Were Here.

Despite the assembly of over 2,000 breweries, the programming was actually a sizable reduction from the 2019 iteration, which saw more than 60,000 visitors. Most stalls were packing at least five of the represented company’s best brews, with plenty of special releases and GABF exclusives.

For brewers, the festival is a fierce, albeit jovial, competition in which nearly 10,000 beers — across 177 styles — are judged and awarded over 300 total medals. Local winners included Bierstadt Lagerhaus, River North Brewery, Rock Cut Brewing and Resolute Brewing Company. Left Hand Brewing Company received two medals, cementing it as the most-awarded brewery in Colorado, boasting a total of 29. The state took home a total of 26 medals, with Our Mutual Friend, Jessup Farm Barrel House, The Post, Comrade Brewing Company and Crooked Stave all scoring a gold.

Though the majority of the surprisingly well-behaved throng certainly came for the beer, some guests opted to spend their time at PAIRED, a supplementary food-focused event going on downstairs from the main hall. Formerly known as the Farm to Table Pavilion, the event was redubbed PAIRED in 2015 and continues showcasing the incredible delight and nuance that comes when great beer is thoughtfully matched with remarkable bites. Boulder-based Chef Daniel Asher (River & Woods, Ash’Kara) teamed up with Deschutes Brewery, pairing a Moroccan crunch taco with The Abyss barrel-aged stout, and a chevre tartlete with the Raspberry Champs Quad. Blake Edmunds, of RiNo smoked taco joint Mister Oso, teamed with Cheyenne, Wyoming’s Accomplice Brewing to present a beef tostada and a peach tepache ceviche alongside an imperial IPA and a contemporary gose. Chef Kelly Whitaker (Basta) and Mara Jane King, director of fermentation at IE Hospitality, kept it local, teaming with Longmont’s Wibby Brewing. Chicken salt popcorn with sourdough gochujang furikake and a kimchi-brined watermelon rind were both continued evidence of the group’s knack for the far-out and fabulous.

Outlandish attire and pervasive exuberance permeated every corner of this year’s festival. Great beer flowed from what seemed like every tap. And what could have been utter chaos coalesced into a damn near reverent celebration of the meticulous craftsmanship and honest comradery that surround the beer-making culture. It was clear that people were happy to be back.