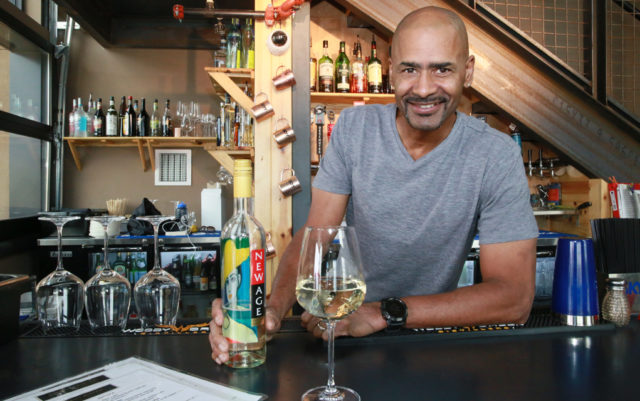 Eric Lee has done a lot in the food industry. He’s worked every restaurant position from dishwasher to owner; he’s written a cookbook; and he’s managed catering companies, nightclubs and even the kitchen at a University of Colorado sorority house.

There’s something within Lee that calls him to do so much.

“I remember my mom, I was at home and I was talking about going on a rafting trip, a five-day trip on the Yampa River, talking about the rapids and falling in, almost dying. And she says, ‘Our son, he just does everything,’” Lee says. “My dad was like, ‘That boy’s got a short attention span.’ And they’re both right. I do what I feel called to do.”

Lee, now the general manager at Gunbarrel’s Element Bistro, says although he’s had his hat in a number of rings throughout his career, food has always been the motivating factor. When he was a senior in high school in Detroit, Lee got his start in the industry via a job in the kitchen at a country club.

“I just absolutely fell in love with [restaurants] in moment one,” Lee says.

From there, Lee worked at the Pontchartrain Hotel in Detroit, where he moved his way up from room service to serving tables to tending bar. He then took a job with one of the hotel’s managers on a new project in Chicago before moving back to Detroit a year later to run a nightclub.

“I mean I’ve always had fun jobs, but I was responsible for a party five days a week,” Lee says.

Eventually, Lee got burned out on Detroit and his girlfriend (and future wife) mentioned she’d heard Colorado was nice. So they packed up the car and went for a visit.

“It was just beautiful. I remember thinking originally before we got here, that if we move out here it’s going to be Denver because I’m a city guy, and so we poked around Denver and toured it, and it was kind of OK,” Lee says. “Then we came up to Boulder and I had never seen a mountain before, so we’re coming up 36 and came over that hill and… that almost got me.

“But then we got into Boulder, we’re driving Baseline checking out houses and next thing we know, we’re up Flagstaff and we’re looking out, and it was like, OK. So we got to the turnoff, we said, ‘Let’s turn around, get a newspaper and find a place.’ That was the first 15 minutes in Boulder.”

In Boulder, Lee got a job serving tables at Flagstaff House before the stint at the Tri Delta sorority house at CU, which Lee says was “a blast.” Soon, though, there was an opportunity to buy into a restaurant, and Lee and his wife bought half of what would become Lefty’s Gourmet Pizza in Niwot.

That relationship didn’t work out, Lee says, but it launched a new enterprise, which saw him and his wife bring Sweet Tomato, a pizza and sub shop, to Lafayette and Boulder, Platinum Grill to Boulder and Portobello to Longmont. Eventually though, the strains of running those businesses took their toll on husband and wife. They ended up liquidating everything and separating. That life event put a few choices before Lee: start off in the food business again on his own or transition into something else. He chose the latter.

“I’d done everything I’d wanted to do in the restaurant business. I had three little kids, so I said, ‘I’m done with restaurants for a while.’ That’s when I became a personal trainer,” Lee says. “It was kind of a struggle at first because I was going from one occupation to something completely different. I was fit and a former athlete, but it was a completely different businesses.

“When [Element Bistro] came along, I was doing pretty good in the physical training business, I was cruising along,” he says.

What brought him back in was the unique opportunity that Element presented — a location in growing Gunbarrel, a rooftop deck, an interesting sports bar meets fine dining concept. But more than anything, it was faith that brought Lee back to the restaurant business — that he was born to be in hospitality regardless of any obstacles that may be in the way.

Lee says owning a business in an abundantly white community hasn’t posed additional problems, at least from what he’s seen. That doesn’t mean that Boulder County doesn’t have a problem with diversity, Lee says, particularly in leadership roles.

“I have debates with people about minorities and opportunity and oppression and all this kind of stuff, and I think if your purpose and destiny is in this industry or in whatever, that you taking the steps is going get you there, and there’s nothing that’s going to stop you. It’s divine providence for me; that determines what we become more than what the market’s dictating,” Lee says.

“I had a friend who was in Detroit and was having a hard time,” he continues. “I gave him a job, gave him a place to live, supported him until he got on his feet. He was here for like a year and a half, and he was like, ‘Look, dude. Ain’t no brothers, ain’t no sisters. I’m out.’ I understand that, and I don’t understand it at the same time. Boulder’s fertile ground, with a lot of different opportunities for everybody, especially minorities — if you stick around and pursue them.

“But it’s almost like a self-fulfilling prophecy,” Lee says. “Unless you reach a critical mass of minorities that you can see [in town], then minorities feel like this place is really white and [will] say, ‘I don’t know if I want to be here.’ I’m not that way, but a lot of minorities are.”

Lee says that his experience is that “people really pull for you because they don’t see minorities” in Boulder. However, Lee recalls meeting a former Denver Bronco at a car dealer convention in Detroit, and the player, who was black, told him, “Denver’s an awfully interesting place, because blacks don’t get the brunt of the ire that whites who are racists bring; it’s the Latinos. Because black is only 2 percent and Latinos are 18, 19, 20 percent and cause more fear, I guess, than blacks. So we kind of fly under the radar and do our thing.”

It’s all a matter of perspective, Lee says, when it comes to the extent of racism in Boulder County. In Detroit and Chicago, Lee says racism was “blatant,” and he had experienced being denied access to certain clubs and was passed over for promotions at work. When Detroit came out, a movie chronicling the 1967 Detroit riots, Lee realized the disparity in perception even between he and his son.

“My kids are mixed, and they grew up in Niwot, and they gangsta, they think,” Lee says. “So we went and saw Detroit, and the Detroit riots, the epicenter was where my grandmother lived. I saw troops coming up the streets and the city on fire. That was happening when I was 6 — what’s happening in Niwot? My son is 6-foot-6, a strapping guy, he just collapsed in tears … that picture was painted so vivid that that really touched him where I’m from and where we’re at and where he’s at.

“So when you talk about, do I encounter barriers here? This is Boulder, man,” Lee says.