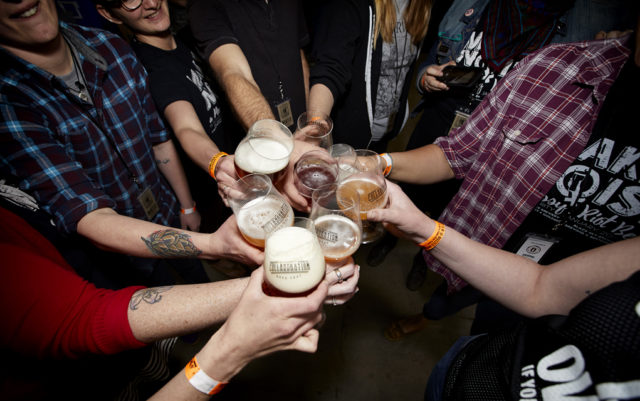 It’s possible the seemingly week-in, week-out slate of 2017 summer beer festivals conditioned you to crave the unique experience of tasting dozens of brews with hundreds of your closest friends. And, now that we’re mired in winter, you may be itching for a brew-haha to get you out of a cold-weather funk.

Luckily, there are a few get-togethers on the horizon to sate your appetite.

The Winter Craft Beer Festival returns to 29th Street in Boulder on March 3 with a slate of local and visiting breweries.

The festival benefits Community Cycles, a nonprofit that recycles, repairs and refurbishes donated bikes and boasts a 2,000-person membership that advocates for better bike transportation options. Last year, the event raised about $4,000 for the group.

Participating breweries include Sanitas, Ska Brewing, Liquid Mechanics, Wibby Brewing and many more. And for those who attended a chilly festival last year, note that the festival has been pushed up in the day, and moved into March to try to mitigate frostbite. Tickets start at $45 for those consuming beer, and are available at wintercraftbeerfestival.com.

On Saturday, March 31, the fifth annual Collaboration Fest takes over the Hyatt Regency Denver at the Colorado Convention Center.

There’s no competition at the Fest, only collaboration between dozens of gifted brewers, resulting in hundreds of unique brews for attendees to taste. You’ll find a number of interesting collaborations, from those between two Boulder County breweries to partnerships of seven or more of the best regional brewers. Some local participants include Grossen Bart, FATE, Very Nice Brewing Co. and Odd13.

Tickets start at $65, available at collaborationfest.com.

Head up to Breckenridge just as ski season comes to a close for their Spring Beer Festival on April 7. Dozens of the best local and national breweries will be in attendance.

The best part is unlimited tasting tickets start at only $35, though $75 gets VIPs in a little early and without wait, plus a collector’s mug, unlimited full-sized pours, a catered lunch and access to a special heated tent. That’s not a bad way to festival. Tickets at spring.breckenridgebeerfestival.com.

And for the seventh year in a row, Avery engages in its Big Ass Tap Takeover, which brings up to 50 Avery beers to Parry’s Pizza locations across the state. This is your chance to taste Avery rarities including barrel-aged one-off brews and vintages from Adam Avery’s cellar on tap. Festivities run April 28 from 11 a.m.-10 p.m. For more information, visit averybrewing.com.

Hit up these select beer events and before you know it, you’ll be rubbing elbows and guzzling beer in the summer sun.