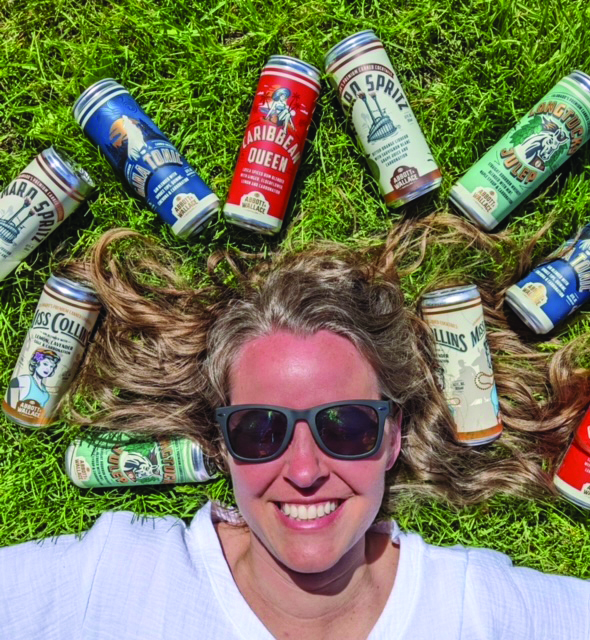 “I can get down on corn whiskey at certain times of year. I don’t mind a little moonshine,” Young says with a laugh. “It’s probably not my every day, but a corn whiskey that’s made well… maybe it makes you feel a little backwoods but I’m from Montana, I can get into that.”

A taste can tell a lot about how a spirit is made, and Young likes to sample a little bit of everything, even if it’s not her style.

Sampling whiskey is part of the job for Young, co-owner and sales manager for Abbott & Wallace Distilling. Even before her husband, John Young, started the distillery with his friend and business partner, H.K. Wallace, Young had a deep affection for whiskey and a foot planted in Colorado’s whiskey business as a sales rep for Vapor Distillery.

Whiskey-making goes deep into Young’s roots. During Prohibition, her family were moonshiners. When her great uncle went to jail, her great aunt took over the stills.

When Abbott & Wallace officially opened its doors five years ago, the Youngs were raising their first daughter and celebrating their wedding. Ready for a renewed focus on the family business, Young left Vapor Distillery to help build sales accounts for the fledgling whiskey makers.

By her own account, most of the help was from the sidelines while she cared for their 6-month-old daughter, Young says. It was mostly spreading word of mouth, helping a little with distribution and cheering on her husband and friends as the first bottles hit the market.

“It was very challenging at first, because we only had a corn whiskey and a sugar beet rum, not the main movers on shelves,” Young says.

Over those five years, Young’s role in the distillery has changed and evolved. Hours on the road making sales calls and deliveries to Denver and beyond aren’t conducive to parenting kids with medical complications, so sticking close to home made more sense. Still helping manage sales, Young now also takes on event and party planning at the Longmont tasting room.

“It’s been really fun. I love working with people to throw parties and make it a fun experience. It taps into that hospitality that I love to share with people,” she says.

Beyond the sales and social side of the distillery, Young says she does help on the stills now and then. She doesn’t have a background in distilling, she explains, but she’s spent enough time around the stills to know a thing or two. Occasionally she’ll watch the stills, but she also gets called in to help taste when the spirit cuts are being made.

Spirits come off the still in three parts: heads, hearts and tails, with the hearts being the eventual drinkable part. Young says women have a leg up when it comes to tasting and smelling the heads, something she finds a bit amusing. The heads of a spirit distillation are made up of acetone, a key solvent in nail polish remover.

“Obviously there are men who love to get their nails done, but women are a little more sensitive to nail polish remover,” she explains. “I think oftentimes we can tell the difference between the hot smell of a spirit and a solvent reminiscent of cleaning off my nail polish.”

The tasting goes beyond cuts fresh off the still and into products coming out of the barrel, she says. Being part of the team that tests the whiskey is a part of the job she’ll always enjoy, especially once the spirit fills a glass.

As a whiskey-lover, Young is looking forward to the continued growth of the industry and the variety that will come with it. Though Kentucky bourbon rose to prominence after Prohibition, Young sees the spirits world branching away from those distinct flavors, especially in Colorado.

“Just because you’re used to a Kentucky bourbon doesn’t mean these other whiskies are lesser,” Young says. “They’re a beautiful expression of the area they’re coming from, if they’re made well.”

Young is humble about her role in the distillery, but highlights the continuing importance of women in distilling, especially with retaining industry stalwarts and building up roles for new women, whether in sales or at the stills.

“It’s really important for us to support each other as women in this industry and encourage each other to move forward in those roles,” Young says, “no matter how different they may look.”