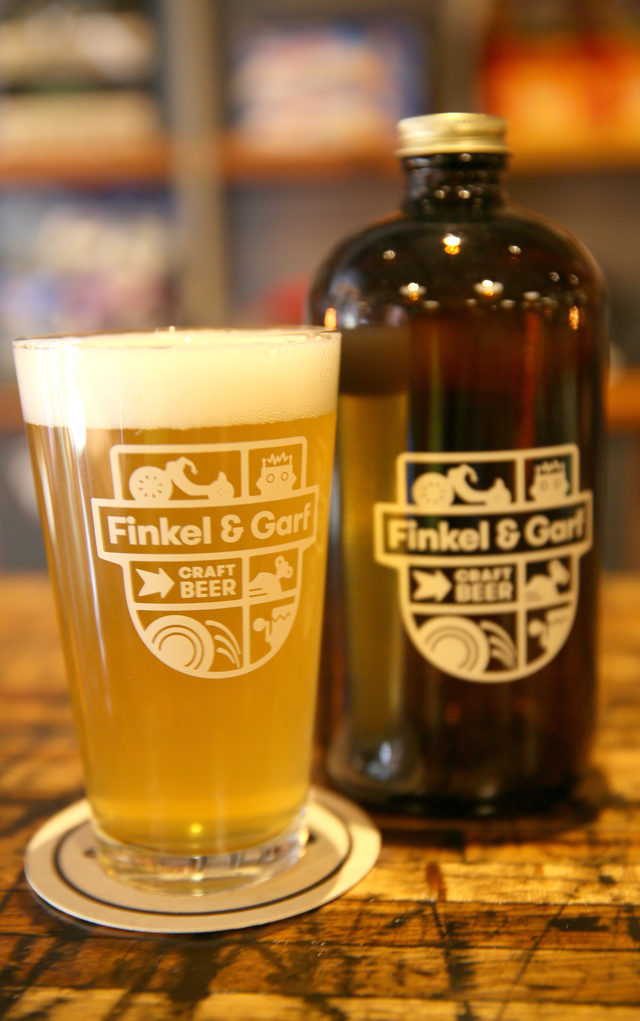 When you look at the Finkel & Garf crest, you might notice the toys first. The image of a Big Wheel, a robot and a Jack-in-the-box may not scream craft beer, but visit the Finkel & Garf brewery in Gunbarrel and it becomes apparent that these brewers aren’t just trafficking in hipster nostalgia; they are kids who refused to grow up. Toys and games are their thing and when they became of legal age, beer complemented those simple joys.

Simplicity is the motto behind Finkel & Garf, the father and son (Dan and Eric Garfinkle) team behind the two-year old brewery. When they opened in July 2014, Finkel & Garf offered ten brews and a playful taproom featuring table–top games — bowling, shuffleboard, Nok Hockey — and the kind of snacks you might pack for a road trip or school lunch — Slim Jims, Cracker Jacks, Twinkies and a plethora of potato chips.

Beers come in pints, cans, growlers and four ounce pours. Frankly, that’s the way to go. As their philosophy states: “Beer should be straightforward” and if you were to drink one Finkel & Garf, you might be underwhelmed by its straightforwardness. Drink a couple in succession, and it becomes clear: Finkel & Garf know what they are doing; they just do it with subtlety.

Though the taproom is inviting, it was a bit on the chilly side, so my drinking associate and I took our board of tasters out on to the Astroturf patio adjacent to the parking lot. She gravitated to the robust flavor of the Rye Saison while I found a friend in the floral and rounded qualities of the Cream Ale (5.4%). The Oatmeal Milk Stout (5.5%) and IPA (6.5%) were also favorites, but nothing could compare to the conversations coming from the Meeting of Unemployed Philosophers Guild to our left and the mismatched engineer student and his weed dealer, with a well-crafted Abe Lincoln beard, to our right. Honest Abe spilled his guts to his newly found friend, while the engineer explained his problems back to him in mathematical terms, even equating Abe’s father issues to that of a dodecahedron.

“That’s right on the cusp of what I’m trying to say,” Abe replied. A match made in Hunter S. Thompson’s heaven.

Back inside for another round, a large TV was tuned to yet another Michael Phelps gold medal victory, but the crowd took no notice. Their focus was on their pints, each other and shuffleboard.

You could frequent Finkel & Garf with the intention of watching the Olympics or some sporting event of your choosing, but that would be missing the point. The father and son team behind Finkel & Garf have created a brewery never-never land, a place where you don’t have to grow up, you don’t have to worry about politics and economics and you don’t have to adult. Instead, you can quaff a pint and play a little shuffleboard while snapping into a Slim Jim.