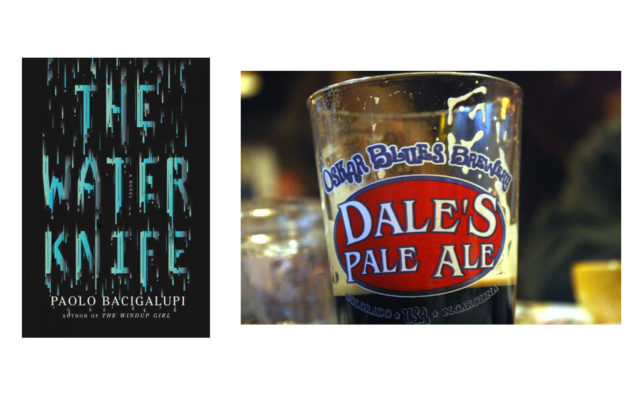 With the sun blaring, it is the perfect afternoon for reading, but not for sitting in the sun. I’m 60 pages away from finishing The Water Knife, Colorado author Paolo Bacigalupi’s sixth novel. A near-future thriller about climate change and drought in the southwestern United States, the book is a New York Times best seller and charts numerous book lists at Boulder Bookstore.

I’ve been meaning to try this for a while. Go to a bar with a book before the evening rush begins. Find a drink that complements the day’s reading material. Sip on that drink, chapter by chapter.

There’s nothing more satisfying than finishing a drink and a book at the same time.

I walk quickly to escape the heat as I approach the large door of the Outback Saloon. This might be my first time at the Outback when it’s not karaoke night. The joint, tucked away on 28th, is barren on this afternoon, in comparison. Besides the patrons watching soccer at the edge of the bar and the unobtrusive “Band On The Run” infiltrating over the speakers, it’s quiet. I’ve killed time here before — the free popcorn and cheap beer always satisfy my homesick blues.

Lucy Monroe, the water journo I’m rooting for throughout Bacigalupi’s novel, drinks beer and follows leads in cool, dark settings, like the Outback. Water is the biggest percentage of any beer. At 95 percent of today’s breweries, making one barrel of beer uses three to seven barrels of water according to Bart Watson, client economist of the Brewers Association. It’s just the kind of morsel of information Lucy would appreciate. So with that in mind, I order up a Dale’s Pale Ale on tap, an Oskar Blues’ staple American Pale Ale.

Dale’s pours a burnt amber orange with a creamy beige head an inch thick. My first sip is a gulp. The pale ale goes down cool and crisp; the taste bitter yet light and refreshing after being in the citrus Colorado sun all morning. Aromatically, Dale’s scent is a caramel malt with hints of zesty orange, mild pine and toasted bread. All flavors balanced with a dry aftertaste.

The hops are more typical than a standard IPA, Dale’s emits no false notes. Its medium body and weight make it a nice malty pale ale for sipping while finishing up The Water Knife. A hired gun gets tangled up with a young migrant and a hungry journalist in the Paonia-based Bacigalupi’s not-so-distant future, where the water wars have taken effect.

The author draws influence for his fiction from his time as an environmental journalist working for numerous national publications. Water is power in Bacigalupi’s novel. Like his other works, The Water Knife depicts the world changing and the nature of humanity as desperation.

The deadly outcome of this novel stems from society’s lack of oversight, planning and cooperation in regards to droughts and climate change. You could say it was informed by today’s very real headlines.

In that sense, pairing The Water Knife with a Dale’s Pale Ale was strategic. In January 2016, Oskar Blues sent crates of canned water to Flint, Michigan.