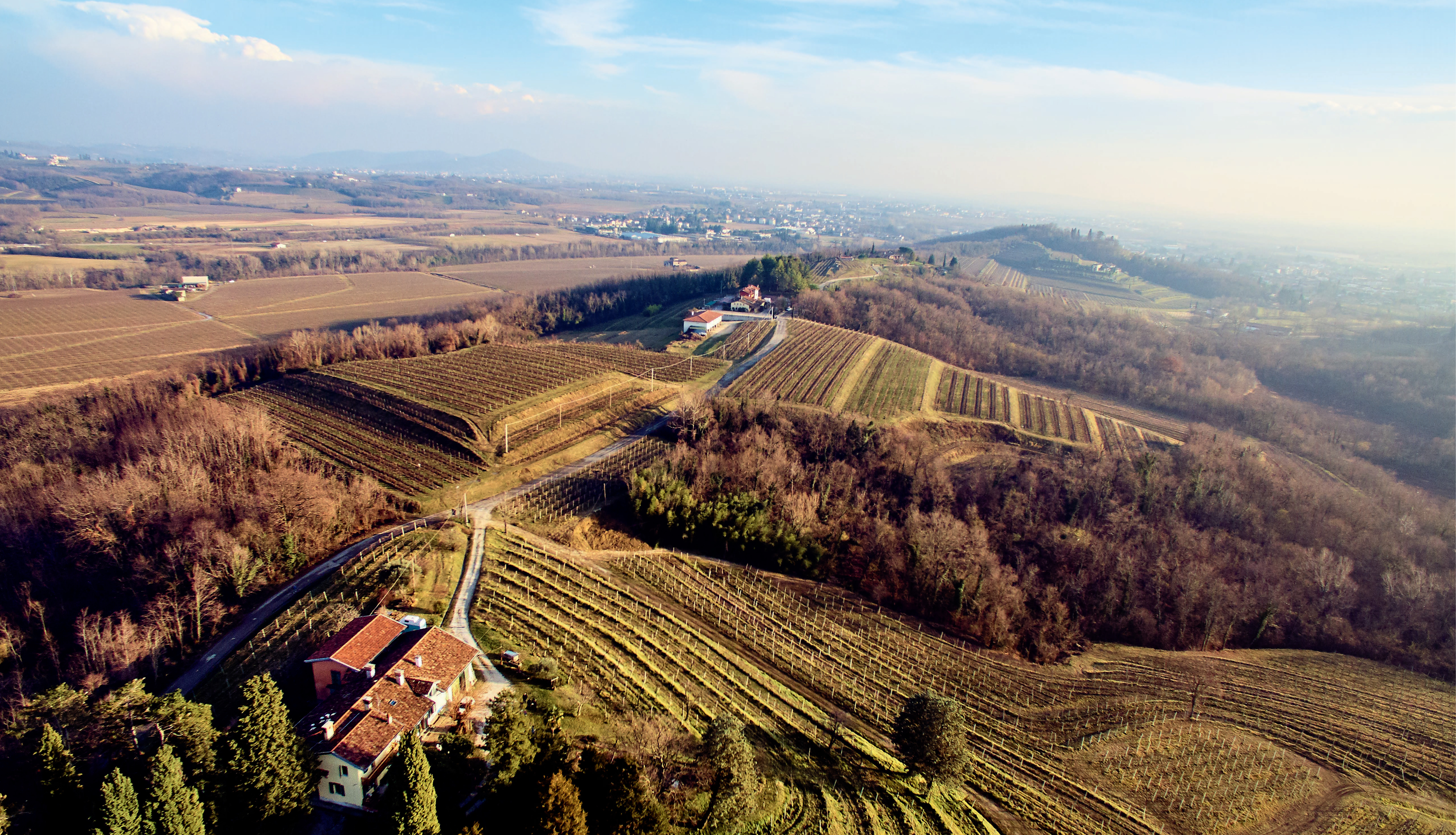 In the U.S., they’re Bobby Stuckey and Lachlan Mackinnon-Patterson, owners of Frasca, Tavernetta, Pizzeria Locale and the Scarpetta wine label. In Friuli, just outside Venice, on the border of Austria and Slovenia, they’re Booby and Lucciano.

They’re cool with it. It’s the kind of individual touch they immediately fell in love with upon visiting Friuli Venezia Giulia (FVG) for the first time some two decades ago. It’s a region steeped in cultural history and culinary individuality — a key port for Hungarian and Austrian empires, and touching both the Adriatic Sea and the Alps, FVG is a confluence of various food traditions across time, geography and politics.

And yet, Friulano food is distinctly Italian — “the best Italian food I never knew existed,” Mackinnon-Patterson says in their forthcoming book, Friuli Food and Wine. It’s a veritable love letter to FVG, its hospitality, wine and cuisine, which they wrote with Meredith Erickson (who wrote the fantastic Alpine Cooking and cowrote the Joe Beef cookbooks).

The book reads, in part, like a guide book to FVG, as the region is relatively undiscovered by American tourists, despite being just a 10 minute drive from the Venice airport.

As Boem joked to them once: “2 million Americans go to Venice, 30 come to Friuli, 20 are your staff and guests.”

Unsurprising for last year’s James Beard Award winners for Outstanding Service (at Frasca), it’s the incomparable hospitality Stuckey and Mackinnon-Patterson have experienced in FVG that makes the region exceptional and which they’ve tried to import into their restaurants in the U.S. In Friuli Food and Wine, Stuckey tells a story of their host Josko Sirk at the inn La Subida catching up to them on a motorcycle at the end of their Alpine bike ride — even though he had to host a wedding that day — to saber a bottle of sparkling wine for the group, as in a Rick Steves fever dream.

“I try to put myself in that,” Stuckey says. “I couldn’t imagine in my busy day on a Saturday if I had a buyout at Frasca and some friends from Friuli were visiting, and they were going to ride up to Ward that I would get on a scooter, go up there, saber some bubbles, give them a hug and scurry back to work. I think that’s pretty unique. That sums up authentic hospitality.”

The book dives deep into what makes food and wine from FVG unique. Stuckey outlines how different producers use a variety of different winemaking methods — from cutting edge modern to certifiably ancient — to cultivate a variety of grapes, some you’ve heard of, many you haven’t. The recipes include Frasca staples like the incredible frico caldo — a cheesy hash brown of sorts — as well as authentic, time-tested FVG dishes like buckwheat blecs (triangular pasta) with chicken braised with rosemary, cipolle al aceto (vinegar-glazed onions), venison with pear onion and zuf (an Italian porridge), fish stew, pljukanci con ricci di mare (pasta with sea urchin sauce), and poppyseed and currant biscotti. In addition to extensive tastings at FVG food establishments, Mackinnon-Patteron spent time in the Alps buying local ingredients and testing out recipes for the book with the home cook in mind.

Now, there’s also mention in Friuli Food and Wine of things you just can’t replicate one-for-one, like La Subida’s simple egg dish — made from eggs gathered nearby, cooked in a well-worn cast-iron pan and sprinkled with housemade vinegar. But the idea is to use your own local ingredients to plug into recipes from Friuli Food and Wine. One of the book’s major feats is that unlike other cookbooks from the world’s greatest restaurants, the recipes are all reasonable for a home kitchen, and if you want to add in ingredients sourced from Friuli, be their guest.

“We are very unique in Boulder. We have so many great Friulano products here now,” Stuckey says. “Carlin [Karr, wine director at Frasca], it’s been maybe eight years since she came to work; she says when she was getting ready she was trying to buy Friulano wine in San Francisco and couldn’t find it. She could go to any wine shop in Boulder and there’s hard-to-find Friulano wine. If you go into Cured, they have [Friulano] vinegar there. There’s enough wine shop owners that have gotten to fall in love with Friuli.”

The hope is you will too, but you’ll also learn a lot from Friuli Food and Wine — it’s written in a way that’s both accessible and informative, as if you’re talking to an engineer about bridge-building or watching an episode of This Old House. Stuckey, Mackinnon-Patterson and Erickson respect the reader and translate their love for them and of FVG faithfully in their stories, asides and recipes. It’s hospitality in a book.

‘A great challenge for hospitality’

The release of Fruili Food and Wine was originally accompanied by a book dinner at Frasca. However, the coronavirus canceled that event, and effectively shut down Frasca, which temporarily boarded up its windows a few weeks ago.

But in response, Stuckey has become a leader in pushing for funds to keep the restaurant industry nationwide afloat. It’s a new muscle he’s had to stress, and it’s kept him busy.

“Nine years ago I didn’t know much about public policy and I didn’t know how much our industry meant to the U.S.,” Stuckey says. “My full-time job for the last eight weeks has been helping start the Independent Restaurant Coalition (IRC), which is startling that we’ve gotten this far without.”

IRC has sent a letter to Congress asking for a stabilization fund for restaurants, which employ 11 million people in the U.S., with another 10 million jobs tied up in ancillary industries from farming to trucking to design companies. Collectively, the restaurant industry is one of the country’s biggest employers, but because it lacked collective representation, other industries that employ far fewer people, got federal support. Stuckey says 30-50% of restaurants are in danger of closing because of the shutdown.

“I didn’t understand the magnitude of that eight weeks ago,” he says. “On [Capitol] Hill, both sides of the aisle did not understand this so it caught everyone off guard. When you pull us out of the ecosystem, stuff caves in, and it’s caving in more and more.”

Paycheck Protection Program (PPP) loans don’t work for restaurants, as they can’t employ people when their doors are shuttered, and can’t employ enough even if they switched to takeout/delivery models. That said, Frasca recently launched an “At Home With” series of takeaway dinners that add in tele-calls with Stuckey, winemakers and Frasca staff.

But to-go dinners are not a viable long-term solution, Stuckey says.

“The optic of to-go feels good. It lets you not worry about what’s going on,” he says. “We started weekly pickups, but at the end of the day we’re going to use 10 employees to do all those packages for two days, but really that means there’s another 215 employees not working. So if you look at it at the macro level, no, to-go is not going to help things. It’ll keep a couple people afloat, but it could drive others out of business quicker — when you do a pivot, did you have your numbers right for it in a time that capital needs to be protected? You can put yourself in a tough situation.”

Stuckey is an optimist though, and of course he views the future challenges the coronavirus will present — how to socially distance in a restaurant, how to calm fears — through the lens of hospitality.

“This is a great challenge for hospitality people, because hospitality is taking care of other people, and this should give us a great opportunity when they might be skeptical or stressed out,” Stuckey says. “I think there’s a huge need for hospitality now more than ever; it’s just going to look different.”