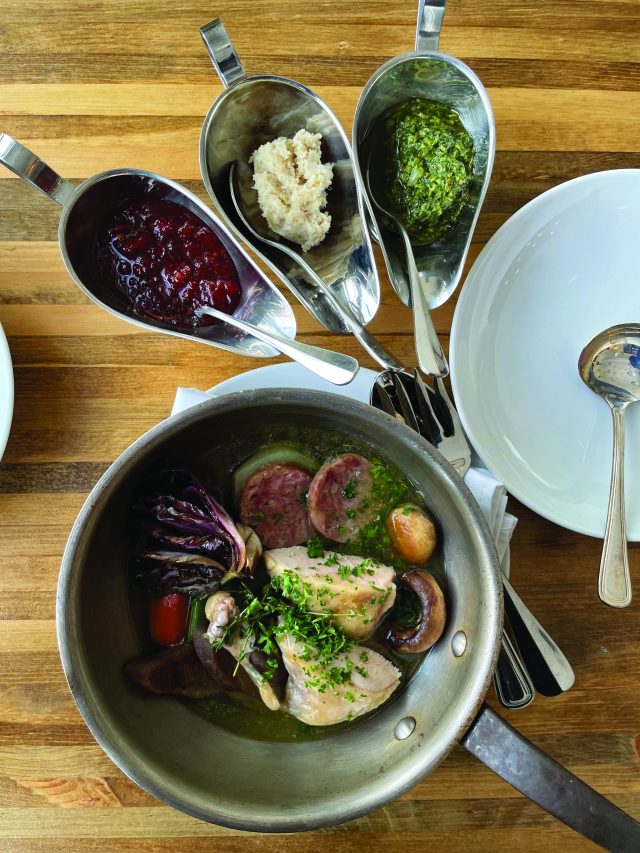 For more than a handful of prominent Colorado chefs, hearing the name Theodore Adley will immediately elicit grins and wistful recollections of joyous time spent somewhere on the line. Over the course of the past two decades, Adley has worked in some of the state’s most revered kitchens and has influenced and shared formative moments with many of the culinary stars who continue to shape what Colorado dining is about. Corrida’s Samuel McCandless and Bar Dough’s Russell Stippich come to mind, but the list goes on.

So when Adley opened Marigold in a 32-seat dining room in downtown Lyons last summer, there was immediate buzz, with many wondering how such an important industry vet wound up in this small mountain town.

Adley says he and his wife Jaclyn had discussed the idea for years. “‘Why can’t we just open a cute little restaurant somewhere?’ was an ongoing refrain that popped up throughout the snafus,” the chef says. “I’ve always wanted something in a smaller town. Something a little more rural, a little quieter.”

The restaurant is indeed cute. The cozy dining room was designed to elicit all the closeness and structured joviality of a well-orchestrated dinner party. Adley says customers, often regulars, will bounce between tables when service gets going. The menu is roughly 10 to12 items on any given day, with only a few consistent items that have stayed since day one. “We reprint the menu basically every day. That dynamism is an eternal part of the business model,” says Adley. “I also have the attention span of a hummingbird on LSD.”

Adley, who was born in Texas and raised in New Jersey, began his cooking career while still in high school. After moving to Boulder in 2004 to study history at the University of Colorado, he decided to continue his culinary path by attending the Culinary School of the Rockies. “I do music, writing, and visual arts. I like to consider myself a pretty creative person. Cooking was a way to monetize a craft,” he says.

So in 2006, Adley took a position working nights on the sauté station at Flagstaff House while doing production and making pasta at Frasca during the day. “It ignited my passion for Italian food,” he says, noting that the mercurial menu at Marigold is loosely inspired by the cuisines of Northern Italy, Southern France and the Alps, while still having no real geographic constriction. “I think we just do things earnestly.”

In late 2007, Adley left Boulder to take a job at Montagna, what was then the in-house restaurant at Aspen’s ultra-luxury institution The Little Nell. “The aesthetic was exactly what I was looking for. High quality, direct and big flavors,” he says, adding that he learned a tremendous amount about butchery, cheese-making, aging and canning during his time there.

After returning to the Front Range, Adley did a stint at Radda, North Boulder’s now-shuttered ode to Tuscan fare, before he opened his own spot on Pearl Street in 2010. The Pinyon, a new-American farm-to-table joint known for its fried chicken, lasted a couple of years in the space that now houses Leaf. From there, Adley acted as chef at The Squeaky Bean, did a bit of consulting, and then helped open the raw bar at Rino Yacht Club when it was still serving an astounding seafood and snack program off a few induction burners in the center of The Source. In 2017, Adley moved to The Populist.

“That was an important restaurant for me. Everything was done with really healthy intentions,” Adley says. “I basically got to cook the food I had been wanting to cook for a very long time,” he continues, noting that the menu of eclectic, low-key bites loosely inspired by Japanese and French food has continued to inform his menu development to this day. It might also be worth noting that before opening Marigold, Adley acted as chef at Dunton Hot Springs, the famed rustic Relais and Chateaux property outside of Telluride.

So it should come as no surprise that the food at Marigold is exquisite. But beyond the plate, Adley has made sure Marigold is an all-encompassing experience. “We’re adapting the levels of service you’d expect at a Michelin star but with absolutely no ego tableside,” says front-of-house manager Eric Bronson, another industry vet who Adley says came out of retirement to run the program. With experience at The Kitchen, Brasserie Ten Ten, Bacaro and Daniel in New York, Bronson’s hospitality direction lives up to the claim. It also doesn’t hurt that Adley says no one working the floor has been waiting tables for less than 16 years. Another key player is bar manager Amy Hobbs, whose London Fog Toddy, with gin, Earl Grey and a cream float, is reason enough to visit.

The menu is full of items that appear standard but wind up being anything but. The devils on horseback come with quince rather than dates, and the Marigold Caesar come stopped with a healthy helping of bonito flakes. The half chicken under a brick is another day-one that’s not likely to leave the menu. There’s a good reason it’s a favorite — the crispy bird comes atop a bed of spiced yogurt, carrots and bright salsa verde.

Adley is still in the restaurant every day it’s open, which is currently Wednesday through Sunday for dinner. “I’m a line cook. I cook at the sauté station. I love it — you have to,” he says. “My heart and soul beats in a restaurant. I can’t imagine doing anything else. Feeding people — it’s a tremendous honor to have.”