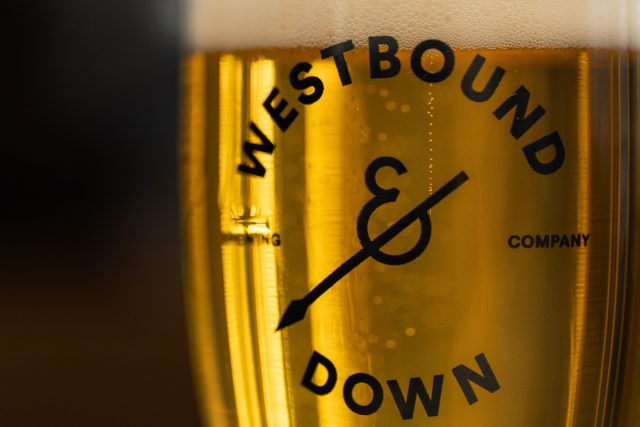 When Chef Casey Taylor took the helm of the culinary program at Idaho Springs-based brewery Westbound and Down, the location already had a good thing going. This was the tail end of 2020, and despite being thoroughly mid-pandemic, the place was still popular for its upscale pub fare.

“We’re really known for our burgers,” says Taylor, who now oversees the kitchen at the original location as well as running the pizza program at the Westbound and Down Mill in Lafayette (2755 Dagny Way, Suite 101).

The Mill opened at the end of 2021 and has been pushing pies and pints to a growing number of regulars ever since. The space is home to a 15-barrel brew system as well as the full canning line for the whole of Westbound’s three-location operation. A taproom in downtown Denver’s Free Market serving highlights from the brewery’s ever-changing lineup joined the roster in August of last year.

The beer has been great since Westbound opened its doors in 2015. At this year’s Great American Beer Festival, the brewery took home a silver in the English Pale or New Zealand Pale Ale category for its Spirit of the West, earning another silver for its collaboration with Bierstadt Lagerhaus, the Chicago Peaks Kolsch. The team is great at producing fabulous renditions of standards like a Mexican lager and an Italian pilsner, as well as doing more far-out styles like the Fruit Squad, a barrel-aged golden sour with Oregon raspberries.

Taylor made some minor changes to the food in Idaho Springs, but the pizza served in Lafayette is entirely his creation. The place offers both square Detroit-style pies as well as round renditions, all showcasing Taylor’s 72-hour fermented dough. There are a few snacks on the menu, wings and roasted pumpkin hummus being some of the standouts, as well as some salads, but The Mill was designed to showcase the pizza.

“We wanted to make sure pizza was the star of the show,” Taylor says.

Taylor was born in Cedar Rapids, Iowa, and developed an early love for cooking while helping his mom and aunt as they cooked what he describes as a revolving set of Midwestern classics. He began cooking professionally during his senior year of high school at a local Italian restaurant and continued to work the line locally until he scored a job as a corporate chef for Brinker International. Throughout the course of the next seven-and-a-half years, he opened more than 60 Chili’s in California, Texas, the Chicago area, and even one in Germany.

Burnt out by what amounted to nearly nine months of traveling a year, Taylor relocated to Colorado, fulfilling a life-long desire to enjoy the bounty of the mountains.

“I visited Keystone when I was 13. I knew I wanted to move out here,” he says.

It didn’t take long before Taylor ran into another Cedar Rapids local, chef Justin Brunson of Masterpiece Delicatessen, Old Major and River Bear American Meats fame. The two had known each other since high school, having run in similar circles since Taylor was 15. From 2010 to 2020, Taylor acted as the director of operations for Brunson Concepts, working as the chef de cuisine for Masterpiece as well as working across the restaurant group’s individual concepts. He is still a partner in Culture Meat and Cheese, which currently boasts locations in both the Denver Central Market and Denver International Airport.

Over the course of Taylor’s tenure, Old Major and River Bear became synonymous with the best in Denver meats, with the restaurant helping to usher in a new era in the city’s rustic fine-dining culture while the factory produced and distributed sausages, salumi and bacon to restaurants and grocers across the region. Brunson became known as one of Colorado’s real champions for local and ethical sourcing.

During the early stages of the pandemic, Taylor took some time to focus on his family while figuring out his next move. The dough he currently serves at Westbound and Down was largely developed at home, with the initial blueprint forming for no other reason than a legitimate love of pizza. The dough is made with flour, water and poolish (a loose, spongy dough) made with both active dry yeast and some of Westbound’s beer.

“Pizza and beer are so compatible it’s ridiculous,” Taylor says with a grin. The menu currently consists of eight distinct pies, each one delightful on its own, though best paired with any brew from the evolving list.

“It’s impossible to plug one style of beer with any particular pizza,” says Taylor, noting that while nothing on the menu was made to pair with specific draughts, the union of pizza and beer is quintessential enough that there is no wrong combination. “They are definitely a happy couple.”

Each pie is named after a local street. Pies like The Baseline, with mozzarella, brick cheese, red sauce, basil and olive oil have obvious inspirations. More original pies like the 95th St., with mozzarella, Ezzo pepperoni, salsa verde and a delicate brushing of spicy honey, show off Taylor’s knack for making outlandish amalgamations that work. Vegetarians can rejoice in The Arapahoe, which fuses mozzarella, artichoke hearts, mushrooms, sliced cherry tomatoes, red onion, broccoli and romesco for one of the best selections on the list. There is also a revolving pizza of the week. Taylor says the menu is likely to grow as he continues to discover local preferences.

While the food and drink is currently dining room only, Taylor says the team is planning to partner with third-party delivery services as early as February.