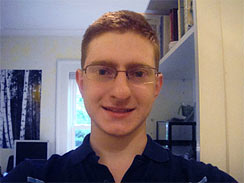 Dharun Ravi got to college to find out his roommate, Tyler Clementi, 18, was gay and quickly shared that fact with the Twitterverse. Clearly, he felt that Clementi’s sexuality was a significant enough issue to merit posting online. And he didn’t stop there.

As we all know, he later used his webcam to stream live video online of Clementi having sex with another male and invited others to join him in this gross violation of privacy.

“Anyone with iChat, I dare you to video chat me between the hours of 9:30 and 12. Yes it’s happening again,” Ravi tweeted.

Clementi discovered this, and, in a surge of despair, left campus, drove to the George Washington Bridge and jumped, ending a life full of promise — only one of five gay teens to commit suicide in recent weeks.

While people debate the role Internet technology and changing notions about privacy played in this tragedy, the real underlying cause is Ravi’s discomfort with Clementi’s sexuality. Rather than respecting Clementi’s privacy, Ravi treated the act of two men making love as if it were a freak show.

But what Ravi did wouldn’t have mattered much if it hadn’t happened in the context of a society that agrees with him. Allow me to explain.

My first-grade teacher at Park Primary School in Boulder’s Martin Park neighborhood used to take perverse pleasure in humiliating me in class.

“Look, everyone, Pamela is writing with her left hand,” she would say, taking the pencil out of my left hand and putting it in my right. “But we don’t do that. We write with our right hands.”

My parents eventually told her to knock it off, and the school was forced to buy left-handed scissors and other implements that enabled me to participate in classroom activities not as a converted rightie, but as a left-handed child.

Being left-handed is a difference. It is an aberration. It is not normal. But for those of us who are left-handed, it is completely normal.

People would be utterly underwhelmed by such an offering, and they would probably conclude that he — not I — had issues.

Live streaming video of someone writing with her left hand? Who cares? And what’s wrong with the guy who posted this?

That’s how this should have played out. Live streaming video of some college kid having sex with another man in his dorm room? Who cares? And what’s wrong with the guy who posted this?

Unfortunately,
two realities converged. The first reality is America’s Puritan
obsession with sex. If one or more people are having sex with anything
or anyone, Americans want to watch it online.

The second reality is more sinister.

Americans
are by and large still in the business of shaming and silencing gays.
As a result, Ravi’s decision to stream Clementi’s sex life to strangers
carried weight, especially with Clementi, who must have felt shamed and
humiliated beyond all redemption.

But
it’s not Clementi who should feel ashamed. It’s Ravi and fellow Rutgers
student Molly Wei, who allegedly helped him, and every person who tuned
in to watch Clementi’s private life unfold online. More than that,
society itself should feel ashamed.

When I confront people who dislike gays, they’re always quick to explain that they do not hate gays. They’re certainly not homophobic. They become angry at the very suggestion. There’s nothing wrong with them, after all. It’s gays and lesbians who have the problem.

Then
they tell me that being gay is unnatural, gross, disgusting and even
repugnant to God. They show up in droves at the polls to prevent
same-sex couples from having the same rights as heterosexual couples —
the right to marry, to inherit, to have spousal job benefits. And
somehow they deceive themselves into believing that they are taking a
stand on behalf of decency and goodness.

But
in truth what they’re doing is dangerous and deadly. Their bigotry,
their ignorance, their arrogant, self-satisfied morality tell gay and
lesbian kids that they should be ashamed of what they cannot help but be.

The
same Internet that enabled Ravi to stream his anti-gay bigotry live for
the world to see also preserves a glimpse of Clementi for those of us
who didn’t know him. Watching him play his violin, something he did with
skill and passion, it’s clear that we as a society have lost something
precious. But our loss is nothing compared to the agony his parents must
feel. He was so young.

Of course, this is a free society.

People
can hate gays, lesbians, blacks, Jews, women, etc., if they so choose.
But the rest of us have an obligation to denounce their intolerance and
to do it loudly so that gay teens grow up hearing that they are
cherished, not feared, not hated, not alone.