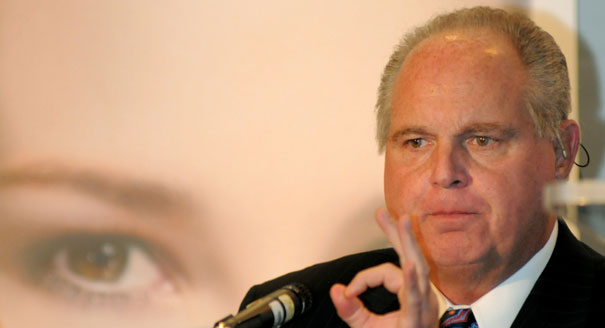 On Feb. 20, Rush Limbaugh said there was no such voting block as “birth control moms,” suburban married mothers for whom contraception is a key issue.

I wonder what he thinks now that 98 advertisers and Hawaiian and Massachusetts radio stations have dropped his show.

Nine days after denying the existence of “birth control moms,” Limbaugh called Georgetown law student Sandra Fluke a “slut” and a “prostitute” after she testified before Democratic Congressional leaders as to why she felt it was vital for contraception to be included in all insurance plans, even those provided by religious institutions. Limbaugh dug the hole deeper when he suggested that young women like Fluke, who are having so much sex they can’t afford enough birth control — sorry, Rush, but the pill isn’t like your Viagra, you don’t take it every time you have sex — provide online sex tapes so that he could get something out of subsidizing their sex lives.

The response was immediate — deep, searing outrage. It wasn’t just feminists who were angry or Democratic women or moderate to left women. It was most women. Wives and college students. Stay-at-home moms and working women. Fashionistas and military officers. It was birth control moms.

Letter-writing campaigns began immediately, with Facebook groups and friends posting and sharing the contact information for the sponsors of Limbaugh’s show. Women I know who seemed not to have a political bone in their bodies surprised me by sending me copies of emails they wanted me to proofread. My own post on Facebook netted more comments than anything I’ve ever posted, with women of all political stripes expressing their disgust.

A personal friend and fellow novelist, Capt. Jessica Scott, an Army officer who has served in Iraq, garnered international attention and landed in the Twitter top 100 with her tweets under #iamnotaslut.

“I am a mother of 2, an Army officer who has deployed. I use #birthcontrol to be a good soldier and responsible parent. #iamnotaslut,” read her first tweet.

She followed this with, “I used #birthcontrol while deployed with my husband so I *wouldn’t* get pregnant & sent home. #iamnotaslut.”

That following Monday, a group of female military veterans issued a statement calling for Limbaugh’s show to be pulled from the airwaves of the American Forces Network for its sexist, objectionable content that is contrary to the mission of the U.S. military.

Women have had enough. It’s not just this single incident involving a foulmouthed gasbag that has suburban moms ready to kick ass and take names. Limbaugh’s sexist stupidity was just the last straw. In the past month, women have watched in disgust as lawmakers, political candidates, pundits and others have launched what feels very much like a war against our sex with “personhood” bills that would limit our health care and contraceptive options; with stupid jokes about keeping our legs together; with transvaginal ultrasound bills that even Republican women said are tantamount to state-sponsored sexual assault; with the offensive suggestion that a woman who spreads her legs for sex shouldn’t mind spreading her legs for a transvaginal probe; and with comments from a presidential candidate that contraception should be an issue for states to decide.

But women are fighting back. Women lawmakers have introduced a variety of invasive health-related bills targeting men, including a bill that would require a rectal exam and other testing before a man can receive drugs for erectile dysfunction and another that would ban men from ejaculating anywhere but inside a woman’s vagina. The Wilmington City Council in Delaware declared that sperm are people, too, passing a resolution that calls on their state legislature to pass a “personhood” bill for sperm that forbids men to destroy their semen.

Though the bills won’t make it onto the floor of any state legislature, they give men just the barest taste of how ridiculous and enraging we women find proposed bills that meddle with our bodies and our health care.

“What GOP war on women?” asked one male commentator.

The war in which conservative lawmakers and pundits try to drag women kicking and screaming back into our grandmother’s century for the sake of some kind of misogynist religious ideology.

I hate to break it to them, but they’re going to lose this war. The birth control moms will win.