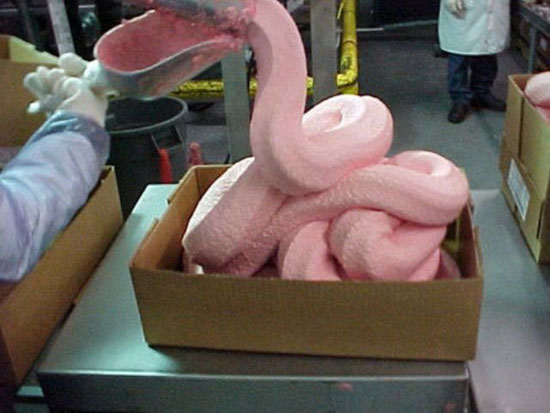 It was so Orwellian it was laughable — three governors touring a factory where connective tissue from cattle carcasses is transformed into a food product the meat industry wants to call “finely textured beef,” but which one USDA scientist dubbed “pink slime.”

Dressed in hairnets, caps and white coats, the governors were led through a Beef Products Inc. (BPI) plant in Nebraska that manufactures the substance. Media were allowed to accompany them and to film and photograph them walking about in their hairnets, but were not allowed to ask questions.

After the tour, the media were then invited to listen while the governors, now apparently experts on pink slime, stumped for the pink-slime industry and stuffed their faces with burgers. The governors — Rick Perry from Texas, Terry Branstad from Iowa and Sam Brownback from Kansas — chastised the media for creating an issue where they insist there isn’t one and causing people to lose good jobs. BPI has reportedly shut three of its four plants due to lack of orders, as grocery stores, including Kroger, have reacted to consumer demand and stopped using pink slime as filler in their ground beef.

Branstad told everyone that America’s obesity problem will get worse if this very lean meat product is removed from ground beef.

“It’s beef, but it’s leaner beef, which is better for you,” he said with a completely straight face.

“Let’s call this product what it is and let ‘pink slime’ become a term of the past,” Texas Gov. Rick Perry said, very clearly driving his message at reporters.

OK, Rick, let’s do that. No more calling it “pink slime.” Let’s call it what it is: ammonia-treated bovine connective tissue.

Hungry now? How odd it was to watch three alleged supporters of free-market capitalism using their taxpayer-funded time to champion an industry that a great number of consumers no longer wish to support. Perhaps they’ve forgotten, but consumer choice is the foundation of the free market. If consumers don’t want ammonia-treated bovine connective tissue in their ground beef, then those who earn their living making and selling ammonia-treated bovine connective tissue might want to reskill and do something else.

That’s capitalism. Unless, of course, you’re getting campaign contributions from BPI, as Branstad is, in which case it’s a crisis that requires a governor’s full attention.

The three burger-munching governors made it very clear that their main concern was jobs. But just because manufacturing a product provides jobs does not mean we need the product. Take cigarettes, for example. If the whole country quit smoking overnight, that would mean a significant loss of jobs — and a huge gain in our health and well-being.

If the food-product industry were paying attention, it would notice a substantial and growing shift on the part of consumers toward eating real food. What is real food? It’s fruits and vegetables that haven’t been doused in chemicals, meats and dairy products without hormones and antibiotics, and whole grains that aren’t processed. It’s foods that aren’t laced with cancer-causing nitrates, dyes, artificial flavors, sodium, high-fructose corn syrup, added sugar and genetically modified ingredients.

More people are growing their own fruits and vegetables, while others are partnering with farms through CSAs (community support agriculture). Still others are shopping at natural food stores where they know what they’re getting. They want control over what they ingest, free from dangerous additives and awkward surprises — like discovering their burgers have long contained ammonia-treated bovine connective tissue.

Some food corporations are beginning to take this to heart. Kroger recently removed the high-fructose corn syrup from some of its store brand breakfast cereals and is proclaiming that fact in bright red on the boxes. Its CEOs know that health-conscious shoppers are reading labels and choosing not to buy products that contain high-fructose corn syrup, so they’re trying to remain competitive.