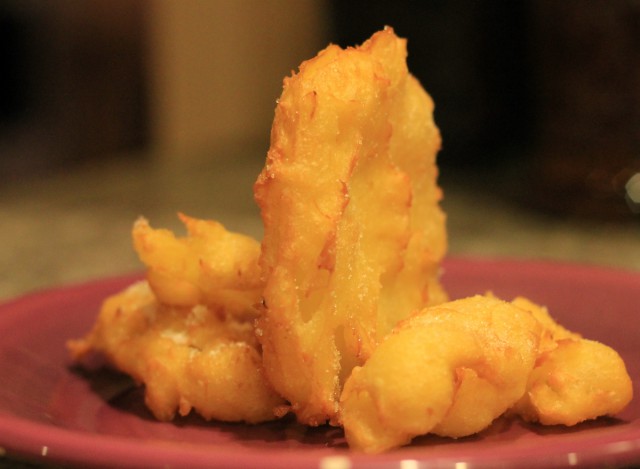 People are always asking me, “Theo, what should I do with all the Choux paste that’s sitting around my kitchen?” And I’m always like, “Can I just get my transfer, dude? I’m in a hurry.”

Choux paste, for those who aren’t familiar, is French plaster made from flour, eggs, butter and milk or water, or both. And not only does it plug small holes in drywall, it also has a few uses in the kitchen, most notably, profiteroles — also known as “cream puffs” if you drive an electric-mobility scooter.

I first discovered Choux in Cooking with Pomaine, Edouard De Pomaine’s delightful book in which he covers a ton of simple French dishes, talks about how fat he’s getting and, just to whet the appetite a bit further, stops midway through recipes to mention things like how sad he is that all his friends are dying.

spoonfuls of the stuff, dusting them with powdered sugar and enjoying them with coffee. That was my introduction to Choux paste. Over a nice latte at home, I munched on crisp-on-the-outside, creamyon-the-inside pastries and checked my email, and thought about how many of my friends were still alive and wondered why that upset me.

Sure, I made profiteroles, filled them with pastry cream, blah blah blah, but ever since the first time I made Choux, I just had the feeling that this stuff, like carbon or money, could be the building block of damn near everything awesome.

Thus, I have dedicated more than a few hours of my life to experimenting with Choux paste, and have come up with some keepers and a whole lot of crappers.

Makes enough to feed 3 or 4 people

1 to 2 apples depending on size

In a saucepan, slowly bring milk, water, butter (cut into ¼-inch square pieces), sugar and salt to a boil.

Once the mixture boils, add flour, and with a wooden spoon, mix over the flame until mixture comes together into a thick paste. When it forms a ball and begins to stick to the bottom of the pan, remove from heat.

Let the pan cool for about five minutes, then add the first egg and mix it in with a fork. It will take some time to incorporate. Be patient. Once it looks less like blood platelets and more like a paste, add the second egg and mix again.

In a deep saucepan, pour oil of your choice (I use canola) and set it to medium. Frying Choux is unlike most other deep-fry applications. If you fry too hot — 350 F for instance — the egg cooks too fast and doesn’t expand. So make sure to keep it around medium and lower if things are cooking too fast and not puffing up.

Cut apples however you want. I’ve cut the entire apple into thin, flat slices or into fries. It works either way. Dredge each piece of apple in flour, then plunge into the paste. You’ll notice that the Choux is resisting. It’s a French thing. Work it in. Massage the paste gently over the apple slices. Sooner or later, it comes around and starts to stick. When it comes to coating the apples, I think the messier the better. The paste is delicious, so glob it on.

As the fritters fry, turn them with a slotted spoon. Remove when they are light brown and immediately sprinkle them with sugar — the recipe isn’t all that sweet, so you can be generous with it.

If you run out of apple and have some paste left, spoon it into the hot oil, watch it expand, and be sure to ponder, just for a moment, your own mortality. Life could be worse.