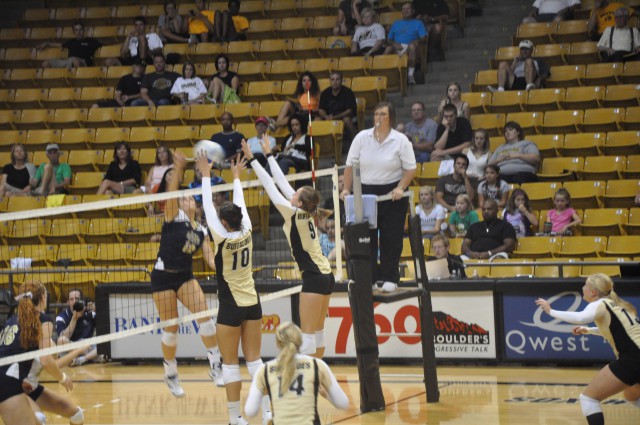 Liz Kritza’s CU volleyball team got off to a decent start in 2011, as the Buffaloes went 2-1 in their opening weekend of competition.

Colorado began the season in Greeley on Friday, where they split a doubleheader against UNLV and UC Davis, beating the former and falling in the nightcap in four sets. CU returned home and defeated Northern Colorado, which was picked to finish first in the Big Sky conference, in five dramatic sets.

“It’s a new team that has a little more maturity,” Kritza said of her team after they defeated the Bears. “I see a little bit more fight and a little bit more confidence — and to see that in the first weekend of play is really promising.”

The Buffaloes will undoubtedly be led by their junior superstar, Kerra Schroeder. A dynamic outside hitter whose ruthlessness in attack could earn her a mention among the best players in the Pac- 12, Schroeder carried the Buffs during a difficult 2010 campaign.

Other dynamic contributors will be senior setter Alyssa Valentine, whose passing precision is a big part of Schroeder’s success; Megan Beckwith, a sophomore libero who leads the Buffs in defense; and Anicia Santos, who will start for the second straight year at middle blocker.

Colorado volleyball remains in a rebuilding process in Kritza’s third season at the helm. CU has only one player (Schroeder) with more than a year of experience in a Buffs uniform. Kritza will once again be relying on freshman contributors. Kelsey English, a Doherty (Colorado Springs) grad, and Nikki Brown figure to record significant playing time as true freshmen.

For a program that has gone 15-42 in the past two years, things seem to be looking up for Colorado volleyball. The recently completed basketball/volleyball practice facility has boosted the perception of the program. It also guarantees that the Buffs spikers will always have a place to practice at all hours of the day. The fact that CU is consistently recruiting and landing some of the nation’s best players (such as Fairview High School’s Nicole Edelman) demonstrates how the facility has improved the program’s image. Kritza’s class of 2012 figures to be among the top 10 in the nation, according to some recruiting pundits.

The administration’s tangible investment in the program may have helped Kritza land an important building block in her new assistant, Leonid Yelin. Yelin comes to Colorado from the University of Louisville, where he was a head coach for 15 years. Louisville enjoyed great success during Yelin’s tenure, competing in 14 NCAA tournaments and advancing to four Sweet Sixteens. Yelin ranks 16th on the NCAA active wins list.

In front of Kritza, Yelin and the Buffs stands a daunting challenge. The Pac-12 Conference is a step up from the Big 12 in terms of competition. Five Pac-12 teams (California, USC, Stanford, Washington and UCLA) find themselves ranked in the American Volleyball Coaches Association’s top 12 teams in the nation.

“For volleyball, [the Pac-12 is] probably one of the best conferences in the world,” said Associate Athletic Director Ceal Barry, who supervises volleyball. “[The move] is great for volleyball.”

Before Pac-12 play begins, CU has business to take care of in its out-of-conference schedule. CU hosts the Slovenian national team in an exhibition on Friday. Colorado closes out the three-game homestand against Albany, one of the top teams in the American East conference. Next week, CU hits the Empire State to compete in the Rose Hill Classic, hosted by Fordham University in the Bronx.