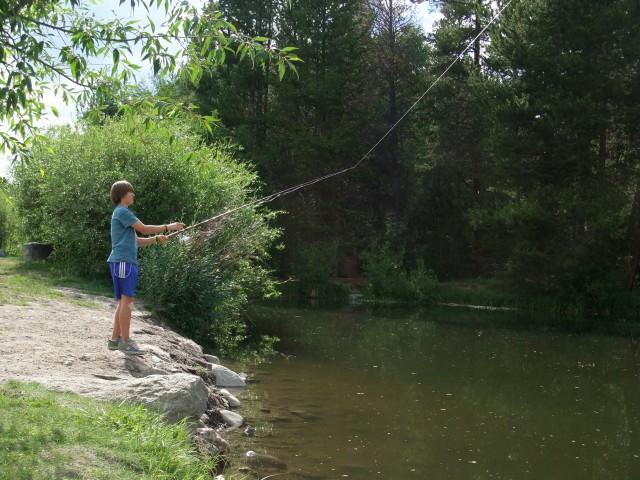 You may want to think twice before frying up that batch of fresh trout from your favorite Rocky Mountain lake. Federal scientists say they’ve found high levels of toxic mercury in fish from many remote lakes and streams around the West, including Rocky Mountain National Park. Brook trout in Mirror Lake and fish in the Upper Colorado River were among the most polluted.

Only 5 percent of the sampled fish had levels of mercury that are directly toxic to the fish themselves. But in about one third, concentrations were above a threshold putting sensitive birds at risk.

Mercury contamination is measured by nanograms per gram of weight — minute measures for an element that is poisonous at microscopic levels.

“It’s a surprise to me,” says Boulder based fishing guide Wallace Westfeldt. “As a guide, it’s irrelevant, because it’s all catch and release. … I do harvest for my home, I do pick high-altitude locations.”

Westfeldt adds that he wants to know more about the mercury contamination.

Only one fish from Yosemite National Park had levels of mercury above the level at which no human consumption is advised, but fish from Zion, Capital Reef, Wrangell-St. Elias, and Lake Clark national parks all contained sites in which most fish exceeded benchmarks for the protection of human and wildlife health. In the Utah parks, says Colleen Flanagan Pritz, National Park Service ecologist and coauthor of the report, concentrations of mercury in small prey fish were especially concerning because the toxins get more concentrated higher up the food chain. More fish should be sampled from those parks to assess ecosystem and human health risks, she says.

In a few spots, direct environmental impacts from the widespread toxic pollutant are starting to show up, but the scientists said the biggest surprise was the great variability in mercury levels from fish living just a few miles apart. Those findings suggest that site-specific chemistry are a key factor.

“We are we seeing toxological responses in some of those parks,” says Collin Eagles-Smith, U.S. Geological Survey ecologist. “Although fish mercury concentrations were elevated in some sites, the majority of fish across the region had concentrations that were below most benchmarks associated with impaired health of fish, wildlife and humans.”

“This is a wake-up call,” says Flanagan Pritz. “We need to see fewer contaminants in park ecosystems, especially contaminants like mercury where concentrations in fish challenge the very mission of the national parks to leave wildlife unimpaired for future generations.”

Mercury is generated during fossil fuel combustion, volcanic eruptions and regionally even from mining activities. Atmospheric mercury levels have increased at least three-fold during the past 150 years, and some ocean fish test positive for potentially dangerous levels on a regular basis.

The widespread contamination across remote backcountry areas may seem surprising, but mercury warnings are not new in Colorado, where the state reports elevated levels of mercury from popular Western Slope fisheries like Elkhead Reservoir, in the northwest, and Rifle Gap Reservoir, where pregnant and nursing women are advised to not eat any of the larger walleye pike.

The bottom-up mercury contamination is concentrated in toptier aquatic predators like pike. More information is available at the state water quality website.

In all, there currently 20 fish consumption advisories posted at the state water quality website.

For now, water experts say they have no plans to issue advisories based on the new data from Rocky Mountain National Park, so anglers won’t know if their favorite stream or lake is contaminated. But more research could spur a state process that eventually leads to a warning.

Mercury is a neurotoxicant. Outbreaks of methylmercury poisonings have made it clear that adults, children and developing fetuses are at risk from ingestion exposure to mercury.

When mothers with no symptoms of nervous system damage gave birth to infants with severe disabilities, it became clear that the developing fetal nervous system is more vulnerable to methylmercury than is an adult’s nervous system.

According to the Centers for Disease Control and Prevention, exposure to high levels of mercury in humans may cause damage to the brain, kidneys, and the developing fetus. Pregnant women and young children are particularly sensitive to the effects of mercury.

The most common way people are exposed to any form of mercury is by eating fish containing methylmercury.

Other exposures include breaking products containing elemental mercury and using compounds that contain mercury. More information is available on the EPA website.

Scientists sampled 19 sites in Rocky Mountain National Park, where the average mercury concentrations were lower than the statewide mean across all parks. Within the park, levels vary more than six-fold, says park biologist Mary Kay Watry. There was no apparent pattern to the contamination, which reinforces the idea that site-specific chemistry and other local factors are critical. Reactions with other substances in the water changes the mercury to a form that fish can ingest, Watry explains.

Mercury levels in most fish from Rocky Mountain National Park were below the risk benchmarks used in the study, but brook trout from Mirror Lake and suckers from the Colorado and Fall rivers showed concentrations likely to exceed EPA human health limits at that could impair bird breeding.

Watry says mercury levels also varied from year to year at some sites, but not at others. All in all, the data suggest that there should be follow-up studies to help characterize the potential mercury risks.

Scientists compared fish mercury concentrations among sites within an individual park, as well as from one park to other parks, and identified areas with elevated mercury levels.

They also compared the mercury concentrations in the fish to a range of health benchmarks including human health guidelines established by the EPA for fish consumption, and wildlife risk thresholds  that indicate the potential for toxicity and impairment in fish and fish-eating birds.

Mercury levels in individual fish at some parks from other states including California, Colorado, Washington and Wyoming also exceeded the human health criterion. The other study states were Oregon, Montana, Utah, Nevada and Arizona.

Mercury is so toxic that an international coalition of more than 95 public interest environmental and health non-governmental organizations from more than 50 countries from around the world was formed in 2005 by the European Environmental Bureau and the Mercury Policy Project to reduce anthropogenic mercury sources to zero — a huge task, given all the potential environmental pathways. Reducing emissions will require a global effort on par with the treaty that curtailed emissions of ozone-destroying chemicals several decades ago.

Talks under the auspices of the United National Environmental Program are ongoing. In October 2013, international delegates agreed on the text of a global mercury convention, which has 97 signatures but only one full ratification.

In the U.S., the Natural Resources Defense Council tracks mercury issues, calling for stricter EPA regulation of industrial emissions, including power plants. These industrial facilities are the second-largest source of man-made mercury emissions in the United States.

New standards under consideration would cut many tons of mercury each year, but industry is fighting back. Standards for industrial boilers adopted in 2013 face a legal challenge. As a result, there are currently no national limits on toxic air pollution from industrial boilers — and these standards are already almost a decade overdue.