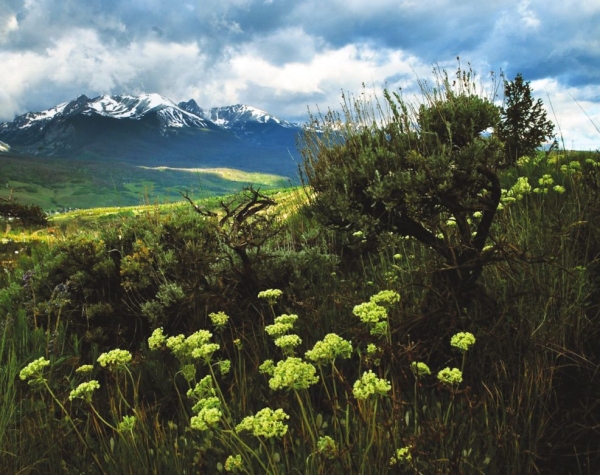 Anyone who tackles a tough summit like Tenmile Peak, above Frisco, probably is already tuned in to the risks of the high alpine zone — rockfall, changeable weather, equipment failure. But a snowboarder who was injured in a May 2010 avalanche on the peak may add a new item to the list of dangers — climate change.

The spring slide that resulted in a lengthy helicopter rescue was partly to blame on a gritty layer of desert dust blown into the Rocky Mountains from the drought-sapped Four Corners area. As the region warms and dries, the storms have become more frequent and intense.

For mountaineers, that means each dark dust layer melts a little bit (or a lot, depending on the time of year) and then refreezes into a crust that can become a sliding surface for any subsequent snowfall.

Global warming will play out in many unexpected ways in the Colorado mountains, but some of the consequences are clear: Some species will just disappear as they are pushed up and off the mountain tops.

But some of the effects are more subtle.

High above Keystone Ski Area, along Peru Creek, the abandoned Pennsylvania Mine has been seeping acid mine drainage into the stream for 100 years. For miles downstream the water is so polluted that it can’t support insects or fish. It’s a dead stream, and when scientists noticed pollution levels going up, they discovered that melting permafrost in the alpine zone may be a factor.

“This is a really undisturbed watershed as far as anything that might change the water chemistry,” says U.S. Geological Survey scientist Andy Manning. “It’s really important to be clear about the conclusions. What we found is that the concentrations are going up. Then we laid out some hypotheses, and the cause appears to be climate warming, in general.”

Since there are no significant anthropogenic causes for the increases, the researchers started with what they knew. During the study period, local mean annual and mean summer air temperatures increased at a rate of 0.2- 1.2 degrees Celsius per decade.

“Temperatures are clearly warming. The statistical evidence is solid on that. So then you can ask, what is it about warming that could increase metals?” Manning says. “If you warm the system, the reaction rates go up, but probably, the warming in Upper Snake is not enough to be the main cause directly.”

That leaves a couple of other possibilities, and Manning says the researchers hope to follow-up studies to pinpoint the cause.

“For one, it’s possible that when you warm the mountains, then the amount of water that’s being used by plants goes up. That means there’s less for infiltration and water recharge,” he says.

That means more rocks and soil are exposed to air for longer periods of time, which could increase the weathering process that dissolves the minerals, which subsequently reach the stream.

“The other possibility is this melting of frozen ground,” Manning says. In permafrost soils, the spaces between the particles of earth and rock are filled with ice, resulting in a relatively impermeable mass.

There’s not a lot of detailed permafrost mapping in Colorado, but geologists assume that some of the highest slopes, especially in wind-scoured, north-facing terrain, includes some permanently frozen areas.

Manning says that if that layer were to thaw, it would create more of a “Swiss Cheese” texture, with new spaces for water and air, once again introducing more oxygen that promotes the weathering process.

“This study provides another fascinating, and troubling, example of a cascading impact from climate warming as the rate of temperature-dependent chemical reactions accelerate in the environment, leaching metals into streams,” says U.S. Geological Survey director Marcia McNutt. “The same concentration of metals in the mountains that drew prospectors to the Rockies more than a century ago are now the source of toxic trace elements that are harming the environment as the planet warms.”

Deep in the heart of the state’s wildest mountains, near Gothic, University of Maryland biologist David Inouye has also been tracking the effects of global warming. In the forests and meadows at the Rocky Mountain Biological Laboratory, he’s painstakingly counted wildflower blossoms for decades.

Graceful glacier lilies, for example, are one of the first flowers to bloom when the snow melts, but the research shows they are blooming 17 days earlier than in the 1970s.

The hummingbirds are also migrating a bit earlier, but perhaps not soon enough — by the time they arrive, many of the nectar-laden plants have withered away. Biologists calculate that if current trends continue, in two decades the hummingbirds will miss the first flowers entirely.

Disruption of the delicate balance between flowering and the nesting cycle could make it difficult for the birds to sustain their populations at the northern end of their range. The hummingbirds only lay two eggs per year and have a relatively short lifespan of only two years. Within a few decades they could disappear from the Southern Rockies, researchers suggest in a new study based on the findings at the lab.

Inouye started monitoring twometer-square study plots at the lab in 1973, counting all the flowers every other day, and documenting year-toyear changes about 100 species.

“Plants that flower early in the season are changing a little faster, but all of the species out here are changing their phenology,” he says, adding that this year the glacier lilies won’t be producing any seeds because of the unusual winter and spring weather.

The plants are long-lived, so it won’t wipe out the population, but it could be a long-term problem, especially if similar weather patterns prevail more frequently, he says.

These rapid climate-driven changes in plant communities are having a cascading effect on other species throughout Rocky Mountain ecosystems.