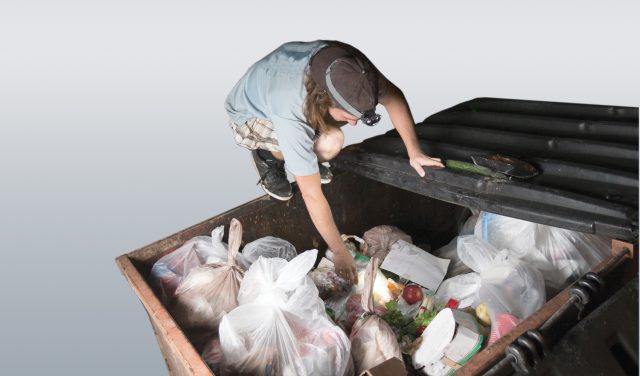 Under a full moon on a frosty December night, two advantageous Boulderites make the most of a hole in the system.

“You wouldn’t believe the amount of produce that comes in here,” says a man who introduces himself as Yashua. “Sometimes there’s nothing, but one time I got, like, six cases of organic celery.”

Yashua isn’t leisurely strolling through stocked aisles in a grocery store. Rather, he’s canted torso deep in a dumpster near a grocery store in downtown Boulder. He’s a self-proclaimed “barefooter,” but he “brings slip-ons just in case it’s crazy.”

Yashua is joined by another diver and longtime Boulder resident who requested to remain anonymous. It’s collaborative work — as Yashua leans over the edge, the anonymous diver guides him by looking over from the side.

Yashua finds a pack of unopened butter and offers it to his fellow diver.

“I have a bunch of butter,” the second diver replies. “I just dumpstered. You should have the Kerrygold because I found like three or four of those just last week.”

Together, they collect three 25-pound produce boxes full of the night’s loot: cilantro, beets, peppers, yogurt, potatoes, onions, green beans, squash and a papaya. The assortment of goods makes the dumpster smell more like a farmers market than throwaways destined for the landfill.

Both divers have a few regular dumpsters they check out around town, but never really know what they’ll find.

According to ReFed, a nonprofit dedicated to ending food waste across the U.S., 35% of all food goes unsold or uneaten in the country, and most of that goes to waste — to the tune of 229 million tons.

Boulder Food Rescue co-founder Hayden Dansky says there’s a “big problem around food waste,” in Boulder. Dansky started the nonprofit in 2011 after they saw healthy foods ending up in dumpsters. They realized the discarded food could be diverted to families in need.

“When you think about a place like Boulder, oftentimes people are like, ‘Oh, Boulder is very affluent, nobody’s struggling here,’” Dansky says. “Which really excludes a lot of community members.”

Boulder Food Rescue estimates nearly 15,000 residents in Boulder alone are experiencing some form of food insecurity. To reach those people, the organization utilizes more than 150 volunteers to move 1,500 pounds of produce a day from 22 food sites to 39 recipient sites, mostly by bicycle.

Community Food Share, a food bank based in Louisville that works closely with Boulder Food Rescue, estimates one in 10 citizens are food insecure in Boulder and Broomfield counties.

But not everyone turns to dumpster diving.

Folks dive for different reasons — some to save on their grocery bill, to clean up waste or to get fresh vegetables. Yashua says most of the food he finds, he cooks for others. His anonymous friend does it because the amount of waste he sees bothers him and because he saves money — spending $25 or less a month on groceries. If he finds exorbitant amounts of food, he says he distributes it to people experiencing homelessness.

“It’s crazy to see how much waste there is,” says the anonymous diver, who claims to have once pulled $3,000 worth of plastic-covered prepared meals from a Whole Foods dumpster.

But, he isn’t always that successful with his finds.

He’s cautious with what he decides to eat. He uses an infrared temperature laser gun, looks for bulges and mold and watches it over a few days in his fridge. He’s mostly looking in dumpsters for fresh produce (which he washes before eating) and stays away from meat and warm foods.

Diving itself isn’t against the law, but people could receive a misdemeanor for trespassing or littering while dumpster diving, which could lead to a fine or a court date. According to the Boulder Police Department, this isn’t very common.

While Community Food Share doesn’t dive, it aims to keep that waste out of dumpsters. The organization distributes over 22,000 meals a day — roughly equivalent to feeding everyone in a sold out Ball Arena — and rescues 24,000 pounds of food a day that would otherwise go to waste.

The organization distributed more than 8 million meals to 40,000 people in 2022, but it has seen a 52% increase in the number of households it served over the year.

Trevor Bosetti works at Community Food Share and has seen the high demand for services first-hand.

“Every week, it seems like there’s more and more cars lined up outside, just hoping that this is a valid alternative for them over the sharp increase in prices across the board,” he says.

Dansky has also noticed food insecurity on the rise in Boulder.

“What we’ve been seeing lately is, with inflation and the cost of living going up again this year, [food insecurity] is back on the rise.”

Dansky explains that when money is tight, food is one of the first things to go. Food insecurity doesn’t necessarily mean people are hungry, but could look like skipping meals or having less nutritious foods.

The U.S. Department of Agriculture predicts food prices will continue increasing in 2023.

Even with Community Food Share and Boulder Food Rescue’s efforts, Dansky says there’s still “a lot of food going to waste,” though neither they nor Bosetti could point to specific numbers.

At grocery stores, high employee turnover rates, people misunderstanding labels (“sell by,” “use by,” “best by”) and customer expectations/industry standards to have full shelfs with perfect produce on display can help push edible food off the shelfs. When grocery stores receive new shipments of produce, the newest and freshest are often put on display. Some of the older food goes to food distribution organizations, but other foods are disposed of.

Grocery stores must also follow the Colorado Retail Food Establishment Rules and Regulations, which gives guidance for handling food and when it is appropriate to throw away (for examples, see 3-701.11. A-D).

Danksy says Boulder Food Rescue works at the intersection of food waste and food insecurity, and is seeking to change the system using a holistic and community-led approach.

“I don’t think you can blame dumpster divers or store employees for doing what they are doing,” they say. “[These people] are people doing their best and surviving within a larger exploitative system that is tragically failing both the people and this planet.”

Surviving within a larger system’s flaws is the bread and butter of dumpster divers like Yashua. Tonight’s scavenger hunt is over, the slip-ons are off, and he’s heading home with arms full of produce.